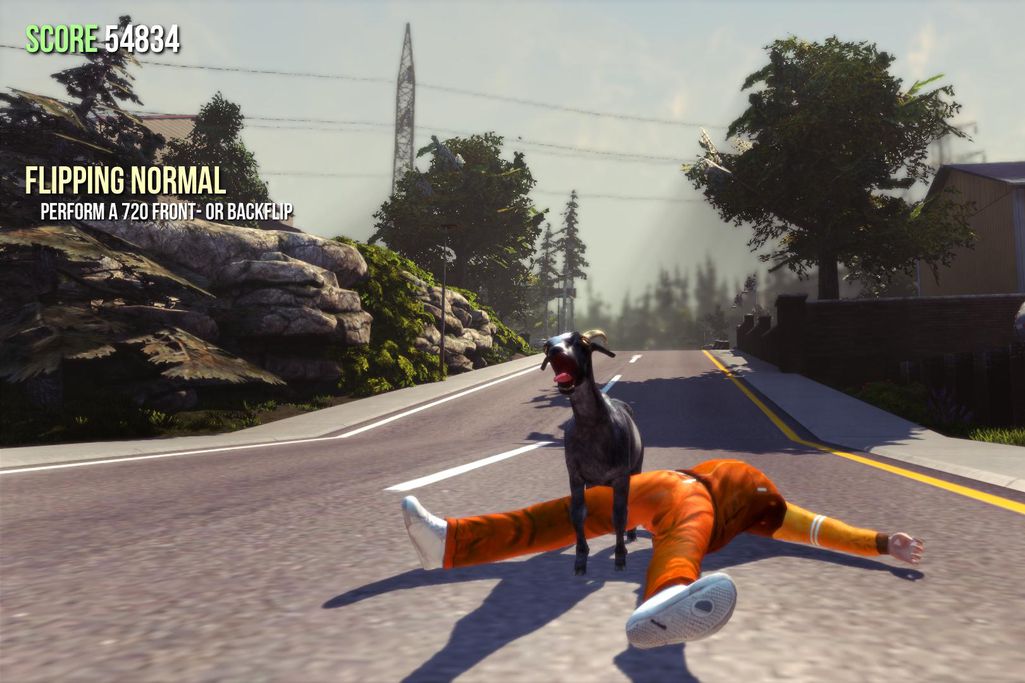 True to its name, Goat Simulator starts you innocently enough: in a goat pen, with nothing but a sticky tongue and a hard skull to your name. Across the street, some protesters are holding a rally. You ram a lamppost into the crowd and headbutt the survivors, glitching several feet backwards as you try to lick one of their signs: NO PENIS SHAPED FOOD. An empty pool filled with trampolines is just down the road. You bounce across them and into a construction site, where you find a jetpack. Momentarily crumpling after a three-story drop, you climb midway up a crane and jump off, careening into the parking lot of a gas station. You headbutt the tanks and are blown back as the station explodes and collapses into a pile of rubble. 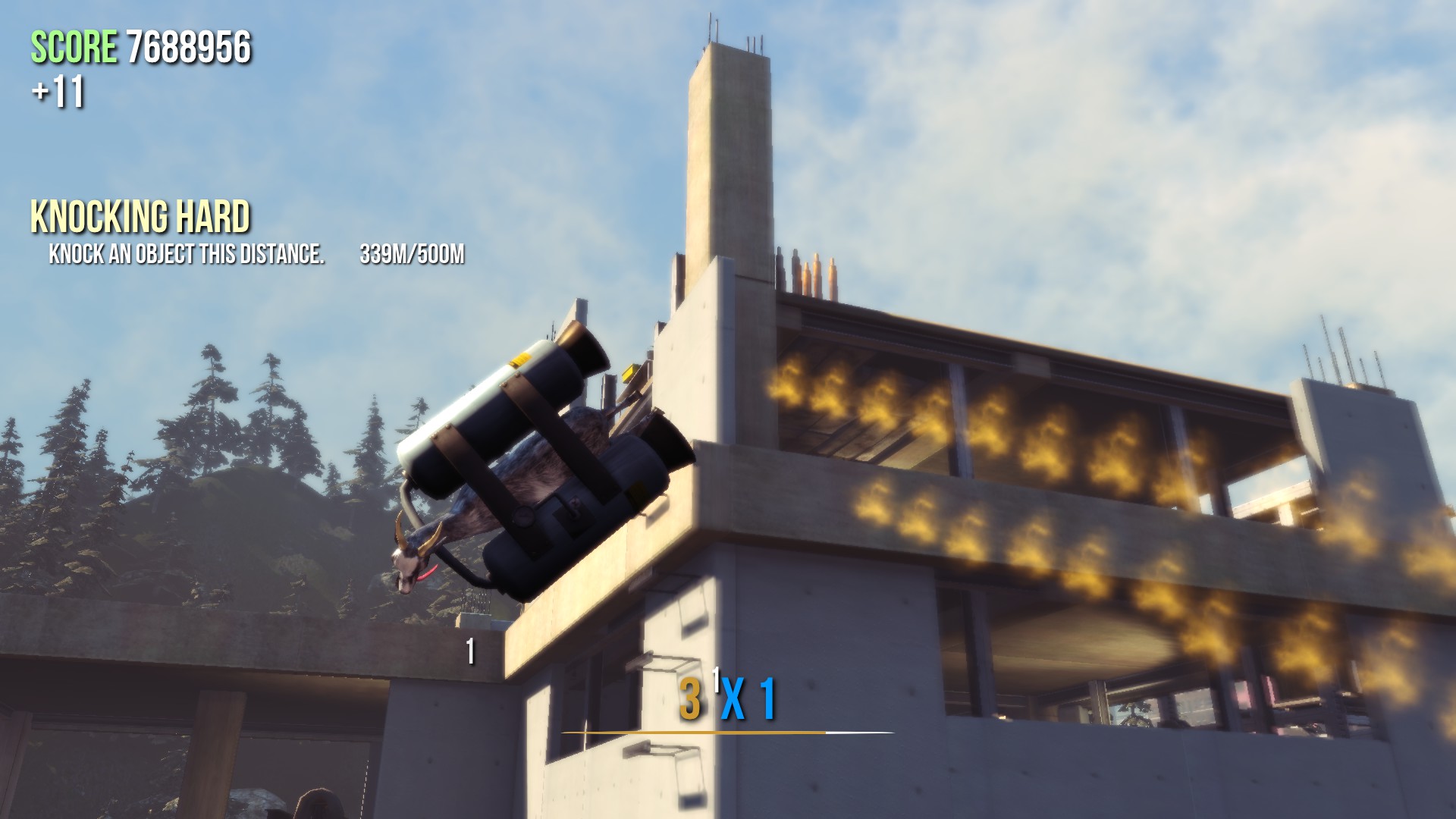 And that’s before things get really weird. I’ve made sacrifices to dark gods, become king of the goats, and run myself through a wheat thresher more times than I can count. It’s not hard to do most of what Goat Simulator has to offer in a single sitting, but there’s enough in there that it’s hard to be sure you’re not missing something. It wasn’t until I was flying maybe a hundred feet in the air, for example, that I noticed the giant glowing pentagram.

Since Goat Simulator was announced in early February, people have been asking one question: "Wait, that’s a real game?" Created as an experiment by Coffee Stain Studios, known for its Sanctum tower-defense series, it is in fact a real game in which you play a sociopathic goat who occasionally has superpowers.

But the question isn’t just an expression of disbelief at the zany subject matter. It’s an indirect way of asking whether the game needs to be made at all. Once you’ve got the basic premise ("an old-school skating game, except instead of being a skater, you're a goat, and instead of doing tricks, you wreck stuff"), is there any point in seeing it through? Is there a reason that Goat Simulator should require the transfer of actual legal tender and about a gigabyte of data onto your hard drive?

Conceptually, Goat Simulator is comparable to Surgeon Simulator 2013, another game jam experiment that became a full-fledged cult hit last year. Both are slapstick physics games that spoof the straight-faced European simulator genre, home of titles like Farming Simulator and Street Cleaning Simulator. But the fun of Surgeon Simulator is in how hard you have to work to do something as simple as pick up a phone. In Goat Simulator, neither the laws of man nor physics can stop you from doing just about whatever you want. It’s a very different game, the sort that asks you to push its limits in every sense of the word, even if those limits aren’t terribly challenging to reach.

'Goat Simulator' is, to put it mildly, buggy

Goat Simulator is, to put it mildly, buggy. It’s not uncommon to get accidentally stuck inside a prop or in some tiny gap between two large pieces of scenery, sometimes wearing several large metal accessories and dragging a hapless pedestrian with your 3-foot-long tongue. When you climb, your head and neck gyrate grotesquely. It’s possible to be thrown outside the game’s map into a no-man’s-land of rough textures and invisible walls, or to be dragged through the sky by some inexorable force if you fly too far into the void.

At some point, it stops being a broken game and becomes a game about brokenness. Your goat accrues special powers and equipment like the jetpack, but it’s all toggled with the same key, making it just a matter of time before something goes horribly wrong. At one point, I found myself rapidly pelting protesters with a back-mounted pitching machine while making dead goats fall from the sky — it’s a long story — and started receiving error messages as the game frantically tried to spawn enough objects to satisfy my orders. I wasn’t just wreaking havoc on characters, I was wreaking havoc on the game.

The fun of watching a game’s code go insane is why we watch glitch-heavy speed runs or videos of Red Dead Redemption’s uncanny flying bird-cowboys. What Goat Simulator has done is package that feeling of peeking behind the scenes into something weird but accessible, unhampered by the constraints of actual, serious gameplay. 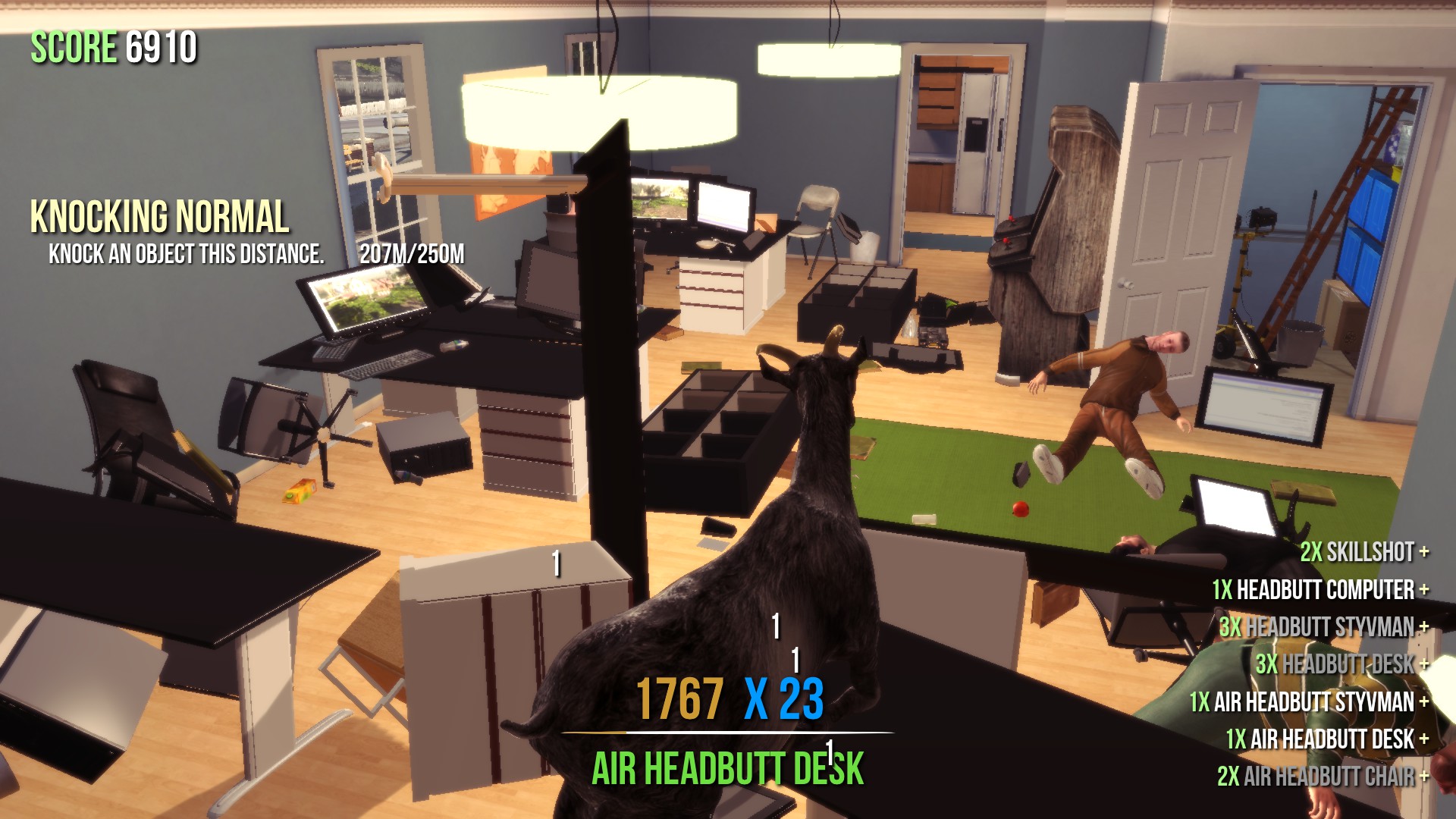 What’s interesting about Goat Simulator is how close these broken, buggy features sometimes come to clever gameplay. While I’m sure a small group will dedicate itself to climbing the leaderboards (fairly or unfairly) by playing for things like high scores and the longest time airborne, that group will not include me, especially since the current record for the latter is 2.5 years. But there are all sorts of weird throwaway mechanics to be mixed and matched — you can temporarily turn your goat into a limp rag doll, enter slow motion, or get an achievement by hitting the "bleat" key.

More importantly, you can start custom games where you select "mutators" that change how your goat looks and behaves. The mutators Coffee Stain has added are funny but often pointless: one turns you into a "tall goat" (giraffe) and "Yoshi goat" gives you bomb-making powers. But you can also browse player-created mods through Steam’s Workshop, where people have begun adding new maps and mutators that range from wiggly legs to infinite jumps. A few fall somewhere between cheat codes and genuinely new gameplay options, and you haven’t played Goat Simulator until you’ve spent several minutes flying around in a tangle of goaty limbs, trying to figure out whether your teleportation power is the reason you’ve suddenly plunged straight through the surface of the map.

Goat Simulator is deeply of its time and place, in a way that goes beyond the Flappy Bird clone found inside one house. It relies on a gaming ecosystem full of wikis and achievements that guide players and a modding community that’s happy to put out fan patches and custom content. Without knowing that goals like "Sacrifice for a greater purpose" or "Hit the party with the Boulder of Death" exist, it wouldn’t be unreasonable to spend a few minutes running around, blow up a gas station, wreak a little havoc at a party, and shut the game down, wondering what the fuss was about. Without the hope that somebody will be putting out new maps and adding new powers to what’s essentially a one-off gimmick game, there’s much less incentive to come back.

And Goat Simulator is, indubitably, a gimmick. It’s a single-serving, self-awarely broken playground with a lot of loose objects, an arbitrary score counter, and a clever outlay of pop culture Easter eggs. The developers themselves seem mildly bemused at the fact that people want to buy it. Central to the gimmick, though, is an invitation to look closer at how games are made, on a level that’s less intimidating than a sandbox tool like Garry’s Mod. The rough map, the bugs that were never squashed, the skybox that you can knock your head on if you go high enough — they’re all glimpses of things developers try to make sure you never see in more serious games.

You don’t owe it to anybody to play a broken game, no matter how instructively it’s broken. But Goat Simulator certainly delivers on its promise. You are a goat. You wreck stuff.

You wreck lots of stuff.