Samsung's "Next Big Thing" advertising campaign, which frequently cracked fun at people standing in line outside of Apple stores for product launches, drove Apple's marketing chief Phil Schiller crazy. That's according to Samsung, which is in the process of drawing out volumes of internal Apple documents as part of its lawsuit with the company that kicked off this week in a California court.

"We will show you internal Apple documents, documents that haven't been made public before, and showed how Apple was really concerned about competition from Android, and in particular Samsung," John Quinn of law firm Quinn Emanuel Urquhart & Sullivan, which is representing Samsung in the trial, told an eight-person jury. "This new, edgy marketing strategy ... it drove Apple crazy."

For proof, Quinn brought out an internal email from Schiller to his team that highlighted a story from The Wall Street Journal last January entitled "Has Apple lost its cool to Samsung?" Schiller's one-line email said simply "We have a lot of work to do to turn this around." 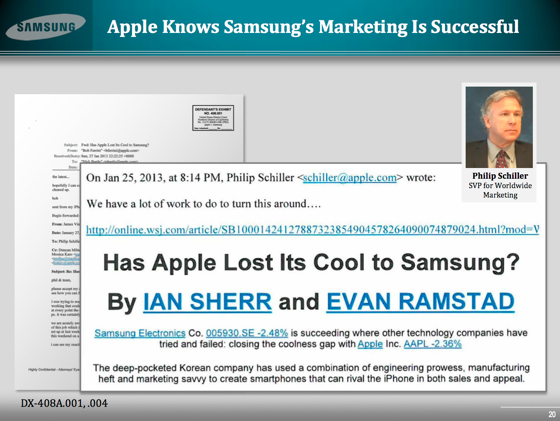 Quinn says Schiller became "obsessed" with the campaign, writing CEO Tim Cook to suggest the company look into using another ad agency instead of its mainstay TBWA\CHIAT\DAY. That even led to Apple board discussions over the issue, Quinn added.

Schiller is Apple's first witness once both companies are done with opening statements for this trial, which is slated to run the whole month, though is kicking off in earnest today. Apple's asking for $2 billion in damages, while Samsung's returned fire for more than $6.9 million.