Before being brought to life by the indomitable Kevin Peter Hall, the eponymous villain of the original Predator movie was to be portrayed by Jean-Claude Van Damme. As an interview with special effects specialist Steve Johnson reveals, the original design for the Predator was very different to the character that made it to cinemas. "It was awful," says Johnson, "It was ahead of its time, let's put it that way. But the head did suck."

The original monster looked like an ungainly reptile creature with large eyes and exposed muscles. Footage of a young Van Damme filming in the Mexican jungle shows an all-red version of the suit that would later be used "cloak" the Predator in post. In red, the character looks something like an unfortunate cross between ALF and Spiderman.

Van Damme was apparently displeased with his role in the film, and with the costume. "He was just off the boat from Brussels, he thought he was going to show his martial arts abilities to the world," says Johnson. After being fitted with the bright red suit, it became clear that Van Damme had not been properly informed of his role in the movie. "He thought this was actually the real look of the monster in the movie and he [said] 'I hate this. I hate this. I hate it. I look like a superhero.' He was so angry." Johnson then explained that the suit was red because it was a cloaking device and he was to be invisible for large portions of the picture, "which made him even angrier because he thought he could do his martial arts, he could fight Arnold Schwarzenegger. Impossible. Absolutely impossible." 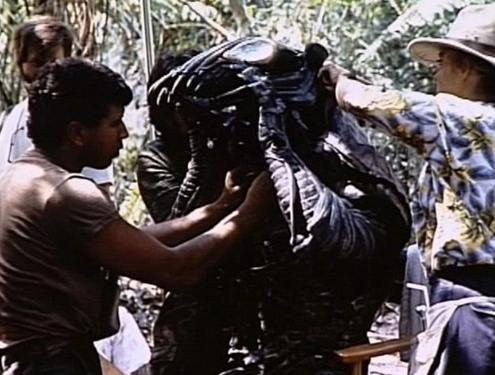 Van Damme in an early version of the Predator suit.

The aspiring actor was eventually replaced by Kevin Peter Hall, who at over seven feet tall lent the Predator his considerable stature. Van Damme would go on to shoot Bloodsport, the breakout 1988 hit that gave him the opportunity to showcase his martial arts talents to the world. The full interview with Johnson runs for over two hours and covers far more of his career. It's available for viewing at the Stan Winston School of Character Arts, which also has a number of photos of the original Predator suit and design.