A record settlement will see $1 billion spent on cleaning up abandoned mines, but experts anticipate decades of work ahead

Charley, a 62-year-old political and social activist, has lived his entire life on Navajo territory in New Mexico, and he speaks of its beauty with both reverence and melancholy. In the 1940s, just before he was born, a uranium mining boom swept across the Navajo Nation and other parts of the western United States, and soon accelerated as the US looked to expand its nuclear weapons program during the Cold War. The economic opportunities at first seemed bright for the Navajo, though they didn't fully understand the scope of the industry, or the risks it entailed.

The mines closed in the 1980s, but their toxic legacy lives on in the Navajo Nation. Radioactive waste contaminated soil and water supplies, and many of those living nearby were afflicted with cancer and other chronic health problems. US authorities launched an extensive cleanup program in 2007, though the process has been costly and slow, and hundreds of abandoned mines and contaminated areas remain untouched.

A billion-dollar settlement, but still not enough

Determining liability for the damages has also proven difficult, as many of the mining companies that once operated in the region have since gone out of business. But now, the government has taken a major first step: last week, the US Justice Department announced that energy company Anadarko Petroleum Corp. has agreed to pay $5.15 billion to clean up widespread contamination and pollution caused by Kerr-McGee, a Texas-based subsidiary with a long history of toxic business practices. Over the course of 85 years, Kerr-McGee's factories spread deadly chemicals and pollutants in several regions across the US — including the Navajo Nation — but prosecutors argued that the company avoided liability by spinning off its operations into a chemical company that later declared bankruptcy.

The settlement is the largest ever handed down by the Justice Department in a case involving environmental contamination, surpassing even the BP oil spill of 2010. Most of the money will go to cleanup efforts at more than 2,700 locations across the US — including nuclear fuel plants and rocket fuel facilities — with more than $1 billion going to the Navajo Nation.

Kerr-McGee once operated more than 50 uranium mines in the Navajo Nation, which encompasses some 300,000 people spread across Arizona, New Mexico, and Utah. From 1944 to 1986, about 4 million tons of uranium ore were extracted from Navajo lands and used to produce nuclear weapons. The boom brought thousands of new jobs to the reservation, but wages were low and workers were unaware of any health risks, despite strong research linking radiation exposure to cancer and other ailments. Radium and radon, formed when uranium decays, have been linked to lung, bone, liver, and breast cancers, and uranium has been known to cause liver damage. 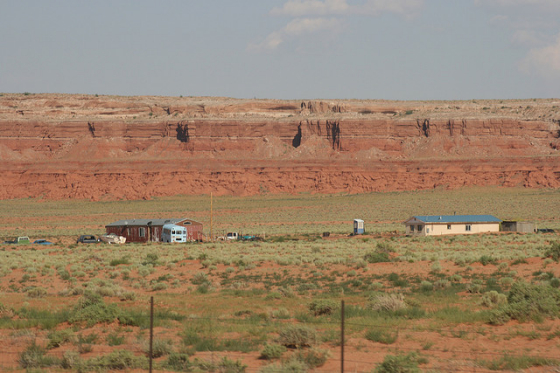 Public health experts say this month's settlement is an important first step, though they warn that significant challenges remain. The $1 billion that the Navajo Nation will receive is expected to cover only about 10 percent of the more than 500 abandoned mines that remain on tribal lands, and the true extent of the damage remains unclear due to a lack of health and environmental studies.

"This settlement — and the fact that it comes now, in 2014 — speaks to the problem of how to respond to this kind of environmental contamination, not just in the Navajo area but also in the rest of the country," says Doug Brugge, a professor of public health at Tufts University who has written about the history and impacts of uranium mining on Navajo lands. "Even that billion dollars that would go to the Navajo area, that's not going to be enough to deal with all the remaining mines there."

Brugge grew up on a Navajo reservation during the 1960s and '70s, and although his family wasn't directly affected by the uranium industry, he says it wasn't uncommon to see children playing in contaminated water and dirt. Many Navajo homes were built near mining areas, and sometimes with radioactive materials. There have been catastrophes, as well, with the 1979 Church Rock spill being the most infamous. That accident released more than 1,100 tons of uranium waste and nearly 100 million gallons of radioactive water into the environment, marking one of the worst radiation disasters in history.

"Money talks, and the people suffer."

Families affected by the mining have received compensation through a federal law enacted in 1990, but federal cleanup efforts have been hampered by budget shortfalls, tangled bureaucracy, and technical challenges. Between 2008 and 2012, the Environmental Protection Agency (EPA) and other agencies spent $100 million to clean up the area, in addition to $17 million spent by companies deemed responsible for the contamination. So far, though, assessments have been carried out on just 10 abandoned mines, and the government is still working to gauge the scope of the contamination. Stephen Etsitty, executive director of the Navajo Nation EPA, says it may be another 50 to 75 years before even half of the 525 identified mines are fully cleaned up.

Those at risk are left with few options. Annual per capita in the Navajo Nation is only $6,000, according to the 2010 US Census, and poverty rates are above 65 percent. Moving away from the reservation isn't really an option either, especially for a culture with such deep ties to a land they hold sacred.

"People stay where they were born," says Paul Robinson, research director at the Southwest Research and Information Center in Albuquerque. "They don't have another place to go. There's not extra land. The land they're responsible for is part of their heritage and it's transferred to their descendants."

Navajo leaders have banned the mining of uranium ore and outlawed its transport across their land. But some are looking to loosen these restrictions to allow mining companies just outside of the Navajo border to transport uranium across their territory. Supporters of the initiative say it would bring economic benefits to both the Navajo Nation and New Mexico, and that it would be conducted under strict safety regulations. But Charley and other anti-mining activists have their doubts.

"Obviously behind there is some man running around with some mega-bucks," he says. "Money talks, and the people suffer."