This miniature robotic printer rolls across a sheet of paper

Share All sharing options for: This miniature robotic printer rolls across a sheet of paper

Would you replace your desktop printer with a tiny robot that prints by creeping across a sheet of paper? Zuta Labs, which recently launched the Pocket Printer on Kickstarter, hopes so. The Pocket Printer, fundamentally, is a robotic Ouija planchette containing an inkjet printer head. Place it on a piece of paper, and it will slowly roll across it with an omnidirectional wheel system, printing as it goes. Currently, it can sync with computers, and the team is working on an Android and iOS app; it's supposed to be a printer you can take anywhere, although most people would probably just leave it on a desk in lieu of the standard box. 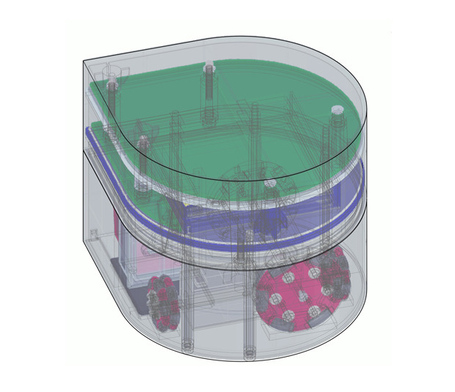 Unsurprisingly, its convenience comes with some limitations. The estimated print speed is about 1.2 pages per minute, compared to 10 or more pages per minute for a desktop inkjet printer, and its resolution is currently an unimpressive 96 x 192 dpi. It runs on a rechargeable battery that gives you about an hour of print time, and one cartridge is good for 1,000 standard pages; that's not the greatest yield you'll find for a printer, but it's several times higher than some standard desktop inkjet cartridges. The pointed end is designed to tell you where to set it on the page, but the obvious worry is that unless you have a perfectly flat surface, correctly align the arrow, and avoid any bumps or tilts, you'll get a crooked print job. For multiple pages, the printer will stop at the end of one, then wait for you to pick it up and put it down on the next.

Adorable experiments like the Little Printer aside, home printers are loathsome and frustrating beasts, so Zuta Labs can go far simply by offering something different. It can be configured to print for any size of paper, and in theory it can even print on other kinds of surfaces, which makes it a lot more flexible than the standard inkjet, assuming it actually works. In its promotional video, the team shows off a prototype without the roughly four-inch-tall polycarbonate shell, successfully printing a message to Kickstarter backers. For now, it's grayscale only, but a color version is planned for the future.

The final question is whether the Pocket Printer can actually make its hefty $400,000 goal; right now, it's sitting at around $10,000 with 29 days to go. To get a printer as part of the campaign, you'll have to pay at least $180, which makes it a bit more than an impulse buy. In addition to the Kickstarter, though, the team says it's gotten "cooperation offers" from investors, accelerators, and Microsoft, which invited Zuta Labs to present at its Israeli Think Next conference.