For one day, Google will let anyone in the US buy Glass

Share All sharing options for: For one day, Google will let anyone in the US buy Glass

Google is about to make its biggest push yet to get Glass in the hands of as many people as possible. The Verge has obtained documents indicating that the company will open up its "Explorer Program" and make Glass available to anyone who wants to purchase a pair, possibly as soon as next week. It’ll be a limited-time offer, only available for about a day, and only US residents will be eligible to purchase the $1,500 device. Google will also include a free sunglass shade or one of its newly-introduced prescription glasses frames along with any purchase. An internal Google slide shows that the promotion may be announced on April 15th, though all the details of this program have yet to be finalized. 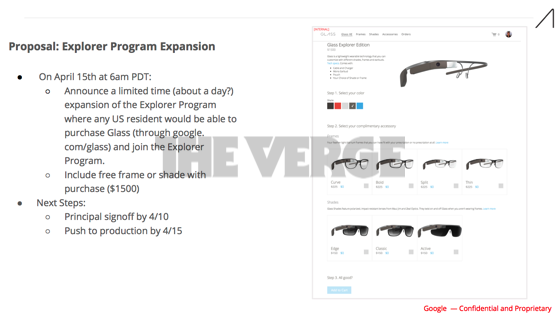 While this program will make Glass available to anyone in the US who wants to buy it, Google makes it clear on the leaked slide that this is an expansion of its existing Explorer program, not a full consumer release (still expected for later in 2014). It sounds like Google simply wants to get the device in the hands of as many people as possible for testing and development purposes ahead of that launch. Alternately, it could be Google's way of clearing out Explorer edition stock ahead of the full consumer launch.

A big push for Glass ahead of its eventual consumer release

Previous implementations of the Glass Explorer program have come with limitations of their own — Google first started accepting pre-orders for the device nearly two years ago at Google I/O 2012. That brought in about 2,000 orders, and another 8,000 people got their hands on a pair through a wider promotion later that year in which consumers told Google what they would do if they had their own Glass headset. Since then, Google has made Glass available through some smaller campaigns as well as opening up friend referrals and an ongoing waitlist to become an Explorer — but this new program could symbolize Google’s last major effort to ramp up the developer community ahead of the official Glass launch.

Update April 10 4:05PM: Google has officially announced its plan to sell Glass for one day only. In a Google+ post, the Glass team confirms that anyone in the US can purchase Glass on Tuesday, April 15th starting at 9AM ET. Google says orders will include the free sunglass shade or prescription lens frame, and notes that supplies will be limited. You can purchase at this link next Tuesday.