Sony is finally bringing its slimmer and sleeker model of the PlayStation Vita to the United States, releasing it as part of a $199.99 bundle that includes Borderlands 2 and an 8GB memory card on May 6th. The redesigned Vita, sometimes called the Vita 2000, went on sale in Japan last October and came to the UK this February. With its bundled deal and broader availability, the Vita is now a more competitively positioned handheld gaming device than ever. We're taking a look across the landscape of current handhelds to see how the new Vita fits in. 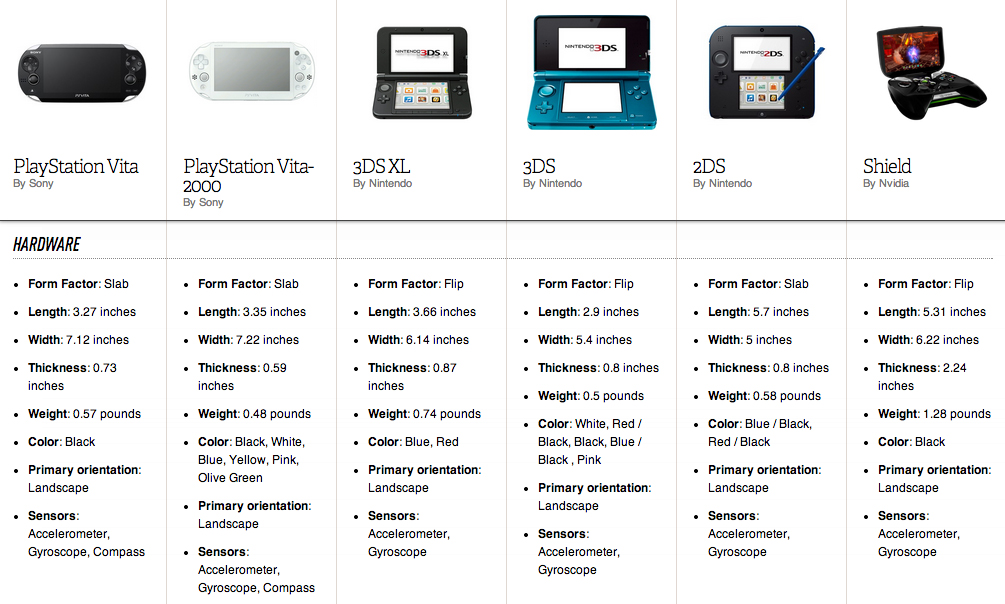 Click the image above for full specs on all six handhelds.

The new Vita is an improvement in many ways, but not all

The new Vita is 20 percent slimmer and 15 percent lighter than the original model. It has a few cosmetic design tweaks and a thinner profile that's supposed to make it a bit more ergonomic, but it's largely the same design as it's always been. There's one really key difference between the two though, and it may partly speak to why Sony's been able to drop the price: the original Vita used an OLED display, while the new Vita uses an LCD display. Sony says the difference is negligible, but it's worth remembering that the change is for most a downgrade, however slight, from the vibrant colors that the original model's OLED display could produce.

Even so, the Vita is still unquestionably more powerful and capable than Nintendo's line of 3DS handhelds, which includes a standard and XL model alongside a less expensive model that doesn't do 3D. Though neither Nintendo nor Sony fully disclose what's on the inside of their handhelds, it's fairly obvious when looking at their games that the Vita is capable of producing graphics closer to the level of a last generation consoles than the 3DS is able to. When looking at what specs we know about, that makes sense: Sony says that the Vita has a quad-core processor, while Nintendo is believed to be using a single- or dual-core processor running even slower. Full details of their RAM and graphical capabilities aren't stated by either company as well, but here it's also believed that Sony takes a significant lead.

Sony's handheld has the better display to run it all on too, be it OLED or LCD. The Vita's display is 5-inches diagonally with a resolution of 960 by 544 pixels — a density of about 220 pixels per inch — while the primary 3DS models have lower resolution displays of 800 by 240 pixels on top and 320 by 240 pixels on the bottom. That top resolution's longer side is effectively cut in half too, since the pixels are split in two to create its flagship 3D effect. It makes the 3DS line's pixel density look exceptionally low in today's world of 1080p smartphones, with about 95 pixels per inch on the 4.9-inch 3DS XL to about 132 pixels per inch on the 4.3-inch 3DS and 2DS.

Despite its larger display, neither Vita is dramatically larger than any 3DS. The new Vita is still longer, measuring over 7-inches wide, but it's slightly thinner and even a bit lighter than the 3DS models too. The Vita is also better set up for serious gaming, including dual control sticks rather than the single one found on the 3DS line. Both handhelds have their gimmicks too, and you'll have to decide which sounds more meaningful: the 3DS lines' dual screens and 3D picture, or the Vita's rear touch panel.

Nintendo and Sony aren't the only players in portable gaming

Those aren't the only handheld consoles in town any longer though. Last year, Nvidia released the Shield, a far more capable handheld that's effectively a gaming controller with a 720p display strapped to it. It can push games over HDMI, stream games from local PCs, and has access to everything on Android. It can deliver an impressive portable gaming experience, but it's in some ways limited by its use of Android too: since most games aren't designed for use with a controller, the Shield's familiar body can at times feel underutilized.

Of course, that's the sticking point for all of these handhelds, and why specs alone have never been the most important point in any console race yet. What matters most is what games are on each platform, and there's a dramatic difference between what's available on each of them. The 3DS line has the smart and classic games that you'd expect from Nintendo. The Vitas can get closer to delivering a console experience and have a strong mix of smaller titles. And the Shield can access everything from Angry Birds to ports of Grand Theft Auto.

The Shield's complexity and power suggest that it's meant more for people who want very serious gaming on the go and anywhere around the house, but with it currently at the same price as the new Vita, it's a worthwhile option for anyone to consider. For most though, the decision will come down to the classic contenders: the new Vita and any one in Nintendo's 3DS line, which current range in price from $199.99 to $129.99. The Vita's hardware is the winner in most ways, but in the end, it's your specific taste in games that'll make or break either choice. There are a lot of compelling titles on both sides too, so that final decision may not be an easy one.

If you want to learn more about any of the products mentioned above, all of our information on them can be found through the database box located beneath the article. For more on game consoles and just about every product around, you can check out the full Verge Database right here.

Correction: the current price of the Shield is $199.99. This article originally stated that it was $299.99, its initial selling price.