Glenn Greenwald and Laura Poitras return to US, blame government for climate of fear

Share All sharing options for: Glenn Greenwald and Laura Poitras return to US, blame government for climate of fear

At the presentation ceremony for Long Island University's prestigious George Polk Awards in journalism, reporters were recognized for some of the biggest stories of the past year: the NFL’s indifference to concussions, the deliberate attempts by New Jersey governor Chris Christie’s office to create traffic jams, former Virginia governor Robert McConnell’s acceptance of illegal gifts. But one of the most dramatic moments was a series of text messages signaling the arrival of two journalists who helped reveal the large and hidden web of NSA surveillance: documentarian Laura Poitras and reporter Glenn Greenwald.

The presentation of the Polk Award for national security reporting, which Poitras and Greenwald accepted alongside The Guardian’s Ewen MacAskill and The Washington Post’s Barton Gellman, marked the pair’s first visit to the United States since the initial leaks from Edward Snowden were published nearly a year ago. Immediately after the leaks, Rep. Peter King (R-NY) called for Greenwald’s arrest and prosecution, and Director of National Intelligence James Clapper obliquely referred to journalists who helped Snowden as "accomplices" during a Senate hearing in January. But the mood has calmed, and Greenwald now views the practical risk of returning as low, he told reporters in a press conference after the awards luncheon. Despite this, he says officials "deliberately created an environment where they wanted us to think there was a risk," refusing to tell Greenwald’s lawyers whether he might be indicted.

Arrival in nyc of @ggreenwald. No arrest made. #nytimes. pic.twitter.com/mQPXuLWDf7

This climate of fear was pronounced enough that the WikiLeaks Twitter account posted and retweeted status updates for Greenwald and Poitras as they landed at JFK Airport in the company of an ACLU lawyer, confirming that they had not been arrested on arrival. Now that they’re apparently in the clear, "I do think this sort of presages more visits to the US," says Greenwald. His book about Edward Snowden and NSA surveillance, No Place to Hide, will be released in May, and he hopes to return for a book tour. Poitras, for her part, will return to Germany once she finishes editing her documentary film about NSA surveillance. "I don’t feel confident I can protect source material in the United States right now," she says.

"I don’t feel confident I can protect source material in the United States."

Newspapers that have worked with Snowden documents have come under heavy governmental pressure, particularly in the UK. During his speech, Greenwald profusely thanked the staff of The Guardian, which was forced by the GCHQ to smash its hard drives in an attempt to destroy classified files. In other ways, however, Poitras says the release has created a more open climate for whistleblowers and critics of surveillance. On previous visits, she says, she was stopped frequently by customs, and she speculated that this time was different because of increased public scrutiny.

Since leaving The Guardian to found The Intercept with Poitras and Jeremy Scahill, Greenwald has continued to publish leaked documents, though none have reached the explosive heights of his first reports. He’s vague about how much of Snowden’s material remains untapped, but he says the time he’ll keep writing about it is "relatively short," though the larger project will probably continue for much longer. "It’s an extraordinarily deep and profound set of materials that he furnished, and I think that it’s critical that the newsworthy items get published within the journalistic formula that we’ve been using, even if we’re not the ones who do it." 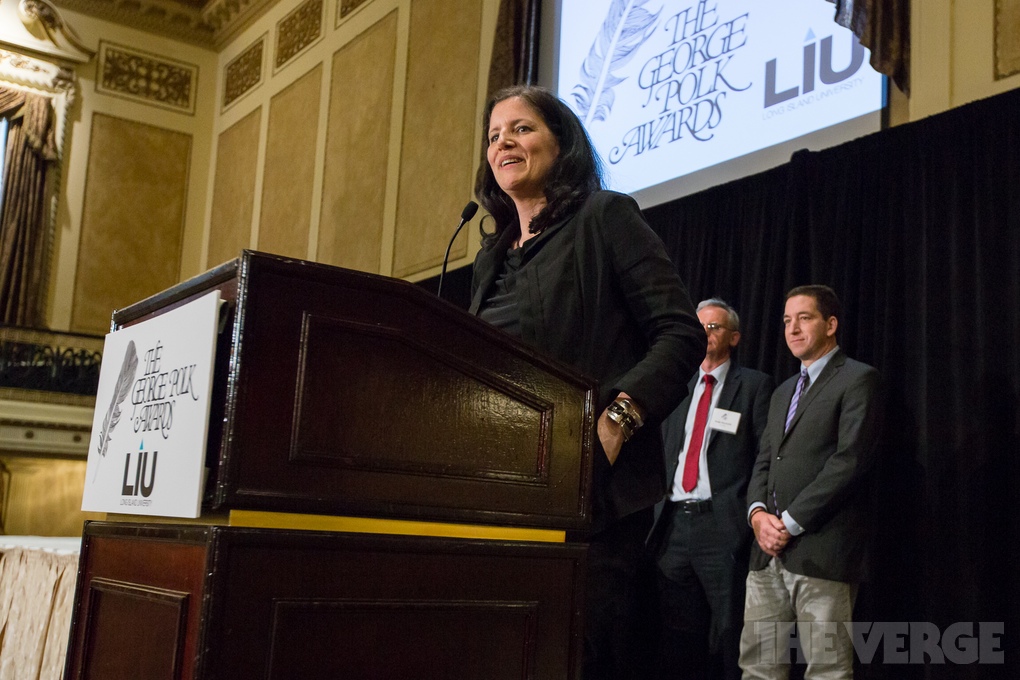 While he raises the possibility that later releases won’t attract much public attention, he maintains that the best is yet to come. "In my opinion, the stories that are the most significant and that are the most shocking and that will have the broadest and most enduring implications, are the ones that we’re currently working on and have not yet been reported," he says. Days before the Polk Award ceremony, a massive security hole known as Heartbleed was discovered in OpenSSL, and the NSA has denied allegations that it secretly exploited the flaw to gather information. Poitras and Greenwald say they have not checked the documents for any mention of Heartbleed, but these accusations are exactly the sort of thing that that Snowden’s leaks could clarify.

As the Obama administration plans to phase out its phone-records database, Greenwald is skeptical. "I would like to see the debate be about not whether the US should be collecting metadata under a specific provision of the Patriot Act, Section 215, but the broader question of whether we want to empower the government to monitor and surveil people who are suspected of absolutely no wrongdoing," he says. And he’s unsurprised that Obama opted to renew the program in its current form while waiting for changes. "President Obama likes to parade around as some sort of King Solomon figure in between the excesses of the NSA and those who are raising concerns about it," he says. "The reality is that he presided over this out-of-control system for five years … I think he is one of the obstacles to reform, not a vehicle for it."

Heartbleed: the bug that put the internet on high alert