One foot in the future, one firmly in the present

There’s a woman inside my Lumia 1020 who greets me every time I hit the search button. Her name is Cortana, and she’s very friendly. She keeps my schedule in order, she knows how long it’s going to take me to get to the airport, and she knows that thanks to traffic I’m almost definitely going to miss my flight so really why am I even trying? It’s okay, she’ll help me book another flight tomorrow. Oh, and she has a great idea for where I should go to dinner tonight.

She’s the centerpiece of Windows Phone 8.1, one of the biggest changes Microsoft has ever made to its mobile operating system. She’s also part of Microsoft’s vision for how we’ll interact with our phones in the future — we won’t open a dozen apps to do a dozen things, we’ll just ask our virtual assistants. Who may or may not be named after Halo holograms from 500 years in the future.

On one hand, Windows Phone 8.1 is a push toward the future, full of new things and new ways to do old things. But it’s also simply Microsoft’s biggest effort yet to bring its mobile platform closer in line with iOS and Android, to make it seem less alien to those who might switch. Its changes are designed to make Windows Phone 8.1 feel more singular, more unified, and more powerful. To do everything your phone can already do, and to add Microsoft’s unique powers on top. It’s a difficult balance to strike, but it’s Microsoft’s best chance in the ultra-competitive mobile market it was late joining in the first place.

Cortana, I have a question: are you up for this? 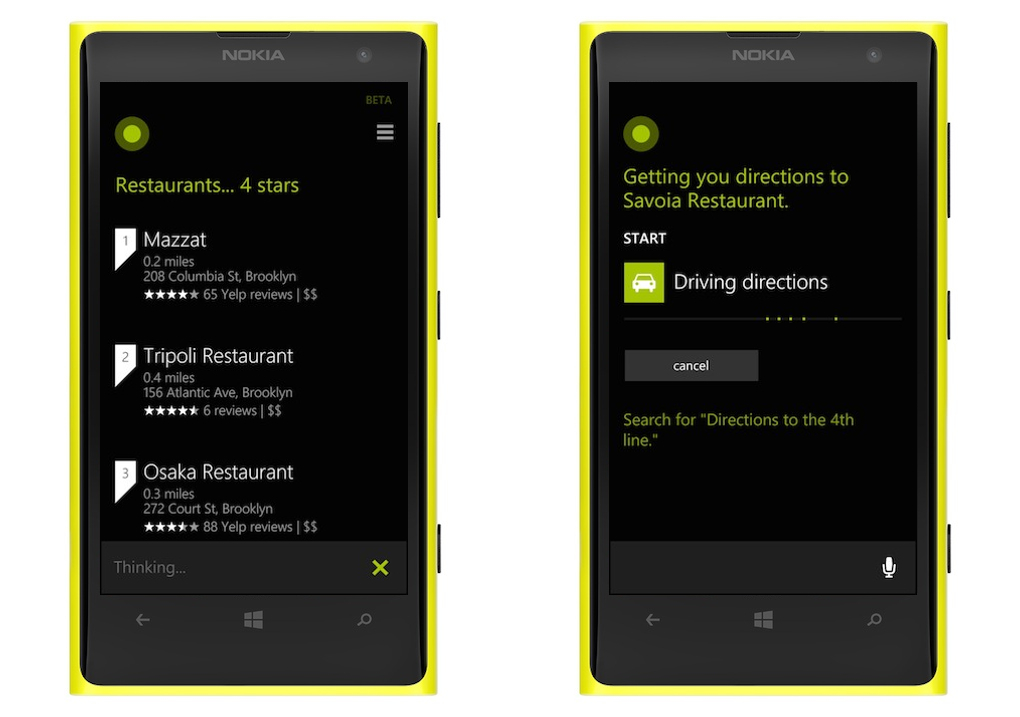 There are improvements in Windows Phone 8.1 to Xbox Music and Wallet and Maps, plus better support for dual SIM cards, app updates, and calendar views, but those are tweaks and bugfixes. This is really a story about Cortana, about an entirely different way of interacting with your phone. It’s one part personal assistant, one part shortcut machine, and one part personal newspaper. With a voice shockingly similar to Siri’s, Cortana can do everything from set your alarm to help you find a good restaurant nearby and make sure you get a table. She can also launch apps, search the web, and tell you whether or not the Yankees won last night. 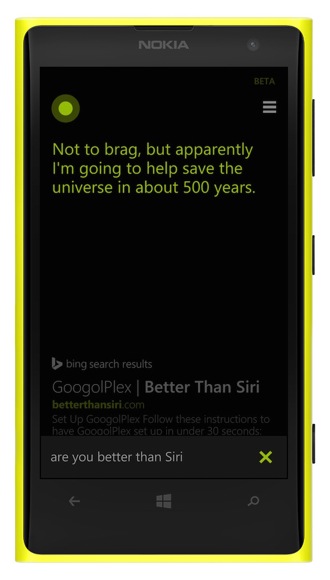 Cortana is now the key to using Windows Phone

It’s all powered by Bing, and it’s incredibly useful. A tap on the search button activates Cortana from anywhere, and it’s the fastest way to do almost anything. Multitasking is a weak point of Windows Phone, but Cortana almost obviates the problem — I don’t have to switch out of Rdio to add a reminder, I can just tap the magnifying glass and say "remind me to pick up my dry cleaning when I get home tomorrow." Cortana has learned where I live and work, and knows what I like to read and listen to; she can be full of useful information and recommendations. It’s all customizable, too, through a clever Notebook feature: I choose what Cortana knows about me, my habits, my interests, and my contacts, and she acts accordingly.

It’s not yet really meaningfully better than what Google Now offers, other than giving me the ability to launch an app or to say "find me a coffee shop" and then "direct me to the third one." But it’s a nice realization of what Windows Phone was always supposed to be: get in, get out, and get back to life. And it’s made me more certain than ever that we’re all going to end up talking at our phones all day whether we like it or not.

Windows Phone’s newfound attentiveness goes beyond Cortana, too. There’s a new WiFi Sense app, which is always looking for and automatically joining open Wi-Fi networks at places like Starbucks — it logs in, accepts terms and conditions, and does it all without your involvement. There’s also Data Sense, which tells you how much data you’re using and lets you set a limit, and Storage Sense, which makes it easy to free up space or delete unnecessary files. But Battery Saver is my favorite: it’s the "which app is killing my battery" app I’ve been wanting on my iPhone since the day I bought it. The three together help you save your battery, your data, and your money, and mostly do it for you. And the more my phone can do for me, the happier I am.

Microsoft’s success with Windows Phone 8.1 will hinge on its ability to make customers switch from their iPhones or Android devices, and it’s taken a number of steps to make that as easy as possible. The Action Center is the biggest one — it’s hard to believe it took so long to add in a shade that you can pull down to see your notifications, toggle key settings, and quickly access the things you need most. (You also, mercifully, no longer have to swipe down to see your network and battery status.) 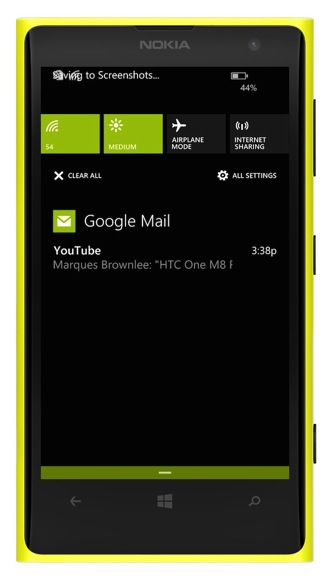 It’s really basic, and a little unintuitive in places; if you tap on a notification for an email, and then delete the email, you go back to where you were rather than to your inbox. You can’t interact with the notifications other than to open them, and the "Quick Actions" are only for toggling a customizable group of settings including Wi-Fi, Bluetooth, and the like. Yet even such a simple implementation makes a huge difference.

I don’t have to hunt for the Settings app to change screen brightness, and if I miss a notification when it pops up it’s not just gone forever. The Live Tiles counters reset when you open up the Action Center, too, meaning you’ll never have annoying repeats. It makes the whole OS feel faster and more cohesive, like a single thing rather than a collection of apps that just all run near each other.

For the first time, Windows Phone 8.1 feels obvious. That is of course largely because it now works much the same as Android and iOS, but I could now hand my Lumia 1020 to my iPhone-wielding mother and she’d quickly understand how to use it. And anything she can’t figure out? She’ll just long-press on the search button and Cortana will appear, listening, ready to help.

Across its many divisions and products, Microsoft seems to be learning the same lesson all at once: that invention and revolution don’t come from broad, sweeping overhauls, but rather a series of small nudges in the right direction. Do what you do well, and learn from what others have done well. (Great artists steal, after all.) Windows Phone 8.1 is successful because it doesn’t rethink everything about everything; it lets good ideas be good ideas, like voice control and a notifications pull-down, and focuses its innovation on what makes Windows Phone unique. 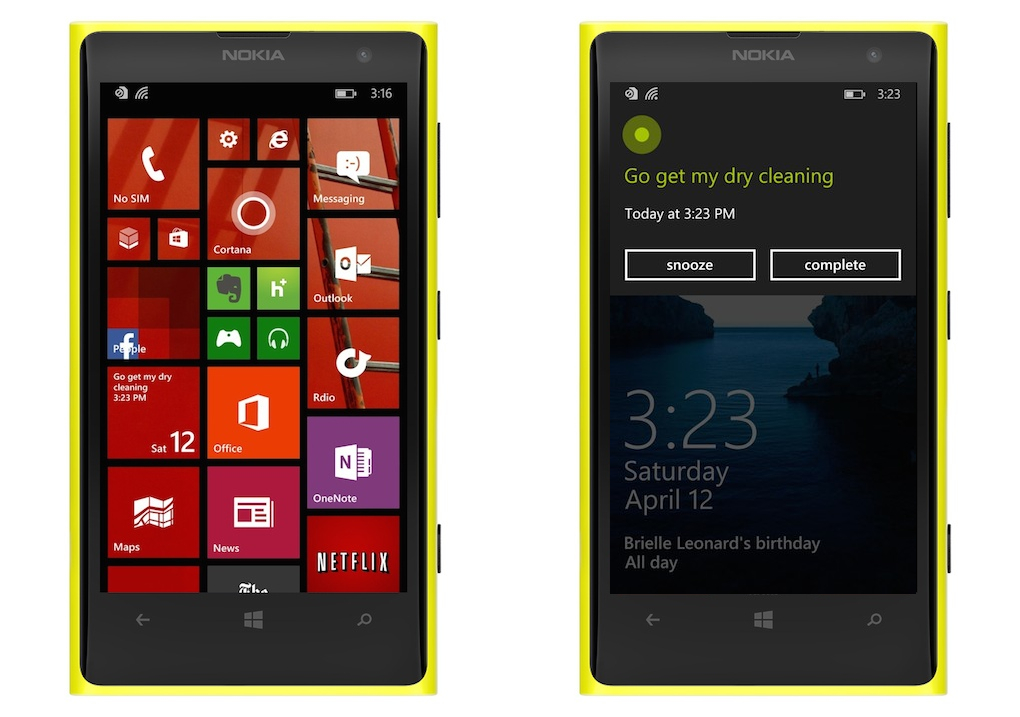 Like the tiled Start screen, which is in my opinion the best home-screen setup of any mobile OS, Windows Phone 8.1 now lets you put more tiles on the screen at once, and lets you add a background picture that gives your phone a little depth and a lot of personality. I still loathe the single-file list of apps a screen to the right, but with 10 minutes of customization I can place just about everything I need on the beautiful, information-rich Start screen that is far more useful than a screen full of icons. You can even pin websites from the much-improved Internet Explorer 11, many of which rotate headlines in their Live Tile, and even use Cortana to launch them. (Cortana saying "Here’s The Verge" is my favorite thing about Windows Phone 8.1.)

Rather than reinvent the wheel, Microsoft's just building better tires

Throughout the OS, Microsoft finds clever ways to add its own unique something on top of existing features. Its new Word Flow keyboard, on which you can either tap each letter or swipe between them to type, is fantastic — Windows Phone 8’s keyboard was already amazing, and made better by borrowing from Swype and SwiftKey.

There’s a neat way to turn a phone call into a Skype video call (as long as you both have the right phone and the right connectivity), plus a tool to share your phone’s screen using Miracast. None of the features are mission-critical, and none fundamentally change the way you use your phone like Cortana does, but they sell Microsoft's services and ecosystem well. And when universal Windows apps start to become the norm, there might be a much more powerful case for why you’d buy a Windows Phone and surround it with other Windows products.

Microsoft raised its game, but not above its competitors

Microsoft’s real challenge isn't building a good mobile operating system, it's getting people to use it now. That's always been the real challenge. If you buy into all things Windows there’s a fully developed ecosystem waiting for you, but Microsoft was too late to the game. Now that it has something worth switching to, Microsoft has to actually get people to switch. Windows Phone 8.1 goes a long way toward making switching easier, and there are a number of genuinely great, unique things about it — I really love the Start screen — but most people are so entrenched in Android or iOS that Microsoft has to make a stronger case. Business-friendly features like VPN and enhanced security are clearly part of Microsoft’s plan, but Microsoft is still without a truly killer, can’t-live-without-it app. iOS and Android may not have one either, but they have market share on their side; Microsoft needs to swing bigger.

Windows Phone 8.1 is a good operating system. It can’t hide the still-lacking Windows Phone Store, which simply still doesn’t have the quantity or quality or timeliness of apps that Android and iOS do, but it goes a long way toward making Windows Phone feel competitive. It feels finished now, really for the first time. It gives Microsoft its best chance yet to attract the billions of people who haven't yet bought a smartphone. But Microsoft hasn’t changed the game here, only proven it can play; Windows Phone 8.1 will make a lot of Windows Phone 8 users very happy but won’t make anyone at Google or Apple sweat.

A personal assistant from 500 years in the future is a good start, but it’s only a start.