Dreaming of the perfect wearable

I’m in the final stretch. My legs are aching; I’m drenched in sweat. The finish line is near, I can feel it. My wrist buzzes. An email: Amazon finally shipped my order of Rice Krispies Treats cereal. I keep running. My wrist buzzes again. A calendar reminder, editorial meeting in one hour. I ignore it and keep going, pounding the treadmill below me with each step. Finally, my wrist buzzes again. This is the one I’ve been looking for — I’ve hit my goal of 20,000 steps for the day and the Samsung Gear Fit I’m wearing is proudly displaying a gold medal for doing so. I smack my hand on the kill switch and the treadmill slows to a stop.

This is the dream, a wearable device that tracks my fitness activity while providing smartwatch functionality. And it’s exactly what Samsung is pitching with its new $199 Gear Fit. The Fit combines the best of fitness tracking — step counting, heart rate monitoring, and real-time coaching — with smartwatch sensibilities. It’s an obvious idea, and others have tried this to a limited extent before, most notably Fitbit with its ill-fated Force, but nobody has done it well. Samsung promises that it has finally cracked it.

It’s just too bad that dreams don’t always line up with reality.

The Gear Fit is Samsung’s first fitness-focused wearable device, but it borrows a lot from the company’s line of Gear smartwatches. It’s a striking piece of hardware and definitely far better-looking than its smartwatch siblings. The Fit is all plastic and rubber, a basic band with a rectangular display that’s much larger than the screens on other fitness trackers. It’s well-designed and slim enough that it doesn’t stick out on my wrist like an eyesore. It also doesn’t look like a computer or science-fiction novelty, like many other smartwatches. 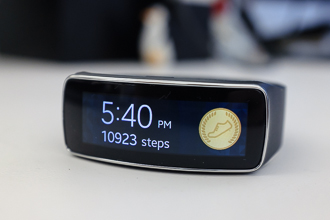 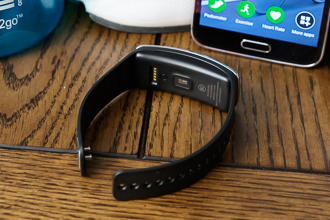 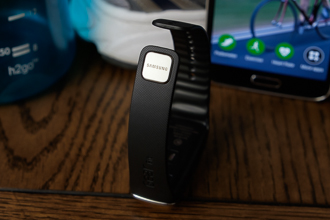 The star of the show is the Fit’s curved 1.84-inch color touchscreen display, which is surrounded by chrome trim that manages to add a little bit of style without looking cheap or tacky. It’s gorgeous to look at: vibrant, colorful, and with exceptional viewing angles. It’s also easy to read outdoors— critical for a fitness device. Samsung and others have tried curved displays in smartphones before, but the Fit is the first device where it actually fits in with what the product is supposed to do, and how you’re supposed to wear it.

The Fit's curved display is bright, vibrant, and great to look at

The Fit straps on to my wrist with a textured rubber strap that’s pliable and comfortable even when wet. My review unit is black, but the strap is interchangeable and Samsung is selling a variety of colors to suit your preference (they are proprietary bands, so don’t expect to get a replacement at your local mall watch kiosk). The clasp on the strap is simple and easy to use — I didn’t have any trouble closing it with one hand, unlike Fitbit’s Force or Flex, which are a chore to put on.

Underneath the Fit is a sensor to measure your heart rate and contacts for the USB charging adapter. The adapter is small and fiddly and will surely get lost at some point (I managed to leave it in the office over the weekend, and by Sunday evening, I had a dead Fit with no way to recharge it). I really wish Samsung would have just put a USB port on the Fit itself and covered it up with a flap door instead of requiring another piece of equipment.

The Fit’s battery lasted about two to three days between charges during my tests, which is better than Samsung’s earlier smartwatches, but not as good as other fitness trackers or smartwatches on the market. It also takes a lot longer to charge the Fit’s battery than I expected, and dealing with its annoying charging adapter every few days is a pain.

The only physical button on the Fit — which wakes the screen and takes you to the main view — is along its side and it’s small, but easy to press. A double-press can be configured to take you to notifications, pedometer, settings, or other areas of the Fit’s interface. Every other interaction is done through the touchscreen. There isn’t much else to say about the Fit’s hardware — it’s well designed and may be the best-looking piece of equipment Samsung has produced in years (or ever).

Unfortunately for the Gear Fit, those good looks are only skin deep. 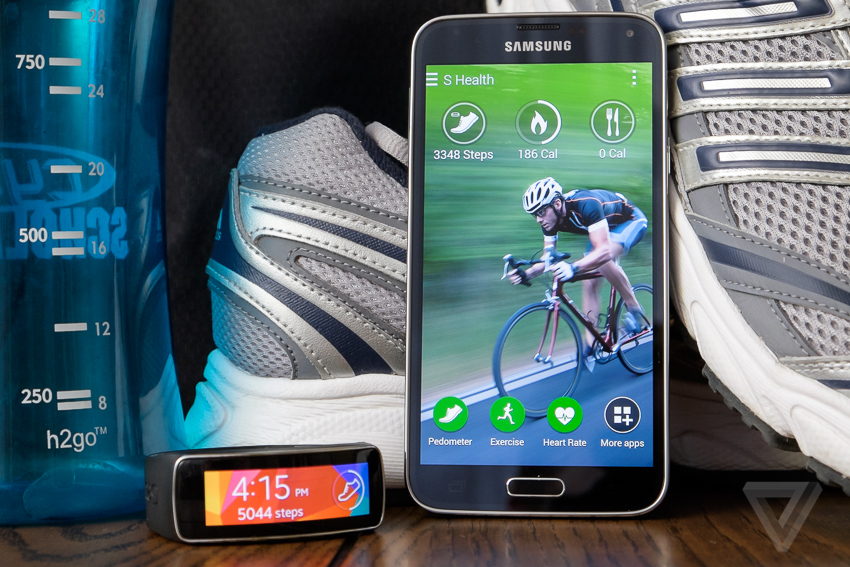 The main problem with the Gear Fit is that it’s just not very good at either purpose it aspires to serve, doing a poor job of tracking my fitness activity or giving me smartwatch functionality.

By default, the Fit’s display is laid out horizontally, which is difficult to read when you’re actually wearing the thing. It orients text in a way that makes the most of the screen’s real estate, but that makes it hard to read when you hold your arm in a comfortable position. There’s a switch to rotate the display to vertically oriented, which is how I used the Fit most of the time, but then text gets cut off or wrapped awkwardly. Neither option is really practical, though I’m not sure how Samsung could fix it given the Fit’s odd screen dimensions. The Fit’s touch response isn’t as good as a modern smartphone, either, and I had to frequently tap multiple times to get it to recognize my touch.

For fitness tracking, the Fit does everything that I expect from a modern wearable. It can count my steps, monitor my sleep activity, and even tell me my heart rate at any given moment. It’s also water-resistant enough that I had no problems wearing it in the shower or while breaking a decent sweat.

It only works with Samsung smartphones, pairing with a Gear Manager app and Samsung’s S Health to organize your fitness data. S Health offers basic goal setting and achievements and has features for tracking how much food you eat. But it isn’t as nice looking or comprehensive as the apps from Fitbit, Jawbone, or others, and doesn’t do a great job of tying all of this data together into something I can actually use. It’s also missing my sleep data entirely — there’s just nowhere in the app for me to view it. S Health has been around for about a year now (it debuted with the Galaxy S4 last year), but it still feels like a first-generation app. 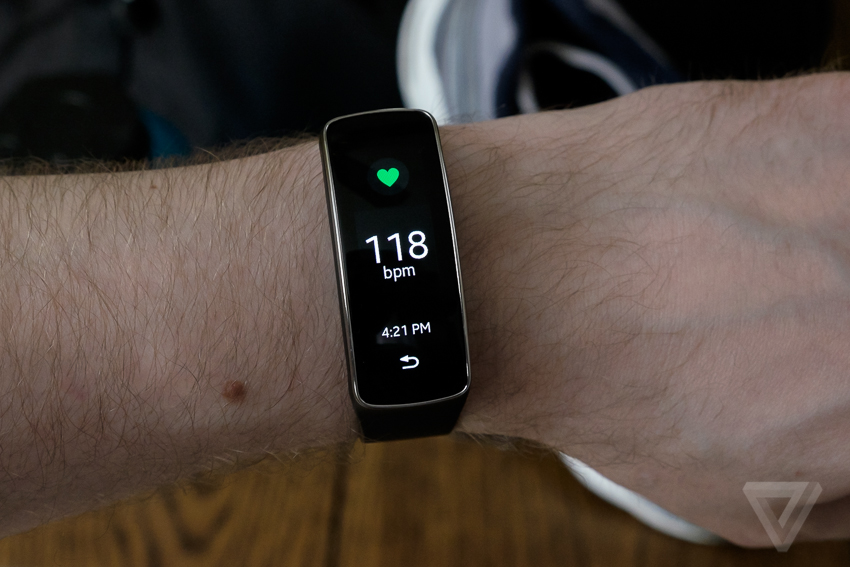 In general, tracking your activity with the Fit is more work than it should be. Unlike the Fitbit trackers or Basis band, the Fit requires you to tell it to count your steps before it will do so. If you forget to start the pedometer at the beginning of your day, it won’t record your activity. Likewise, the sleep-tracking function requires me to tell it when I’m going to bed and then again when I’ve woken up. The Basis band does this automatically and even the Fitbit Force lets me count sleep cycles after the fact if I forget to start the tracking at night. 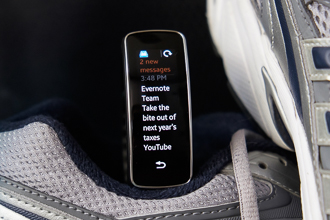 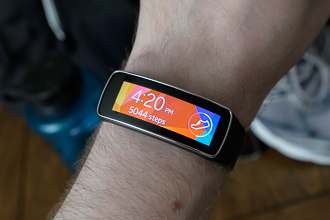 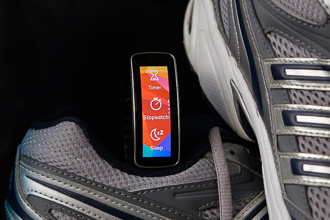 Even once you’ve told the Fit what to do, it doesn’t do its job particularly well. The step counter proved to be wildly inaccurate during the days I wore the Fit on my wrist, counting far higher numbers of steps than my activity warranted. For example, my morning routine of waking up, showering, getting dressed, and making coffee routinely totaled 1,400 to 1,500 steps on the Fit, when other trackers would count less than half that. It appears that the Fit is counting a lot of my other motions as steps when it shouldn’t be.

Similarly, the heart-rate monitor takes a long time to get a reading and requires me to be perfectly still while doing so. It too has inaccuracies, frequently giving me readings that don’t line up with my level of activity (or lack thereof).

As a smartwatch, the Fit offers basic notifications (including those sent by third-party apps), the ability to reject a call, and a tool to sound the alarm on your phone if you’ve lost it in the couch cushions. It doesn’t have the ability to take phone calls, run apps, or take pictures like Samsung’s other smartwatches, but that’s probably for the better. There are a few watchfaces available to display things such as the current weather, your upcoming appointments, a world clock, or your current step count.

Unfortunately, there isn’t much you can do with the notifications on the Fit other than just clear them from the phone. I can’t delete or archive emails, or even mark them as read from my wrist. The Fit’s awkward screen dimensions cut off messages if they are longer than a few lines of text, and reading anything on it requires almost constant scrolling. There are message templates for quick replies to text messages, and I did like the ability to reject incoming calls right from my wrist. But aside from that there’s a lot more I want from my smartwatch, such as the ability to choose which specific messages light up my wrist and do a quick triaging of my inbox.

The Fit also makes a poor replacement for a standard wrist watch, since its screen isn’t constantly displaying the time. Waking up the display requires a push on the side button or for me to lift my wrist up in a deliberate "I’m about to check the time" motion. The motion sensing is miles better than it was on the original Gear, but there’s still a beat or two before the Fit will recognize that I’m interested in the time. It’s also not as consistent as it needs to be to really replace a wrist watch. 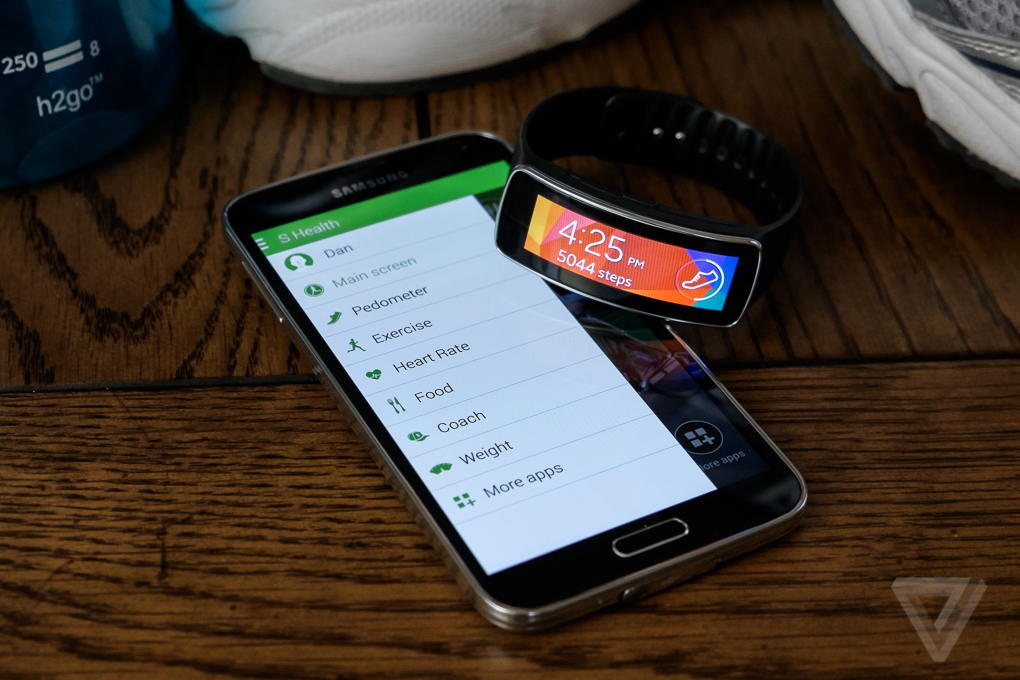 It’s a shame that the Fit isn’t a better fitness tracker or smartwatch, because it’s so nice looking and the display is so striking that I could actually see myself and many others wearing it all of the time. It’s also the logical thing to do: I want my smartwatch to track my fitness activity and vice versa. But at $199, it’s more expensive than better smartwatches (the Pebble) and better fitness trackers (the Fitbit Flex or Jawbone Up24) and it only works with Samsung’s smartphones. Even at a lower price, it’d be hard to recommend when it doesn’t do either fitness tracking or smartwatch activities very well.

There is going to be a flood of smartwatches and other wearables on the market this year. Google’s upcoming Android Wear platform promises to offer the best smartwatches we’ve seen yet, and the ever-looming specter of an Apple smartwatch seems to get more and more real with each rumor. And there already are a bunch of fitness trackers available, and we’ll likely see smarter ones come along in the near future.

The idea of the perfect fitness tracker and smartwatch combination is a great dream to have, but in the case of the Gear Fit, it’s still but a dream.