Netflix customers on Comcast are already seeing the benefits of a controversial pact between the streaming service and cable provider. Comcast jumped five spots in Netflix's ranking of ISP performance for the month of March. It now sits in fifth place, delivering an average streaming speed of 2.5Mbps — up from the pitiful 1.15Mbps average Comcast delivered to Netflix subscribers in January.

"This month’s rankings are a great illustration of how performance can improve when ISPs work to connect directly to Netflix," said Netflix. It's also a great illustration of what happens when Netflix pays off cable providers to speed things up: Comcast now charts above Verizon FiOS and even Time Warner Cable, the very company it's hoping to snatch up in the coming months. 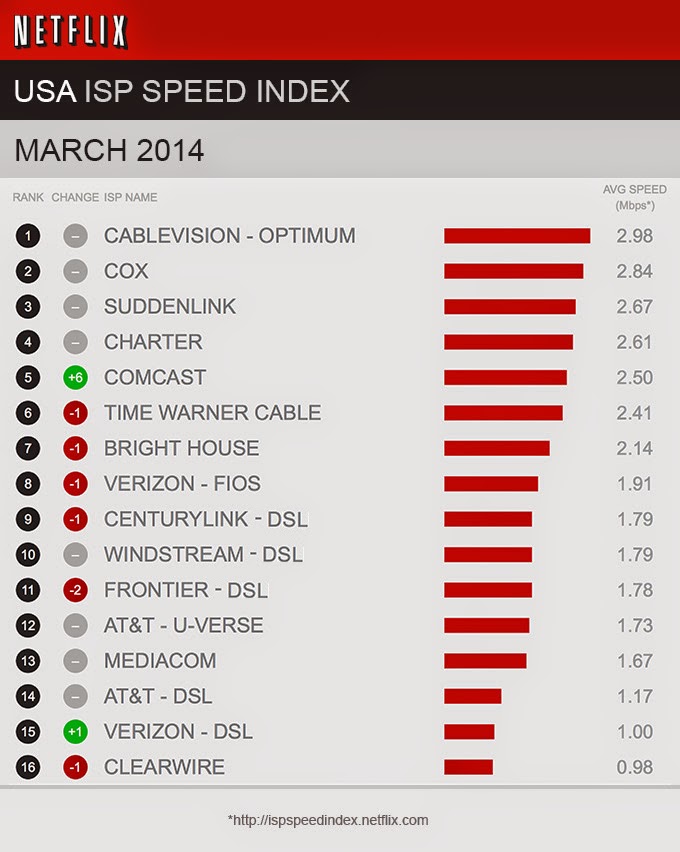 "We are dedicated to delivering a great streaming experience and invest in continually improving that experience," Netflix said, largely ignoring the controversy and complaints that surrounded the Comcast deal. That agreement may set a painful precedent, but the company seems unfazed. "Part of that investment is working with ISPs to make Netflix delivery easy and to avoid congestion." Netflix is still pushing its Open Connect initiative as the best way to ensure a smooth streaming experience, and Reed Hastings has made clear that he doesn't want to go down the same, expensive road with other ISPs. But it appears his gamble with Comcast is already proving worthwhile for customers.

Update: Netflix reached out to tell us that its original blog post was incorrect. The 1.15Mbps figure was Comcast's average in January, not February. We've corrected the article to reflect this.

More from this stream Netflix takes on internet providers: the fight for the future of online media