Amazon is finally giving its Cloud Drive Photos app on iOS the overhaul it so desperately needs. Before today, the app automatically uploaded photos and videos from your camera roll and put them in one massive folder. There was no efficient way to navigate through them; everything was ordered chronologically, but photos weren't split up in any helpful way. Finding the shot you were looking for required scrolling through a massive list. (You're able to create custom albums within Cloud Drive, but I never bothered.) And if you use Cloud Drive on more than one device, the number of folders increases further — adding even more needless complexity to the whole setup. Finally Amazon is making things simpler.

Version 3.0 of Cloud Drive Photos features a new "timeline" that lets you quickly move through your photo collection to reach a certain month or year. It's not quite as visually striking as Dropbox's Carousel, but it gets you to whatever date you're looking for and does it fast. That makes finding a particular photo much easier than before. You can quickly see all the videos you've uploaded, too, thanks to a standalone "videos" section. 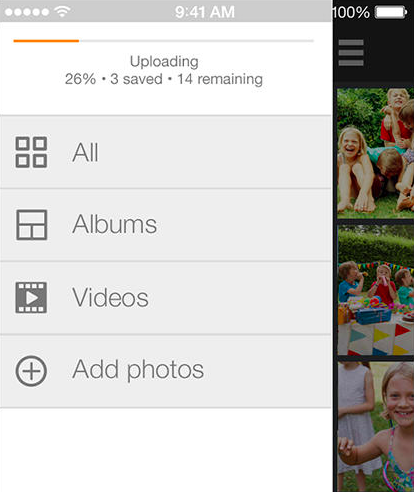 With today's update, Amazon is promising a simpler navigation layout that will "quickly get to your most frequently used features." As part of that redesign, Cloud Drive Photos now includes a progress bar that clearly indicates when (and what) content is being backed up to the cloud. Cloud Drive Photos for Android received some of these features in March, but it's still missing the new timeline. Presumably that will arrive soon.

There are few safer places to store your photos online than with Amazon. But Cloud Drive Photos is worth keeping an eye on for another reason; the app is a great example of the slow but substantial progress Amazon has made in developing its own software. Rumors indicate that the company will announce its own smartphone in the coming months. If that's true, photo management and worry-free backup will need to be a core part of Amazon's product on day one — just as they are on Android, iOS, and Windows Phone. This latest Cloud Drive Photos update suggests that the company is starting to take that challenge seriously.