Xbox One update rolling out with Kinect improvements and friend notifications

Share All sharing options for: Xbox One update rolling out with Kinect improvements and friend notifications

Microsoft seems to be improving its Xbox One software on a monthly basis, and April is no different. Starting today, the software maker is rolling out its latest update to Xbox One consoles, bringing some new features and improvements along the way. Xbox 360 owners will be familiar with friend notifications when players arrive online, but the Xbox One strangely lacked this feature at launch. Today’s update brings the friends notifications back, along with the ability to identify friends who are playing multiplayer games.

Microsoft has also turned its attention to improving Kinect voice and motion detection with April's update. Microsoft doesn’t detail the improvements fully, but the company says it has updated some gesture functionality "to reduce false positives on non-hand objects triggering gesture commands." Some Xbox One owners have complained about audio issues with Kinect not picking up commands reliably, so hopefully the voice and gesture improvements make Kinect a little more reliable. 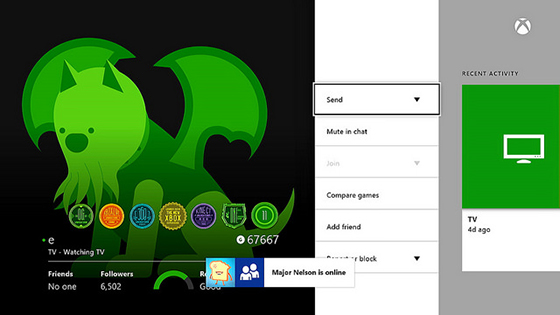 You can check for Xbox One updates manually in future

Other improvements include Blu-ray support for European markets with 50Hz video output, fixes for the Stereo Headset audio static problems, and updated UI to display when games and apps have been updated. One final change is the ability to trigger future Xbox One updates manually, allowing console owners to get the latest changes immediately. Microsoft says the latest Xbox One update is rolling out "tonight" worldwide, with regular updates still in testing by the special preview group.