In 3,000 criminal cases, the shaken baby syndrome debate goes on

On a cold Wednesday evening in January 2009, Josh Miller was finishing his 8:00-to-5:00 shift as an automotive detailer at a garage in Johnstown, Pennsylvania. It was just like any other day; he was tired and ready to go home. But that evening, his life would change forever. In just a few hours, Miller would find himself to be one of thousands of people embroiled in an ongoing national medical debate.

After work, Miller picked up his two-month-old son, Rhys (pronounced "Reese"), from the restaurant where his fiancée worked, and headed home with the boy. The two ate dinner and relaxed, sitting together on the couch. They were watching TV — Miller doesn’t remember which show — when the boy started to cry. Miller, who was 32 at the time, tried to soothe Rhys by patting the little boy’s belly and making shushing sounds. But Rhys continued to cry. And cry. And then cry some more. Soon, the cries became uncontrollable, Rhys’ voice cracking and distorting as he filled the air with as much sound as he could muster after each pained breath.

This wasn’t exactly a new thing for Rhys. Miller and his fiancée had other children, and they knew Rhys was colicky. So, as Miller tells it, he did what he’d done in the past with Rhys: he drew a bath. But as Miller filled the tub, the boy’s screams stopped. When Miller went to see why, he found that the boy hadn’t suddenly calmed himself on his own. He’d gone unconscious. And he wouldn’t wake up.

He’d gone unconscious. And he wouldn’t wake up

Next: a whirlwind, a nightmare. He called 911, frantic. He called his fiancée at work. There was a frenzied trip to the closest hospital. Relatives showing up. Panic in the emergency room. Then an ambulance ride over dangerously snow-covered roads to the closest Children’s Hospital in Pittsburgh, two hours away. Days of waiting. Doctors and doctors and more doctors poking and prodding the infant.

It looked like Rhys would pull through — he regained consciousness two days after Miller called 911 — but one of his doctors became suspicious about why Rhys had gone unconscious in the first place. Miller claims the doctor — Dr. Janet Squires, chief of the Child Advocacy Center at Children's Hospital of Pittsburgh — asked if he had a criminal record. He did — two minor drug charges and a harassment charge. After that conversation, Miller remembers telling his fiancée, "Be prepared, they're gonna point this at me."

They did. Based on a brain scan and conversations with other doctors at Children’s, Dr. Squires determined that Miller’s story was a lie: Rhys had not lost consciousness because he had been crying uncontrollably; he lost consciousness after being shaken so violently that his brain began to bleed. Miller was the only possible culprit. Within a week, he was in jail. Within 16 months, he was on trial. And by March 2011, Miller was in prison, serving a maximum of 10 years. The charges: aggravated assault, endangering the welfare of a child, recklessly endangering another person, and simple assault resulting in shaken baby syndrome (SBS).

As many as 1,400 children each year are harmed as a result of violent shaking, according to numbers compiled by the National Center on Shaken Baby Syndrome. More than 300 of those kids die. So whenever there’s seemingly clear evidence that someone like Josh Miller became frustrated and shook a child — as a stupid, last-ditch attempt to stop the child from crying — prosecutors are often inclined to file child abuse charges. And these charges have become a relative commonplace. At least nine separate pretrial shaken baby syndrome cases have made news across the country since the beginning of April.

For many years, the seemingly clear evidence in SBS cases came from brain scans.

In 1971, Dr. Norman Guthkelch published an influential paper called "Infantile Subdural Hematoma and its Relationship to Whiplash Injuries." Doctors at the UK hospital where Guthkelch worked had seen a growing number of children arrive with subdural hematomas — blood on the brain’s surface — but no visible physical injuries. The paper was written to attempt an explanation: according to Guthkelch’s theory, the babies had been shaken. As he explained to NPR in 2011, there wasn’t stigma against it at the time, "so the parents told me the truth," he told NPR. They’d say, "'Yes, I shook him.'"

Miller remembers saying, "Be prepared, they're gonna point this at me."

That theory grew far beyond Guthkelch’s grasp. In time, mainstream medicine came to understand that SBS could be identified by a triad of symptoms: subdural hematomas, bleeding behind the eyes, and a swollen brain. If a child shows up in an emergency room with those injuries, doctors are going to ask some very serious questions.

There’s no indication that Guthkelch — or doctors more broadly — intended SBS to inspire prosecutorial charges en masse against parents and caregivers who’d allegedly shaken their children into unconsciousness. But that’s what prosecutors have done. Enlisting doctors as expert witnesses, SBS criminal cases are not uncommon. Students at the Medill School of Journalism at Northwestern University found last year that there’ve been as many as 3,000 criminal cases in the United States related to shaken baby syndrome.

That’s arguably a good thing — people should indeed face the criminal justice system for shaking children. But much has evolved in the medical community since 1971 to question SBS as indicative of a crime. Which means many of those cases and criminal convictions are questionable.

A 2001 postmortem study of children allegedly killed by violent shaking, for example, pointed to alternative causes of death beyond SBS. Studies of biomechanics have suggested that it’s impossible for an adult to shake a child violently enough to cause brain bleeding. And a 2004 study showed that a child can fall, sustain fatal injuries, have a "lucid interval" where they seem fine, and then die later on from brain injuries that look like the SBS triad.

A 2012 paper published in the Houston Journal of Health Law & Policy summarizes these points and others. It concludes: "For decades, the SBS hypothesis provided a clear and simple explanation for the collapse or death of children who presented with subdural hemorrhage, retinal hemorrhage, and brain swelling," it states. "We now know, however, that its premises were wrong." 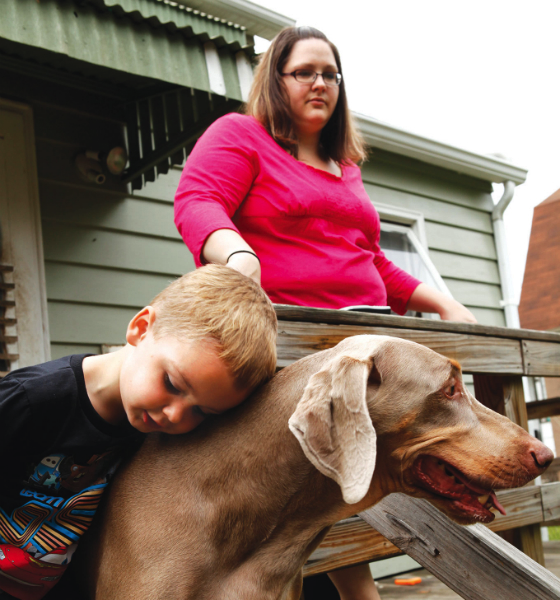 Amy McCullough stands with her son, Rhys, and their dog, Gigi. Rhys has recovered completely, according to his mother. (Heather Mull / Pittsburgh City Paper)

A major magazine piece about a Seattle-area SBS case was published this month, along with a followup to an ongoing newspaper investigation about a separate case in Rochester, NY. There's been a lot of major media attention, in fact, brought to the debate over SBS. Not the least of that attention comes from a New York Times Magazine feature and a Frontline investigation that lead to the release of a man convicted on dubious SBS charges.

But that attention has by no means inspired consensus about SBS. Questions about SBS’s validity have deeply divided segments of the medical community. That uncertainty is then dissected in criminal trials and translated to juries, who are then asked to make a decision about whether to throw someone into prison.

Josh Miller’s case was a particularly confusing example of that scenario.

In covering Miller’s direct appeal for Pittsburgh City Paper two years ago, his case struck me as unusual. For one, Amy McCullough, who’s Miller’s fiancée and Rhys’ mom, told me she doesn’t think Miller shook Rhys. (She and Miller plan to finally get married once Miller gets out of prison.) And Rhys seemed like a perfectly normal kid when I met him and McCullough: he was three years old at the time, and was talkative and boisterous. Unlike many kids who’ve suffered from SBS, Rhys didn’t have eye patches to correct his vision or tubes jutting from his body.

Plus: in a nearly identical case from the summer of 2012, Dr. Janet Squires — the expert witness who helped convict Miller — made essentially the same argument as she did in Miller’s case: She argued that a man taking care of an infant had shaken that child into a brain injury-caused coma. In that case, too, she claimed that the man had lied about not shaking the boy. In both cases, expert medical witnesses were brought to court by the defense team to refute her testimony. In Miller’s case, her testimony was strong enough to overcome the defense and convict him. But in this next case in Erie, her testimony fell on deaf ears. The accused man was acquitted.

Rhys seemed like a perfectly normal kid when I met him

Meanwhile, Miller remains in prison, and still steadfastly denies that he shook Rhys. Nonetheless, in 2012, a Pennsylvania appeals court denied his direct appeal. In January of this year, his court-appointed attorney filed a second appeal, arguing that Miller’s two previous attorneys had provided "ineffective assistance." Last week, the state responded, denying those claims. The case is now in the hands of a panel of judges who’ll decide whether Miller’s second appeal holds merit — but they’ll be considering the assistance offered by his earlier lawyers, not the science behind SBS.

Surprisingly, Dr. Norman Guthkelch, the man credited with discovering SBS in the first place, has done quite a bit to analyze potentially faulty shaking cases. And in his interview with NPR, he said there’s plenty of reason to do so. "In a case of measles, if you get the diagnosis wrong, in seven days' time it really doesn't matter because it's cleared up anyhow," he said. "If you get the diagnosis of fatal shaken baby syndrome wrong, potentially someone's life will be terminated."