Finland's postal service this week unveiled a new set of commemorative stamps featuring homoerotic artwork from Touko Laaksonen, or "Tom of Finland" — a late Finnish artist who remains an iconic figure of contemporary gay culture. His illustrations are part of a collection of 33 new designs that the postal service, Itella Posti, will release later this year.

The collection includes illustrations of autumnal gardens and Christmas scenes, but it's Laaksonen's three drawings — with their trademark musclebound men and leather — that are most eye-catching. According to Itella Posti, the stamps embody the "confident and proud homoeroticism" that lies at the heart of Laaksonen's work.

"The sheet portrays a sensual life force and being proud of oneself," Timo Berry, a graphic designer who helped select the art for the collection, said in a statement. "There is never too much of that in this northern country." 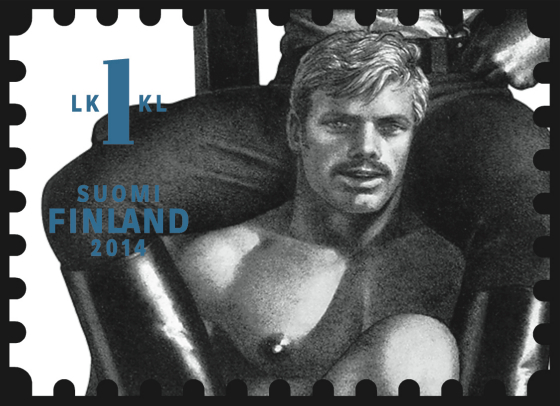 This week's announcement comes after the US Postal Service said that it will release a new stamp to honor Harvey Milk, the gay rights activist who was assassinated in San Francisco in 1978. The stamp has yet to be revealed and will be dedicated at the White House next month, making Milk the first openly gay figure to be featured on an American stamp.

The US stamp likely won't be as explicit as the designs announced in Finland this week, though Finland isn't entirely LGBT-friendly. Gay couples there have limited adoption rights, and same-sex marriage has yet to be legalized. The Finnish parliament opened debate on a bill that would allow for same-sex marriages earlier this year, after rejecting a similar proposal in 2013.