Yahoo has been under the leadership of CEO Marissa Mayer for almost two years now, but during today's earnings, all eyes were focused elsewhere. The company reported a quarterly revenue of $1.13 billion with earnings of 38 cents per share. That was slightly better than analysts predicated, but it doesn't matter much. As Cantor Fitzgerald analyst Youssef Squali says, the consensus was for Yahoo "to report another muted quarter ... in line with expectations."

What investors were really concerned about was the action happening on the other side of the world; Chinese e-commerce giant Alibaba is expected to go public in the US this year with the biggest IPO since Facebook. Yahoo, which has a 24 percent stake in the company, provides some of the only hard data available on Alibaba's private finances, a window into a fast growing titan that is expected to be worth more than $100 billion in the US markets.

Unlike Yahoo, Alibaba has been experiencing strong growth. It reported a 51 percent increase in year-over-year revenue last quarter, while Yahoo saw its revenue fall 2 percent over the same period. In comparison to Yahoo, Alibaba was quite profitable last year, reporting a net income of $800 million, a profit margin of 45 percent. According to The Motley Fool, in 2013 Yahoo's earnings from Alibaba and Yahoo Japan increased 33 percent to $897 million, which represents 65 percent of its net income for the year. 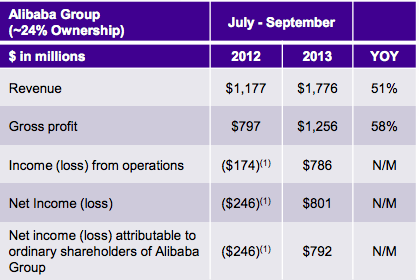 This quarter Alibaba did even better. Revenue for the period grew 66 percent year over year and net income was up 110 percent, to $ 1.63 billion. That means Alibaba's quarterly revenue for the three-month period of October through December of 2013 was bigger than any quarter Yahoo has reported in the last year. Despite its lackluster performance this quarter, Yahoo's stock was trading up more than 10 percent after hours based on Alibaba's impressive numbers. The student has officially become the master, a shift that will enrich both companies when Alibaba finally goes public sometime in the next year. 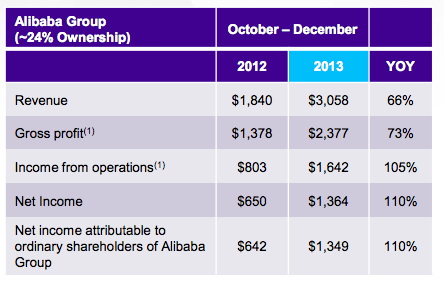