Intel is losing billions every year on tablets and smartphones

Intel is losing billions every year on tablets and smartphones

In recent months, Intel has been under pressure to explain why personal computers haven't been selling quite as well. But the chipmaker may have another pressing concern: losing billions of dollars on mobile. In 2013, Intel's mobile chip division lost a hefty $3.15 billion, after posting an operating loss of $1.78 billion in 2012. In the first quarter of 2014 alone, the Mobile and Communications Group saw a $929 million operating loss on a meager $156 million in revenue, according to new financial results issued today by the company.

While we'd previously seen Intel struggle for success with smartphones and tablets, this is the first quarter that Intel has broken out numbers for the mobile division alone, which is responsible for Wi-Fi, Bluetooth, GPS and cellular connectivity in addition to the processors that feature in such devices. The company does say that it managed to ship 5 million tablet processors in the quarter, most of them powering Android devices. 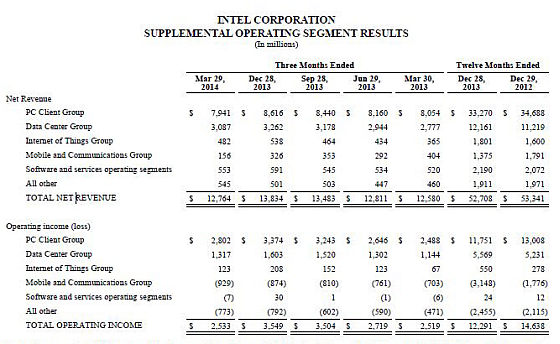 Last May, Intel announced its new Silvermont architecture, promising better mobile processors than ever before, but those processors were pushed back into 2014 and we haven't yet heard of any smartphones using the new technology. One potential hangup might have been that Intel-based smartphones require a separate chip for LTE cellular connectivity, something that's baked right into popular chips from rival Qualcomm. Intel says it expects to offer integrated LTE connectivity in late 2015 or early 2016. "We have a roadmap to profitability," says the company.

On the bright side, the company's budding Internet of Things business — also freshly revealed in this quarter's results — seems to be doing well, managing nearly a half-billion in sales each and every quarter. Overall, the company made $1.9 billion in profit on $12.8 billion of revenue in the first quarter.

More from this stream Intel inside your smartphone: Medfield and Silvermont