Researchers have an idea for how future nuclear reactors can avoid the trauma that led to the 2011 disaster at Fukushima: by building new plants five to seven miles out into the ocean. "This affords some absolutely crucial advantages," Jacopo Buongiorno, a professor of nuclear science and engineering at MIT, which led the research, explains in a video presenting the idea. In particular, Buongiorno says that this distance into the ocean will remove the risk of tsunamis, which won't throw big waves in such deep water, and of earthquakes, the seismic waves of which will be damped by the ocean.

"The ocean itself can be used as an infinite heat sink."

But the plan also offers one far more critical advantage: the ability to avoid potential meltdowns by using the ocean's water as a coolant. "The ocean itself can be used as an infinite heat sink," Buongiorno says. "The decay heat, which is generated by the nuclear fuel even after the reactor is shutdown, can be removed indefinitely." Under the team's plans, nuclear plants would be floating on platforms similar to what's used for offshore oil drilling, and they'd be designed so that they would automatically be cooled by ocean water should the plant's systems fail by keeping the reactor deep underwater. They don't say how this might impact surrounding sea life.

Underwater cables would transfer power back to shore

Those advantages would theoretically allow nuclear plants to avoid what happened at Fukushima, which was unable to cool its reactors after being struck by an earthquake and tsunami. MIT believes that the design could be expanded to any size of nuclear plant, and that it's a logical location since these plants are frequently placed beside large bodies of water anyway. These plants would be constructed at a shipyard and then towed to their location offshore. They would be moored to the seafloor, and an underwater cable would transmit electricity back to land. A living quarters for employees would even be placed on the top floor of the plant.

Though Russia is already at work building a floating nuclear plant, it's being placed right beside the shore — not miles out, which would give it the big advantages that MIT is proposing here. It's not clear how long it might take before someone puts this design to use, but MIT argues that it should even be cost effective than other designs by cutting down on elements like concrete that can lead to delays and inflated costs. The work is being presented this week at the Small Modular Reactors Symposium, hosted by the American Society of Mechanical Engineers. 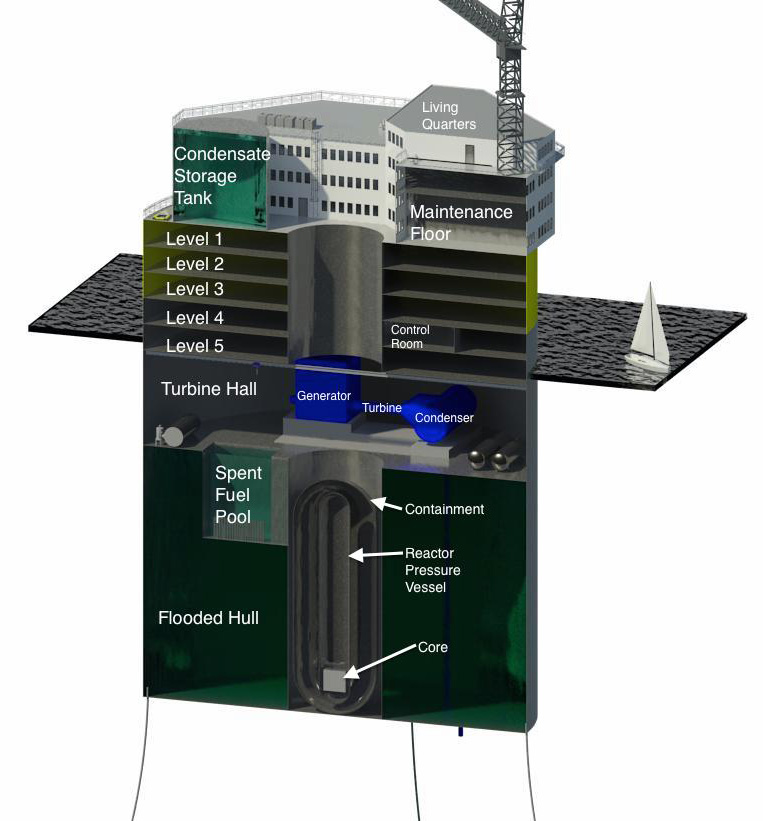 A cutaway of the proposed plant. The reactor is located under over 300 feet of water.