Scientists have discovered four species of Brazilian insects in which the females possess a penis and the males possess a vagina. This announcement, made today in the journal Current Biology, represents the first documented instance of a "female penis" in the animal kingdom.

Contrary to popular belief, the presence or absence of certain sex organs isn't the determining factor when deciding which animal of a species is female and which is male. In fact, biologists don't use sex chromosomes either. They actually rely on the size of an animal's gametes — sperm in males and oocytes in females. As the rule goes, females are the sex that contribute the largest gametes, whereas males are the sex that contribute the smallest gametes and therefore expend the least amount of energy on producing these cells. So, in this particular instance of sex-role reversal, the convention still applies: the female in these species of insect produces the largest gametes — egg cells. She simply also happens to sport a penis that she introduces into the male's vagina during copulation. 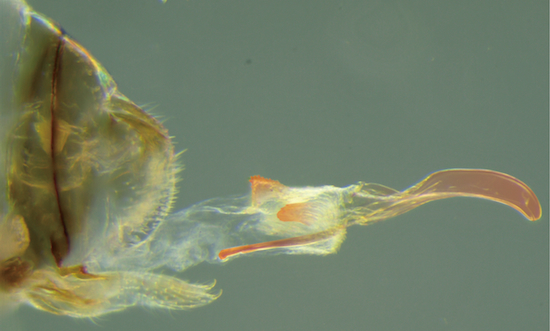 "The female penis is a completely novel structure," said Yoshizawa Kazunori, an entomologist at Japan's Hokkaido University and co-author of the study, in an email to The Verge. Except for producing the larger gametes and having an egg-laying apparatus, the females in these four species of winged insects, called Neotrogla, seem to have become "very masculine" over evolutionary time, Kazunori added. The appearance of such a novel structure is exceptionally rare, he said, and "may be comparable with the origin of insect wings."

Mating lasts 40 to 70 hours thanks to the female's inflatable, spiny penis

Researchers discovered these cave-dwelling insects in Brazil's Peruaçu River Valley. At first glance they're unremarkable, Yoshizawa said, because they closely resemble other cave-dwelling insects in the region. But when it's time to mate, the female mounts the male and penetrates his vagina-like opening using her gynosome — the term used to designate her female-penis. This mating behavior lasts for an impressive 40 to 70 hours, thanks to the female's inflatable, spiny penis that anchors itself to the male's internal tissues. During this time, the female Neotrogla gathers large quantities of sperm that she uses to fertilize her eggs. "Because the female's anchoring force is very strong, a male's resistance may cause damage to his genitalia," Yoshizawa said. "Therefore, it is very likely that entire mating processes are controlled actively by females, whereas males are rather passive."

Michael Siva-Jothy, an entomologist at the University of Sheffield, UK, who didn't participate in this study, said in an email to The Verge that the findings are "really, really exciting." Examples like this, he noted, allow researchers to examine various factors that drive how these traits evolve. When asked how the female penis might have evolved, however, Siva-Jothy was stumped. "This is so bizarre," he said. "I don't know where to begin."

This female penis has no precedent

Yoshizawa was equally surprised upon seeing these insects for the first time. "Usually, a new structure evolves as a modification of a previously existing structure," he said. But this female penis has no precedent. Evolving a structure like this, Yoshizawa said, is "exceptionally difficult" because the development of this form of mating would have necessitated the harmonious evolutions of both male and female genitalia, and their exact match.

Researchers are now collecting genomic data to compare these insects to other, closely related species. They hope this information will help them understand how the development of the female penis occurred. "These females likely represent the most ‘macho' females among animals discovered to date," Yoshizawa said. "It is important to unveil why."