Here's what Apple's CarPlay will look like in your next car

Volvo, Mercedes-Benz, and Hyundai are all launching vehicles with CarPlay support this year

It's been a long time in the making, but Apple's CarPlay is finally here. Well, almost. At the New York International Auto Show, Apple is showing off its CarPlay integration with a handful of its automotive partners. We got a chance to take a look at how the system will work in upcoming vehicles from Volvo, Mercedes-Benz, and Hyundai.

CarPlay is a lightweight version of iOS that's designed specifically for use in the car. Plug in your iPhone and you get quick access to the things you need the most while driving, namely navigation, music, phone calls, and text messages, in a familiar interface on your car's existing display. CarPlay also allows access to third-party apps that have been updated to support it. Right now, only a handful have been, but it is possible to listen to your Spotify playlists or podcasts through your car stereo.

CarPlay relies heavily on Siri — virtually all of the input is done through voice commands and car manufacturers can actually disable text input if they desire. The system uses the microphones already built into the car to listen to your voice, rather than relying on the iPhone's microphone. Siri is used to dial numbers, send and read text messages, call up music, and set destinations.

CarPlay works differently in each vehicle, depending on hardware configuration

Depending on a car maker's preference and hardware configuration, CarPlay will work differently in each vehicle. Hyundai and Volvo have both opted for touchscreen interfaces to control CarPlay, while Mercedes-Benz relies on a hardware knob and a handful of buttons to control the system. Since CarPlay is so similar to iOS, it lends itself to touchscreen interactions, and the Hyundai and Volvo systems seemed much easier to use than Mercedes' clunky knob.

Similarly, each car maker integrates CarPlay into its existing systems differently. Mercedes and Hyundai pretty much treat CarPlay like an app, completely separating it from the native navigation, Bluetooth, and climate-control systems. Volvo is taking a different route: it has built an interface that integrates CarPlay in with the native systems, providing quick access to things like climate control without requiring the driver to exit CarPlay. I found the Volvo system to be the easiest to use and understand, and it didn't feel like I was using two completely different interfaces like with the other car makers. 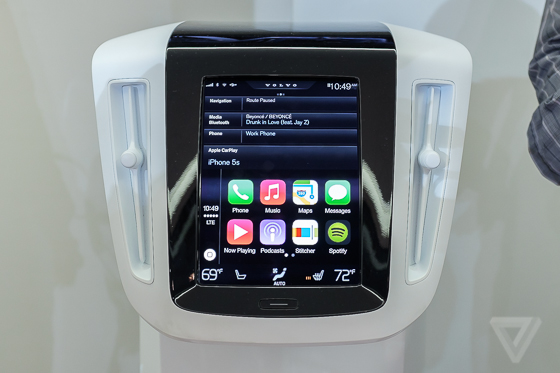 An example of how CarPlay will look in future Volvo vehicles.

By necessity, CarPlay duplicates many of the things car makers already provide. It's a second music player, second navigation system, second phone app, and second voice interface. The car makers don't have much of a choice in this regard — if you don't own an iPhone, you're still going to want those features in your car and they are obligated to provide them. Still, despite duplicating almost everything your car already does, CarPlay is nicer to use than virtually any automaker's interface, and integrates with your text messages and smartphone apps much better.

Apple’s initial CarPlay roll out is rather limited — in addition to Hyundai, Mercedes-Benz, and Volvo, just Ferrari and Honda have committed to launching cars with it this year. Thirteen other makers, including BMW, Toyota, Ford, and Chevrolet have also signed on board to support CarPlay at some point in the future. Third-party car stereo-maker Pioneer has also announced head units that support CarPlay and can be installed in older vehicles.

CarPlay is off to a promising, if slow, start

CarPlay has been in development at Apple for years, and it feels like we've been waiting even longer for this kind of integration with our vehicles. It's not clear if this will be the car interface of the future, but it's off to a promising, if slow, start.