Since Marissa Mayer took over at Yahoo, she has made a steady push to rebuild the photo-sharing community at Flickr by overhauling its products. Today Flickr is getting its most dramatic makeover to date, with a total redesign of the apps for iOS and Android that make it a more direct competitor to Instagram and other photo-sharing services. It takes the easy-capture and sharing features of Instagram and pairs them with the worry-free backup of Dropbox and Google+. The result is an app that is faster and more fun to use, even as its imitation of features that others made famous will likely draw charges of copying.

Previous incarnations of Flickr for mobile devices felt more like boiled-down versions of the website than an app built for capturing and browsing images. Flickr 3.0 improves on its predecessors with a faster, more fluid feed that replaces the previous dual-column view with a scrolling feed of single images. (Photo sets still display as square grids, but you no longer scroll side to side to expand them.) Flickr gently crops non-square photos in the feed, but tapping reveals them at their full dimensions. In a slick design touch, you can tap a button on each photo to see its embedded metadata, including which camera it was taken with — and Flickr commissioned wireframe drawings for 57 popular cameras that show up at the top of the metadata page.

The redesign places a new focus on interaction, adding options to favorite, comment, and share photos below every image. And it adds a more powerful search option to the the top of the feed, drawing on image-recognition technology acquired over the past year to help you find high-quality images of more than 1,000 objects recognized by Yahoo's algorithms. (As on any image-search platform, you should start by searching for "monkey.")

The camera view works largely as before, with 14 filters that can be applied live through the viewfinder or after the fact. After taking a picture, you can auto-enhance it, crop it, or use Flickr's robust editing tools to adjust exposure, contrast, white balance, color levels, and other settings. More significantly, the camera can now shoot, edit, and upload high-definition videos of up to 30 seconds. As on Instagram, you can delete individual segments if you want to re-shoot part of your video along the way. And you can apply the same filters to videos that you can to your photos. 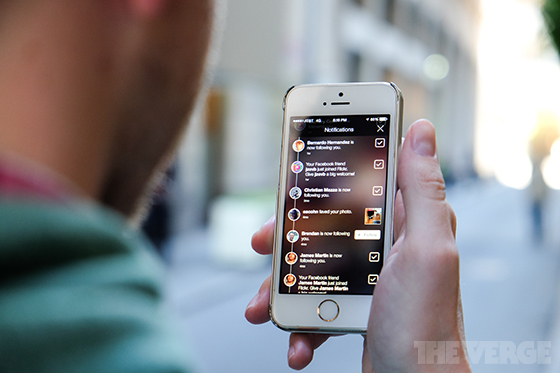 The app's profile section is home to your photo stream, your albums, and any groups you have joined, along with notifications. (On Android, notifications get their own section.) The app's settings also live there, including the option to automatically sync all your photos to Flickr, which leads the industry with a terabyte of free storage. The sync feature, which came to iOS last year, is now available on Android as well.

The Flickr apps for iOS and Android are similar but not identical. On iOS, the navigation controls are on the bottom of the app, as they are on Instagram; on Android, they're at the top. And the editing tools work differently depending on your platform — on iOS, they're accessed from a menu underneath the captured image; on Android, they pop out in a flywheel design layered over the photo.

"The essence is the same."

Bernardo Hernández, who took over Flickr last summer after previously leading Google's Zagat division, says Flickr is still trying to solve the same problem as it was when the company launched in 2004: organizing your photos, making them look beautiful, and helping you share them with a broader community. "The essence is the same," he says. "But now instead of a few hundred pictures a year, we take thousands of pictures a year. And instead of one camera, we have multiple devices." Over the years, 100 million users have uploaded more than 10 billion photos to Flickr. But along the way, its rivals took the lead in attracting our time, our attention, and our photos. With its redesign, Flickr's mobile apps are more competitive than they've ever been — even if they had to mimic the competition to get there.