'Dream Sushi' and the art of the ringtone

'Dream Sushi' and the art of the ringtone

James Ferraro is the today of sound

It’s been years since ringtones were a multimillion-dollar industry, but the medium still has value for James Ferraro. As part of his exhibit for New York’s MoMA PS1 in Queens, 100%, the 25-year-old Los Angeles-based experimental musician composed a suite of 18 ringtones that he says are meant to evoke, the "aestheticization of capitalism." They’re all available for free download for Apple and Android phones on a lime-green website built and hosted by the museum. 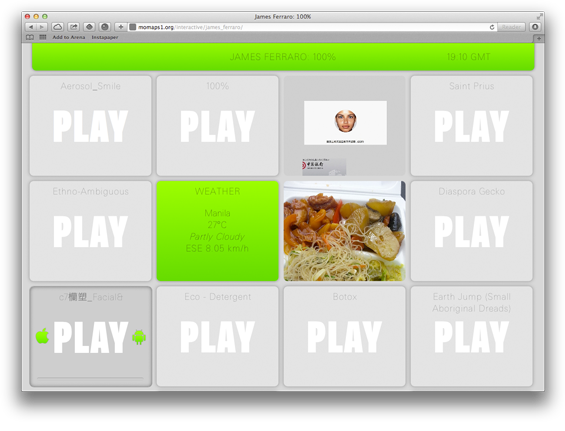 The exhibit is actually a musical triptych, comprised of not just the suite, which is entitled "Eco-Savage," but also hold music for the museum’s phone system ("Saint Prius"), and literal elevator music for its elevator ("Dubai Dream Tone"). All three pieces are a smooth, mall-like wash of synthesized melodies, glitchy computer noises, and Siri-style voices. The music sounds like cheesy New Age spa Muzak, but the spoken words suggest a deeper point being made about the hypocrisies of a certain kind of consumer culture. In one ringtone, entitled "Abs," splashing noises and pops trade off with a robo-voice intoning, "Freeway. Cotton yoga pants. Recovery. Oil. 100 percent hydration consciousness." Other ringtones are named things like "Dream Sushi," "Bottle Rain Water" and "The Warming Planet." It’s unclear if he’s taking potshots or just parroting the weird world around him in a kind of deadpan reappropriation of corporate ad-speak. It may be both. Ferraro comes across as an astute observer, if not necessarily a sharp cultural critic. "I wanted to create a narrative about the idea of Whole Foods and ‘going green’ and this culture of ethical living that’s sort of like the new spirituality," he said during a telephone conversation from his home in LA. "But I also wanted to look at the cause and effect of consumerism on the third world."

In many ways, 100% represents an evolution of Ferraro’s 2011 album, Far Side Virtual, which British avant-garde music magazine, The Wire, lauded as the album of the year, while incongruously likening it to "music to a corporate video." Like the ringtone suite, FSV paid homage to passe technological memes such as Second Life and The Sims, and incorporates the same type of computery soundtrack music and speech bits. Taken in its entirety, the album is more effective as an inside joke than as standalone music. The Wire summed it up: "Whether or not its creator is giggling through a bong-smoke haze, Far Side Virtual is a convincing evocation of the digital dreamtime." Ferraro says he is obsessed with capturing what he calls a "pan global generic sound," or "global ambiguousness," that he likens to "Froyo" in its total lack of controversy. His artist’s statement for PS1 elaborates: "It’s like a fake indoor rain forest in Dubai’s international airport with the most advanced systems to create sustainable ecologies and habitats; or the empty utopian soundscape of a luxury tract house community." 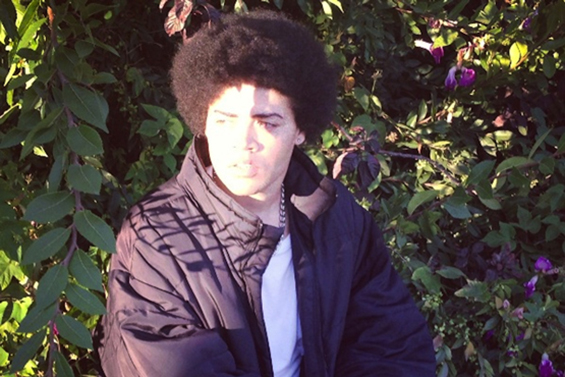 Photo courtesy of the artist.

In some ways, Ferraro’s impulses come from the same place as the indie music movement called vaporwave or the recent controversial explosion of so-called normcore fashion: all adopt cheesy, outdated aesthetics as a kind of critique of modern consumer trend cycles. But in 100%, Ferraro moves towards something more disruptive. When he name-drops "Virgin Air," then immediately follows with the words "West Nile virus," it almost feels like he’s breaking a taboo. By dragging a popular corporate brand into an unstable and unpredictable environment, he might expose something unpleasant about it. Or maybe about us.

Assistant curator Christopher Lew, who put together the exhibit, says that on opening night, there was a "small crowd" of people crammed into the museum’s elevator. The gentle gonging sounds coming from its speakers could easily have been ignored, if not for the occasional vocal interjections. "When you have computer voices saying ‘West Nile virus’, or ‘Clorox’ or "AT&T", you don’t know if you should be scared or laugh," says Lew. Instead, they just stood there, listening, not pressing any buttons.