Can Facebook succeed where every 'people discovery' app has failed?

Two years ago, a battle was raging over "people discovery" apps. Highlight wanted to introduce you to strangers on the street, Sonar hoped to connect you with friends of friends at a bar, and Glancee wanted to hook you up with nearby Tolkien fans. The ambient awareness technology behind all these apps was amazing, but people weren’t comfortable using them. Facebook acquired Glancee, and not a moment too soon. The people-discovery bubble was about to burst.

"We saw in the data that even though everybody was talking about social discovery, the data wasn’t corroborating that. It was the opposite." says Glancee founder Andrea Vaccari, who’s now a product manager at Facebook. "Our users were not engaging as often with [strangers] nearby. They were using it just to meet up with friends." After joining Facebook, Vaccari was tasked not with building a people-discovery app, but with building a friend-discovery app. After two years in the pipeline, Nearby Friends begins rolling out today on Android and iOS. 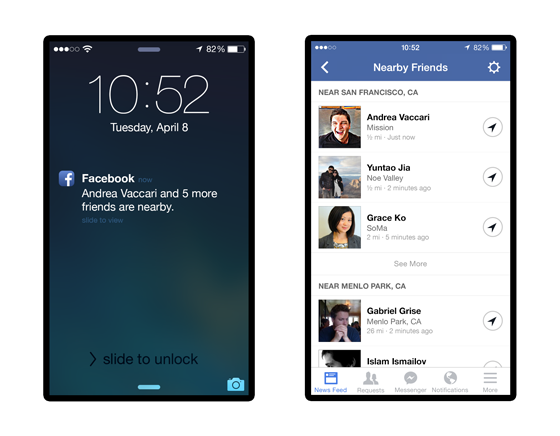 But unlike Paper, Facebook’s news app, and Messenger, the company’s chat app, Nearby Friends isn’t an app — it’s a tab inside the Facebook app’s "More" menu. Tapping Nearby Friends lets you opt in to using the feature, which lets you see which of your friends are nearby, presuming they’ve also turned on the feature. Facebook shows a list of friend locations by neighborhood, or if the friend is far enough away, by city — but not down to the block, like with most people-discovery apps. Tapping on a friend lets you message them to arrange a meet-up. If you’re trying to find each other inside a large park, for example, you can tap the location-arrow button to send a friend your precise location. If you’ve enabled Nearby Friends, Facebook will also send you a push notification if somebody unexpected turns up nearby.

Facebook is dedicated to Nearby Friends, but seems conflicted about where exactly to put it

Vaccari says that by only showing approximate locations, people might for the first time actually consider using a friend-finder app. Yet, Nearby Friends feels buried inside Facebook’s "More" menu, a drawer of features that doesn’t get tapped too often, according to recent research. Facebook, which liberally A / B tests new features, probably knows this, so the company surfaces Nearby Friends elsewhere in the app, from the News Feed to inside the app’s buddy list window. Facebook is clearly dedicated to Nearby Friends as key component of its app, but seems conflicted about where exactly to put it. It’s a problem Facebook seems to be facing more and more as it looks to add features without adding clutter to its app. 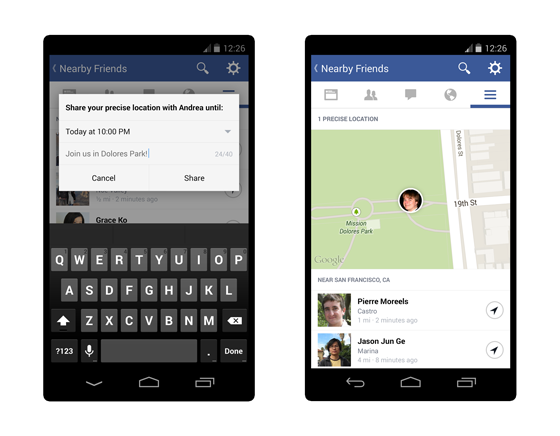 Apple’s Find My Friends and other standalone apps already offer the ability to see the location of nearby people who you’ve added, but Vaccari thinks that the precise "face on a map" approach employed by these apps turns people off. "While building Glancee, we learned that sharing that you’re nearby is a lot more powerful than sharing exactly where you are," says Vaccari, "because people are much more likely to share with a larger audience." Sharing your neighborhood is certainly less creepy than sharing what restaurant you’re eating at with the world, but it remains to be seen if people really want to see who’s around. Programmatically creating serendipitous encounters might make these magical moments feel less magical. Ambushing a friend after seeing their check-in on Foursquare or Facebook can be awkward.

"Sharing that you’re nearby is a lot more powerful than sharing exactly where you are."

While I haven’t had a chance to test Nearby Friends myself, Facebook says that the feature has a minimal impact on your phone’s battery — an issue that has impeded the success of many location-tracking apps in the past. "We try to be as smart as possible," says Vaccari. "90 percent of the experience is triangulation (versus more battery-intensive GPS). The feature consumes about 0.4 percent of your phone battery per hour, Vaccari says — a figure he discovered by tracking the battery life of a few thousand Facebook employees who tested the feature. "Most people won’t notice it," Vaccari says, "and if you’re below 20 percent battery we stop." Facebook also limits the number of push notifications it will send users. Nearby Friends will buzz your phone when a friend is visiting your city, but not when you get to work and have colleagues nearby. 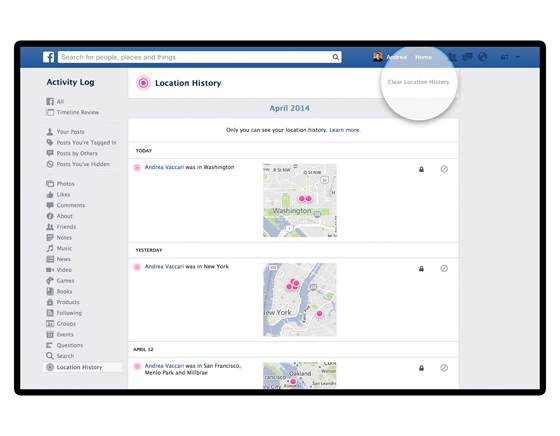 Nearby Friends is obviously about helping you find friends — but it’s also about helping Facebook find you. As long as Nearby Friends is turned on, Facebook tracks your location every 15 minutes or so, even if it’s only on a general, neighborhood level. In an effort to nip privacy concerns in the bud, Facebook displays a list of your locations inside your private Activity Log, which can be accessed from your web profile page. None of your friends can see this data, and if you’d like, you can erase it all with a click.

With better data on the location of its users, Facebook could potentially show more relevant ads, make better recommendations (when and if the company’s Graph Search feature launches on mobile), and enhance location-based Groups. But even with transparent controls over who can see your data, the idea of being tracked by Facebook will nonetheless intimidate some users. This is quite likely the reason why Facebook made Nearby Friends opt-in, and gives you very granular sharing controls beyond your broad friends list. "It’s not an easy launch. Some people won’t want to use it, but they don’t have to," says Vaccari. "My hope is that when they’re reminded with News Feed stories about the opportunity to meet friends, people will start to appreciate that. Even if you have the impression that this is scary, it’s not."