Skyscraper concept blocks the sun with hundreds of retractable umbrellas

Share All sharing options for: Skyscraper concept blocks the sun with hundreds of retractable umbrellas

An ambitious concept for a Middle East-based media headquarters would automatically erect a giant sunshade when necessary. Developed by REX, an award-winning New York-based architecture firm, the concept would house "two sister Middle Eastern media companies" in a pair of towers.

REX's brief for the towers was simple: propose two elegant structures that make reference to traditional Arabic architecture. At first glance, the dual towers certainly look attractive, but are fairly conventional in their exterior design. Each would house studios in their basements, a large common space over the first few storys, and news, broadcast, and general office facilities above. However, REX's proposal fits enormous retractable sunshades within the structures which overlap to create a 700-foot tall and wide curtain, shielding workers from direct sunlight. 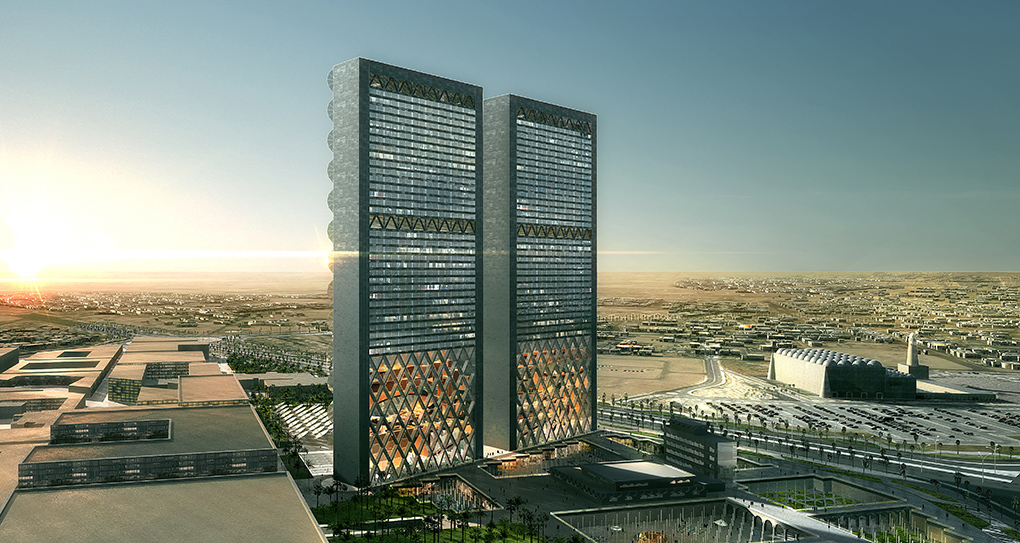 These shades resemble giant parasols, 12-sided umbrellas with concave edges and a light curve to their spines. The system has been designed to reference traditional Arabic architecture on a grand scale; when interlocked, the shading structure looks like a giant example of Mashrabiya panelling, a type of intricate latticework commonly found adorning windows.

The shades would be installed on both the eastern and western facades of the towers, but only one side of the buildings would be shaded at any given time. At the correct point in the day, determined by the sun's position, a 60-second transformation would see one side's shades retract while the others open.

On the towers' eastern facade, LEDs would be integrated into sunshades, which would be centrally controlled to form a giant "television screen" across both buildings. This screen would broadcast the companies' content to the entire city.

The client for REX's bold plans remains confidential, as does the buildings' potential location and cost. The architecture firm was invited by the unknown corporations to create the new headquarters as part of a competition open to numerous firms.

All images copyright and published with the express permission of REX.