With Paper, Facebook set out to prove that it could "think small," rebuilding itself from the ground up for mobile devices. This meant removing lots of clutter, and in some cases, leaving out certain features that some Facebook users might have considered essential. Today, Facebook is launching Paper 1.1, an update meant to add back a few of Facebook's most important features, while continuing to think about how Paper can be different.

Paper 1.1's most noticeable addition is the inclusion of Birthdays and Events, two of Facebook's oldest features. But instead of bundling the two into your News Feed as Facebook's main app does, Paper adds them to the Notifications screen. "We thought Notifications would be a good place to put this stuff," says Michael Reckhow, product manager on Paper. "These are the most time-sensitive things you need to look at every day." Reckhow's conclusion might seem obvious, but inside a company that continually adds functionality without removing much, finding the logical place for any new feature can be difficult. 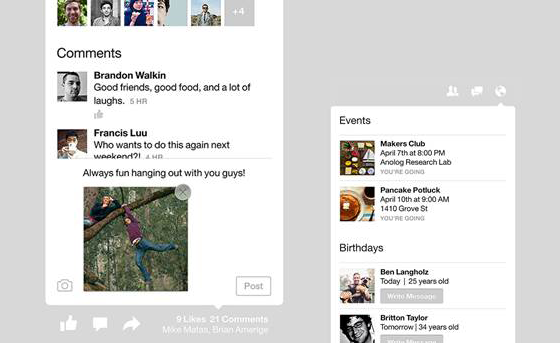 Nearby Friends, a new Facebook feature that launched yesterday, was relegated to the app's "More" menu, for example. Giving Nearby Friends prominent navigational bar placement would've meant removing another feature that had been there for years, like the Friend Requests button. Paper seemingly isn't held to this kind of standard, and can mix and match whichever Facebook features it likes. Paper grabbed Facebook's popular photo comments feature for its latest update, but not Nearby Friends. "We are focused on some things that overlap [with the main Facebook app]," says Reckhow, "but we're trying to stay with what we do best in Paper: presentation, and telling you the most important things you need to know on a daily basis."

Facebook recently announced that it would strip messaging out of its main app, but Reckhow says he has no plans to do the same with Paper. "We’ve tried to keep Paper independent, and focus on the core things we’re doing and not get caught up in larger strategies going on in the main Facebook app," he says. Paper still works a lot like Facebook, despite its handsome looks and animations — but if Reckhow and the Paper team have their way, it could eventually both look and feel a lot different. One thing that won't change too soon, however, is Paper's focus on your News Feed. Reckhow says that News Feed is by far its most popular section, followed by Headlines, Tech, and Ideas.

"We’ve tried to keep Paper independent... and not get caught up in larger strategies going on in the main Facebook app."

It will all be for naught if Paper can't acquire new users. After its first month on the App Store, where Paper received prominent placement from Apple, the app has rarely jumped back into the top 500 most-downloaded apps. But Reckhow isn't worried. "The chart doesn't really factor in to whether we're happy," he says. "It's about when you talk to people who are using Paper, and you ask them how their experience is, and they say 'I love Paper.' That’s something the App Store charts don’t measure."

Facebook is playing the long game with Paper, one of many apps to come from its experimental Creative Labs division. "We understand how to grow apps. We sell growth as a service, and so that’s the least of our concerns," says Reckhow. "We want to reach this point where people are so happy that they'll tell their friends and introduce new people to the product." The typical users looks at 80 stories per day, says Reckhow. "Our early signals say that people are spending a lot of time in Paper."