Apple may be responsible for really kicking off the demand for high-resolution displays on all of ours smartphones and tablets, but it's other companies that have taken the idea and ran with it. That's true on laptops too, where everything from Samsung's Ativ Books to Asus' Zenbooks have received super high-res displays that in many cases outclass even Apple's Retina Macbook Pros when it comes to pixels. Now, Toshiba is taking things a notch further, announcing a laptop with a 15.6-inch 4K display that'll be available in the US for $1,499.99 beginning next week. 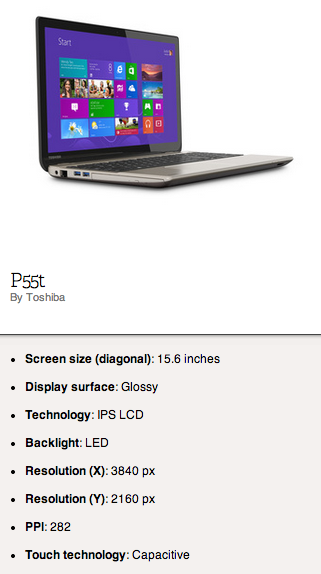 Though laptops with displays that go beyond 1080p have only started popping up recently, they're already offered by a surprisingly wide selection of manufacturers. Most seem to settle on a resolution of 2560 by 1440 pixels (known as WQHD), while some manufacturers like Samsung and Lenovo have opted to go even higher, jumping up to 3200 by 1800 pixels. That makes the effectively 4K resolution of 3840 by 2160 pixels on Toshiba's new Satellite P55t impressive, but not leaps and bounds ahead of the competition.

Its maximum specs do make it fairly compelling though: it has an i7 Haswell processor, includes a 1TB hard drive, and supports up to 16GB of RAM, a Blu-ray drive, and one of AMD's new Radeon R9 series laptop graphics units with 2GB of memory. Toshiba doesn't make it perfectly clear whether that specific GPU comes with the laptop at its base price — you can be sure a full 16GB of RAM doesn't — but whatever is powering the Satellite P55t's graphics may just make or break this laptop. It'll need something that's powerful enough to support those millions of pixels all without quickly wiping out its battery.

And with all those pixels, Toshiba is aiming the laptop toward photographers, even bundling in a copy of Lightroom 5 for photo editing. All said, it sounds compelling, though the laptop still has its shortcomings. For one, the Satellite P55t is no Ultrabook: if it has the same dimensions as Toshiba's seemingly identical P50t, which appears to be its previously announced UK counterpart, the P55t will be about 1.1-inches thick and weigh a somewhat hefty 4.85 pounds.

Naturally, all of the high-res laptops right now seem to make some tradeoff between price, resolution, and size. We've broken them down by resolution in the chart below, featuring models with WQHD resolution on the left and the higher 3200 by 1800 pixel resolution on the right. Even Toshiba itself offers one of the more compelling options competing for attention here, the Kirabook. Because these are largely 13.3-inch laptops too, the higher-resolution options have nearly the same pixel density as the Satellite P55t anyway: them at 276 pixels per inch, and Toshiba at 282. 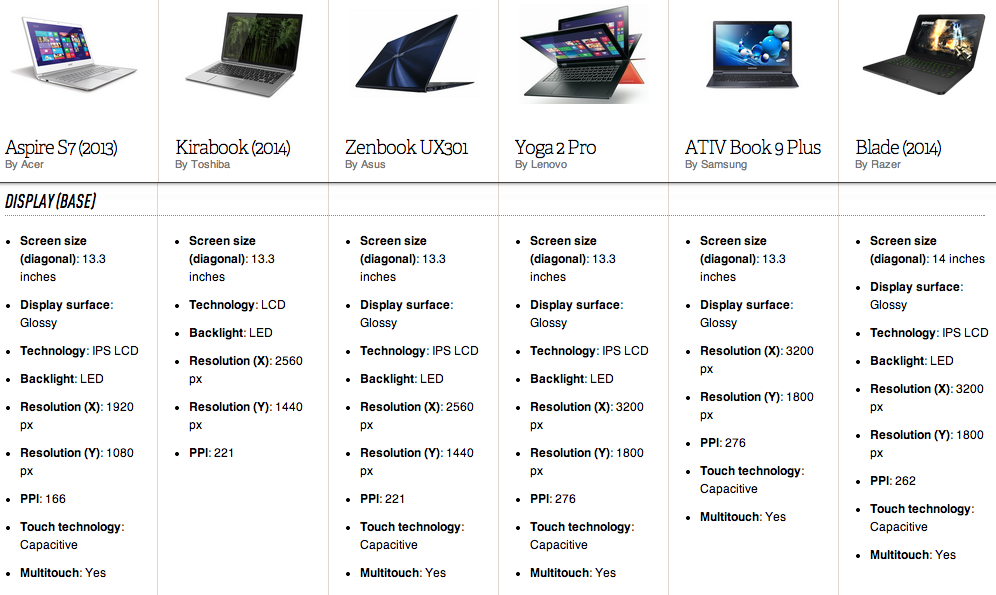 Click above for full specs on these five laptops and the Satellite P55t. The S7 must be upgraded to include a higher resolution display.

That these laptops offer similarly high resolutions without the extra bulk is a huge plus, and will likely win the average buyer over. But there's a big catch on many of them when it comes to graphics, and that's where Toshiba's new Satellite could edge them out. When including the Radeon R9 series notebook GPU, the P55t should ber more than ready to take on the integrated HD Graphics and Iris graphics that come with the others. While Iris graphics have really stepped up performancef beyond what most people have come to expect from an integrated GPU, discrete units still offer the opportunity for laptops to perform far better.

The Satellite's final high-res competition comes from Apple's MacBook Pros. As with smartphones, Apple actually has some of the less impressive pixel counts out there, really letting something like the Satellite stand out. What the MacBook Pros do have are nearly all-metal bodies and impressive build qualities that are hard to match. At the very high end, the 15-inch model includes an option for discrete graphics with 2GB of memory too — it's a pricier option, but a compelling one if you're not sold on the difference in resolution once pixel density is that high.

Now that it's here, it's hard to imagine that we won't soon start seeing more and more 4K displays built inside of laptops. It may be a little while before they come down to thinner ones such as Apple's MacBook Pros, but manufacturers like Toshiba and Razer show that plenty is possible, even in a small body.

If you want to learn more about any of the products mentioned above, all of our information on them can be found through the database box located beneath the article. For more on laptops and just about every product around, you can check out the full Verge Database right here.