Remember the jukebox? No, not the rock and roll machine hugging the wall at your local dive bar, but the digital music players we all used to manage MP3s back in the late 2000s. There was Winamp, Musicmatch Jukebox, and later iTunes. These apps listed your library of songs track by track and often featured big, visible play / pause / forward buttons that emulated the look of a car dashboard. They all seemed to agree that this is how your music should look.

In the age of streaming music, meanwhile, Spotify has seemingly taken the lead. Part of its appeal has always been in its no-frills, familiar jukebox interface which made streaming music as easy as using iTunes. But as of late, Spotify has looked a bit archaic, a relic of the post-Napster era where "click to play" was a killer feature. Today, Spotify is rolling out perhaps its biggest design update ever for web, iPhone, Android, and Mac — a revamp which draws liberally from competitors like Rdio while establishing one identity across platforms for the first time. Spotify is finally moving beyond the jukebox.

The update adds handsome Proxima Nova type, rounded iconography and buttons to reflect the company's new-ish logo, large photos on artist pages, and a dark color scheme that accentuates important areas (like play buttons) with Spotify's trademark green. The service also now uses circular avatars to represent people and square avatars to represent albums. No longer is every Spotify page just a list of tracks. "This is the first redesign this big that we've done," says Michelle Kadir, Spotify's director of product development. "We've done bits and pieces along the way and launched on new platforms, but this is the first we've done of the whole service since the beginning." 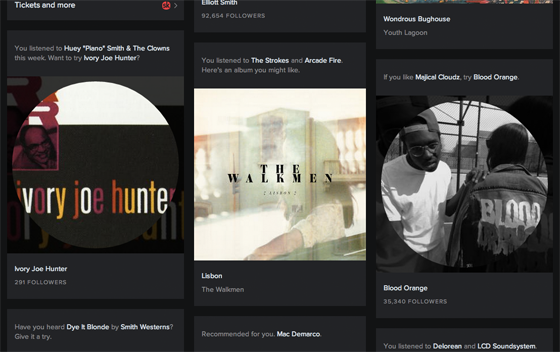 If Spotify's new design looks familiar, that's probably because the company publicly tests most of the software and visual updates in its desktop apps before rolling them out to the masses. Today's update brings Spotify's new design to everyone, and more importantly to mobile — a domain where Spotify has traditionally iterated slowly. Spotify's new mobile app looks nothing like the old one with its dark new color scheme, Rdio-esque frosted glass, and an emboldened free shuffle feature which the company introduced last January to reel in new users.

Perhaps more importantly, Spotify's latest visual redesign brings with it one of the company's most requested features: a "collection" view to manage your music. The company in fact announced such a feature back in December 2012, but had failed to come through on delivering it. Now called "Your Music," the new section inside the Spotify sidebar lets you save albums, songs, and artists without needing to create playlists. The feature is particularly useful on mobile, where navigating an epic list of playlists can get tiring. You can now choose to save specific artists or albums for offline listening.

Today's update has notably killed Spotify's popular "star" buttons, which let you instantly save tracks to your Starred playlist. "We no longer want to promote Starred for quick-saving but rather transition its usage to curation of your favorite music," says Kadir. "We'll do this by removing the Star action and treating Starred as a normal playlist — you add songs to it as you would with any other playlist." Unfortunately, without its famous yellow stars (and with the addition of a few prominent design cues), the app looks more than ever like a darker shade of chief competitor Rdio — but that might not be such a bad thing for Spotify. The company has grown into an Apple-esque behemoth, sucking up the best ideas around it one by one.

For Rdio, distinguishing itself from larger competitors like Spotify will seemingly get even harder. The site's "Your Music" view was one of its most valuable selling points — and now Spotify has grabbed the feature wholesale along with its name. Despite its various inspirations from Rdio to Android's "Holo" interface, the latest version of Spotify feels like the best Spotify ever. "The Swedish word lagom doesn't have a good equivalent in English, but it means 'perfect balance' — not too much not too little," says Spotify designer Andreas Holmström, "and this is definitely reflected in the new Spotify."