Apple and Roku have a new competitor in the living room. Amazon just announced its own video streaming device: the $99 Amazon Fire TV. It starts shipping today. "We need to invent and simplify on behalf of customers," said Amazon's Peter Larsen. During the presentation, Larsen went over three pain points of current devices: search, performance, and "closed ecosystem." Fire TV promises to avoid the problems that plague other living room hardware, according to Larsen.

In terms of performance, FireTV features a quad-core processor and 2GB of RAM, which Larsen said should eliminate any hint of lag. Amazon claims it's three times faster than the latest set-top boxes from Roku and Apple. Amazon is also looking to avoid complaints of a closed ecosystem by bringing in numerous partners. "It's got a ton of content," said Larsen.

All the apps you would expect

Hulu, Netflix, YouTube, Vimeo, MLB.tv, and the NBA will be among the apps available on Fire TV. Amazon's Instant Video takes top billing, but the company says it wants to help customers find the best deal for most videos with a "best value buy box." This will reveal where a show or movie can be watched cheapest, but only Amazon Instant Video and Hulu Plus will be included in results at launch. Amazon is also packing in some extras that take advantage of its other online services. A photos app will display all of the mobile shots you've backed up with Amazon Cloud Drive on your TV. And the same X-Ray features that automatically provide cast details when watching videos on Amazon's Fire tablets are making their way to Fire TV.

As for how you actually organize and watch content, you can add stuff to a watchlist or just start playing it instantly. Amazon has also built in a feature it calls ASAP, which "predicts which movies and TV episodes you’ll want to watch and prepares them for playback before you even hit play." The Fire TV remote looks relatively small and compact, though it manages to pack in a number of buttons. Amazon has also built in comprehensive parental controls, letting parents whitelist certain content that's displayed in a custom menu interfaced designed for young viewers. Voice search "that actually works" is also included. "There's no shouting across the room at your TV, which is irritating," Larsen said. That was one of many insults he directed at the competition. Larsen was particularly aggressive when referring to Microsoft and Xbox Live, saying that users "have to pay twice" with two subscriptions to access content like Netflix. 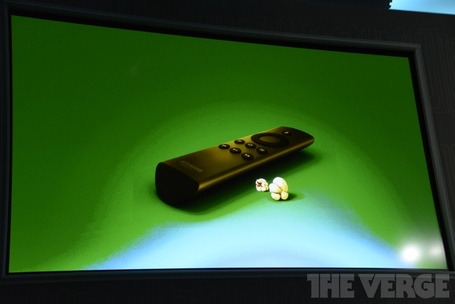 Amazon is also pushing the gaming capabilities of Amazon Fire TV. A gamepad for the set-top box was leaked in international regulatory filings last month, and it's tailored for console gamers, clearly borrowing inspiration from Microsoft's Xbox controller. The Fire TV gamepad will retail for $39.99 and include 1,000 Amazon coins — the company's virtual currency — that can be used to purchase games. And those games will be cheap: Amazon claims the average selling price for paid games will be just $1.85, and there will be plenty of free-to-play titles (over 1,000) as well. Obviously these games are no match for dedicated consoles, but they could appeal to casual users that normally only play games on a smartphone screen.

Today's announcement is the culmination of rumors and speculation that have spanned the last year. For a long time now, Amazon has remained on the sidelines and refrained from making its own living room device. Instead, the company has seemingly been content bringing its Amazon Instant Video software to every feasible piece of hardware — from video game consoles to Roku's streaming boxes. But clearly that's no longer enough; with its own platform, Amazon now wields full control of the entire user experience from start to finish. That strategy has proven successful for the company's Kindle tablets, and Amazon is certainly hoping that lightning can strike twice.

But competition for the living room is fierce, and one of the pressing challenges Amazon immediately faces is making Fire TV stand out in a world of Chromecast, Apple TV, and Roku. Based on today's unveiling, the company is off to a good start.

More from this stream Amazon takes aim at your TV: the full story