Trial by Fire: can Amazon stand out in a fierce set-top box market?

Trial by Fire: can Amazon stand out in a fierce set-top box market?

Today marked the introduction of Amazon's Fire TV set-top box, setting up the latest battle in a relentless war between electronics companies for a presence in your living room. In a letter to customers on Amazon's website, CEO Jeff Bezos describes Fire TV as "the easiest way to enjoy Netflix, Prime Instant Video, Hulu Plus, WatchESPN, low-cost video rentals, and more." But others including Apple, Roku, and Google have all made similar claims in the past. Amazon says its device is more powerful than the rest (gaming consoles obviously excluded) and offers a more intuitive user experience. The company is admittedly late to the set-top box market, but that's not stopping it from making bold claims right at the outset. Is Fire TV all that Amazon cracks it up to be? Let's take a look at the current field of products.

In terms of raw specifications, Amazon has substantially pulled ahead of other devices on the market. Fire TV features a quad-core processor and 2GB of RAM, which dwarfs the 512MB that's become standard in competing hardware. It's also certified to pump out Dolby Digital Plus surround sound, another distinguishing factor that's not offered on other sub-$100 boxes. Bezos touts the Fire TV's "fluid interface" in his announcement letter, and executive Peter Larsen used Amazon.com customer reviews to underline the sluggish performance that can sometimes plague set-top boxes. "It’s painful," he said on stage. But Amazon is making things seem more dire than they really are. Customers rarely complain about operating speed when it comes to the Apple TV and Roku 3. Even Google's Chromecast wastes little time in displaying whatever content you're trying to watch on the big screen.

The specs are powerful, but they may be overkill

The thing that most often slows down the experience of navigating a set-top box is search, and it rarely has anything to do with raw horsepower. Instead, poor design is most often at fault. This is another point that Amazon touched on in its presentation. Larsen even used our own review of the Apple TV to make his point. There's got to be a better way than using a remote to peck in one letter at a time, and Amazon thinks its fast and accurate voice search is the answer. ASAP, a feature that automatically readies a video you're likely to watch next, could also cut down on awkward waiting (assuming it works as advertised in the real world). The inclusion of universal search, something we loved in the Roku 3, is also a huge plus. Gaming is where Fire TV's impressive specs are likely to be felt most. Since you'll be playing Android games on the TV, Amazon has seen fit to pack in the same guts you'd find in a high-end Android smartphone. 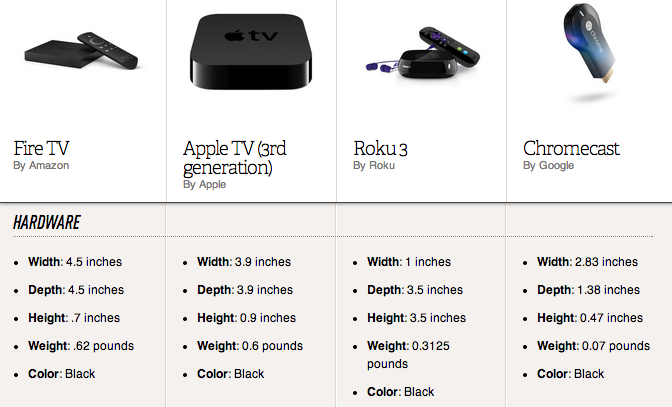 Amazon is ticking off two big boxes right away with Fire TV: Netflix and Hulu Plus. The company claims that including these apps — along with others like YouTube, Crackle, and WatchESPN — proves that Amazon isn't out to lock down Fire TV's ecosystem. It's a fair point; even as Amazon and Netflix remain engrossed in a war for exclusives and new content, Amazon doesn't want customers to lose out on House of Cards. More choices are incoming: MLB.TV, Watch ABC, WWE Network, Twitch, and other apps are all confirmed as "coming soon." But Amazon still faces a significant game of catchup with other devices, especially the Roku 3. Roku has amassed a huge store of apps that will run on its set-top boxes. You won't find Spotify on Fire TV or Apple TV, but it's included in Roku's catalog. HBO Go is another glaring omission, particularly since it's already found a home on so many competing products. Showtime Anytime doesn't make for a great consolation prize. 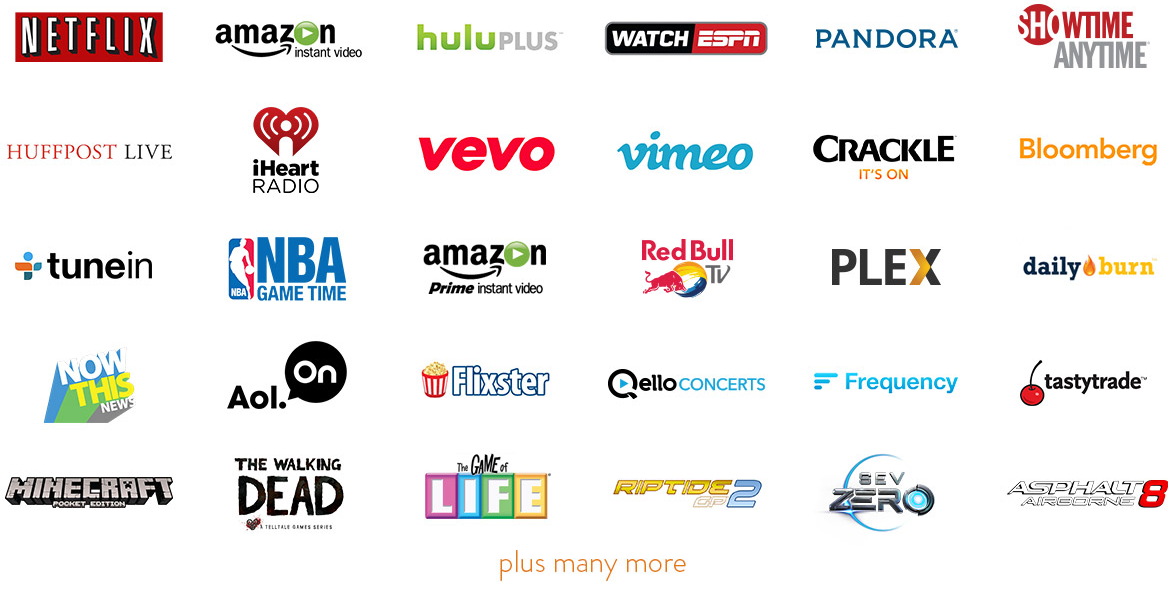 Both Apple TV and Chromecast carry one enormous benefit: streaming from mobile. Even if an app isn't available on the set-top box itself, customers can put the same content on their TV through their smartphone. It's more than a "feature" in the case of Chromecast: it's the very concept that Google's streaming device was designed around. Chromecast's model may be a bit confusing for the average consumer (and that's who Amazon is pursuing with Fire TV), but it means that the product's ecosystem is potentially endless and not limited to a manufacturer's whitelist. The lack of Spotify on Apple TV that we mentioned earlier can be resolved with the help of AirPlay. And that applies to many apps.

Amazon's idea of mobile integration revolves all around mirroring. With Fire TV, you can start playing movies, TV shows, and music on your Kindle Fire tablet and then beam them to the TV for everyone to enjoy. But there's nothing about app mirroring on Amazon's product page. Whether that arrives later is an open question, but you're not getting anything on par with casting or AirPlay on day one. Instead, the crucial task of expanding Fire TV's app selection rests with Amazon alone. But for the most part, the company is doing a good job covering most bases at the start. And the combination of Amazon's Instant Video catalog with Netflix and Hulu means you'll probably be able to find what you're looking for. Still, the point remains that Amazon isn't setting itself apart from Roku and Google in any major way here. Amazon says Fire TV doesn't have a closed ecosystem — but it's not exactly open, either.

Amazon is putting an enormous focus on Fire TV's gaming capabilities. It's basically a glorified Android gaming console — and we've seen many of those — but Amazon makes Fire TV sound like a component that belongs next to your Xbox One or PlayStation 4. Hundreds of games from developers like Mojang, EA, Ubisoft, and Disney are available at launch, and Amazon promises "thousands" are in the pipeline. And for the most part, they're all dirt cheap with an average price of $1.85. Amazon also claims there will be free-to-play titles aplenty, and buying the $39.99 gamepad will immediately get you 1,000 Amazon coins to help kickstart your Fire TV game library. Microsoft and Sony probably aren't much attention to today's news, but Ouya may have a greater cause for concern. 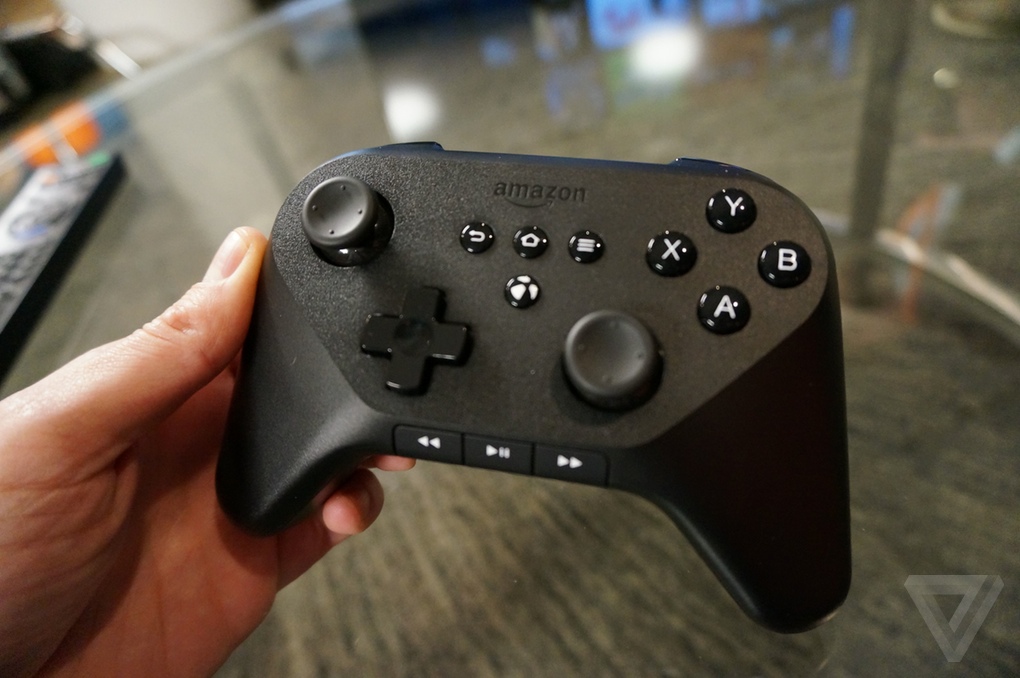 Amazon is likely to sell a whole bunch of Fire TVs. The hardware is impressive and powerful, its user interface is clean (with a fantastic approach to parental controls), and the apps that most consumers want are packed in or will be added soon. There's plenty to like here, including signature Amazon features like X-Ray and WhisperSync. Existing owners of Amazon's Fire tablets can also look forward to some unique second screen experiences. But at launch, Fire TV doesn't offer any immediate and compelling reason to replace your Apple TV or Roku. And it doesn't make Google's Chromecast seem like any worse of a deal at $35. It's a strong foray into the set-top box market, but we'll need more time with Fire TV to determine if it's truly a standout in a crowded field.