Google is crossing off a major complaint about Hangouts this week: the messaging app will finally merge your SMS and Hangouts conversations.  Users can pick between Hangouts and SMS when sending a given message, but that's it. There's no option to use Hangouts with SMS as a fallback option, which is the approach Apple takes with iMessage.

Google also promises that "different message types will be easy to tell apart in the conversation," but it's not as obvious as the company lets on. Your received messages all look the same, with only a small "via SMS" label below texted replies. Sent messages easier to tell apart with a glance; they're green when you're sending regular Hangouts messages, and white when sent as an SMS message. Users that don't like the merged view can revert back to the old style to keep things separate. 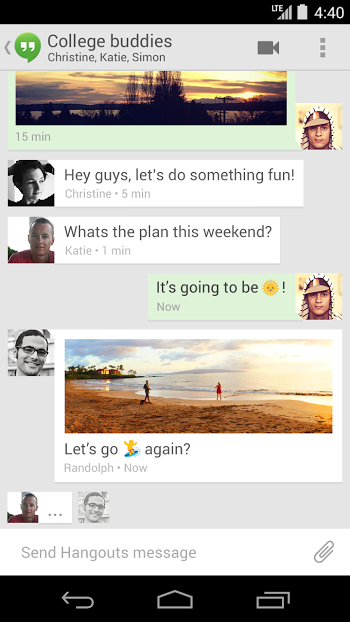 The contact list is also getting simplified with the debut of Hangouts 2.1. It's been whittled down to just two categories: People you Hangout With, and Phone Contacts. Last but not least, Google has also (finally) added a home screen widget for quick access to your conversations. These new features along with improvements to video call quality and reliability will arrive when the latest version of Hangouts hits the Play Store this week.