Share All sharing options for: Apple taunts Samsung to 'copy' its environmental record

Apple is in the middle of a month-long patent trial with Samsung, and the iPhone maker is taking time out — on Earth Day no less — to dig at its competition. In newspaper adverts that accompany a revamped environmental site, Apple takes clear aim at Samsung while highlighting its green-themed energy campaign. "There are some ideas we want every company to copy," reads the headline of the ad, a clear reference to Apple's aggressive shift to renewable energy. The body of the ad also mentions that "there's one area where we actually encourage others to imitate us." 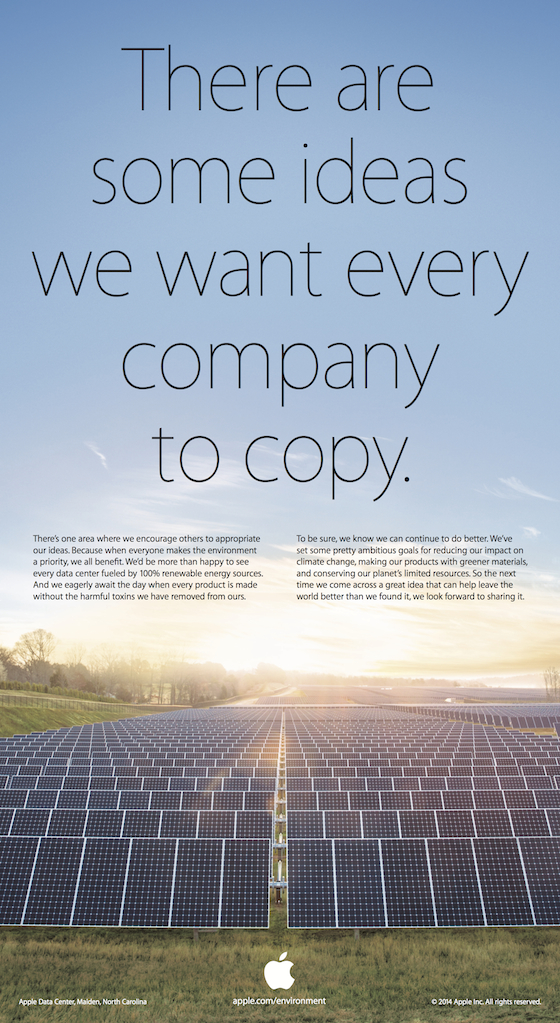 The ads have been placed in two British newspapers today, The Guardian and the free Metro paper that’s primarily distributed to commuters. While Apple is trying to convince a jury of eight that Samsung has copied features from iPhones, iPods, and iPads, Samsung Electronics is marking its 45th anniversary this week by opening its own Innovation Museum in South Korea to highlight historical inventions. You won’t find any iPhones on display though, Samsung’s museum places the Galaxy S II on display as the centrepiece for the modern smartphone revolution.

Update: This article has been updated with an image of Apple's ad, provided to us by the company. A full high-resolution version can be viewed here.