Samsung hopes to make FaceTime a headache for Apple

Share All sharing options for: Samsung hopes to make FaceTime a headache for Apple

After weeks of playing defense against five Apple patents, Samsung this week went after Apple with two of its own patents: one it says is infringed when people make FaceTime calls, and another that covers the photo gallery feature found on iPhones, iPads, and some iPods.

In the case of the video patent, Samsung says it's being infringed every time iOS users begin a FaceTime call over cellular networks, or if they send video messages to one another through the Mail and messaging app. In its opening, Apple referred to the technology as being around from the VCR and Betamax days, a dig Samsung's witness — University of Illinois professor Dan Schonfeld — said was an unfair comparison.

"It was an interesting age for digital video."

"VCR and Betamax were technologies in mid-70s. This was just around the 90s," Schonfeld said. "It was an interesting age for digital video. 20 years after VCR and Betamax," and closer to when CDs and DVDs were gaining in popularity, he added.

Of course, FaceTime didn't arrive until 2010 with the iPhone 4, and it wasn't until iOS 6 in 2012 that the feature officially worked over cellular networks.

Samsung's other patent covers photo galleries, and was originally invented by Hitachi in 1997. The company owned it until 2011, when Samsung bought it. In essence, it covers photos and videos that are grouped into albums and folders, and shows people the difference between the two types of media when they are next to one another. It also lets users search through photos. In its case, Samsung says Apple's infringed on that patent with the camera roll, where images and videos taken on the device end up. 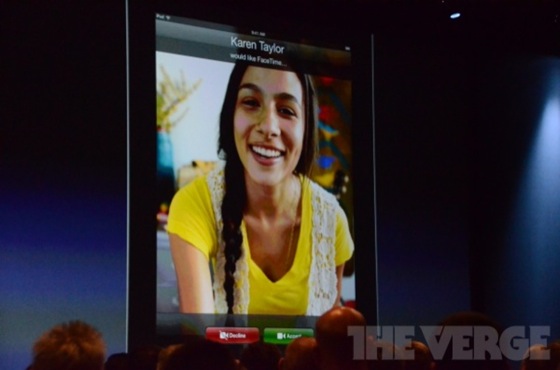 For both, Samsung is asking for $6.9 million in damages, with the overwhelming majority of that coming from the patent covering video. Samsung is asking for $6.78 million for the video patent, and just $158,400 for the image gallery patent. More than $3 million of the total figure comes from the iPhone 5, with the iPhone 4S and iPhone 4 trailing close behind according to court documents seen by The Verge.

Samsung called on Brigham Young professor Dr. James Kearl to come up with the $6.9 million figure. Kearl said he determined FaceTime damages by multiplying the number of infringing devices by how often the feature it was used, multiplied again by the 99 cents Apple was charging for the standalone FaceTime feature through the Mac App Store. That figure was then multiplied by a "relative value," and a hypothetical negotiation between the two companies, math that was kept confidential from the public here in court. It was slightly different arithmetic for the gallery features, Kearl said, noting that there were non-infringing alternatives like the stacks of photos Apple was to show users photos they had stored on the iPad.

Designed by Apple in California?

According to Apple's attorneys, Samsung bought the pair of patents specifically for the case, instead of inventing them in-house. The original inventors on the video patent, for instance, originated in Oklahoma, and the gallery patent originally belonged to Hitachi. In the case of the video patent, Samsung disclosed that it paid $2.39 million to acquire it in 2010, the same year FaceTime debuted alongside the iPhone 4. Apple hopes that will stand in stark contrast with its five patents, two of which were filed the day the company introduced the iPhone, and all developed within the company.

Samsung bought its patent the same year as FaceTime

To prove that point, Apple called upon Roberto Garcia, one of its employees who worked on the FaceTime protocol, and described it as a wholly original invention. In testimony, Garcia said FaceTime (which was internally codenamed "Venice") had been a natural evolution from voice technologies he and others at the company were working on as part of an API for developers to use in games, and was the result of "tens of thousands of lines of code."

"I was expanding voice chat to have multiple people, you and all your friends ... talk to each other," Garcia said. "I was working on that piece for Game Center. A lot of that code became the FaceTime product."

Apple also called on Jim Storer, a professor of computer science at Brandeis University, to help defend its photo gallery feature. Storer made the argument that the list of albums depicted in Samsung's patent looked nothing like Apple's "two-dimensional" array of icons, nor do they function the same way. The key difference, he said, is that you can tap on the photo or video you want to view, whereas the feature shown in the patent's diagram was an "old fashioned" list.

"This is an entirely different approach."

"This is an entirely different approach than the one taken by this patent," Storer said. "It's using technology that isn't available at that time."

This is the last week of evidence in the month-long trial between the two companies. For the rest of the week, Apple's rebutting Samsung's claims. Beginning next Monday, each company gets two hours to make its closing arguments before the jury begins its deliberations. It's not just a chance to sum up the claims that have been made over the last several weeks, but potentially sway the eight-person jury who will ultimately decide whether these dollar figures go from courtroom slides to real bills.