Agreement means Google will back Samsung in spat with Apple

Agreement means Google will back Samsung in spat with Apple

That agreement is designed to let Samsung offer Android some of Google's software out of the box, but there are strings attached. And as Apple aims to point out, it also means that there's some protection involved if Samsung were to be sued.

In a taped deposition, Google's patent counsel James Maccoun read over parts of the agreement, as well as emails between Samsung and Google officials noting that Google would back company specifically over two patents relating to universal search. The deposition did not disclose concrete financial, or strategic details of what kind of compensation Google would offer. Nor did it mention whether other patents in this case were a part of that agreement. Instead, Maccoun said simply that the agreement was created for Google to provide a number of its applications to Samsung, and provide backup in the event of a legal issue.

"So as I read it, Google's essentially offering to defend Samsung to the MADA and does offer to defend some [patent] claims," Maccoun said.

The two mentioned in Maccoun's deposition are Apple's US Patent Nos. 6,847,959 and 8,086,604, only one of which is still at play in the lawsuit between the two companies. The '959 patent (which is still in in the suit) covers searching local information and the web at the same time, while the '604 patent covers searching multiple areas of information through a single interface. Google is also supporting Samsung against Apple's US Patent No. 7,761,414, which covers background synchronization (see the full list and explanation of the patents in this trial here). 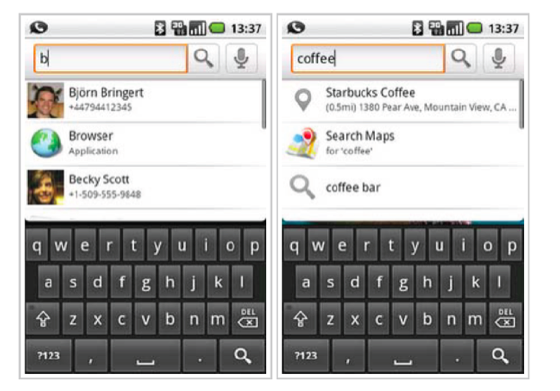 Apple's taken aim at several Samsung devices in this case for the Google search box, saying the feature infringes on one of its own patents that lets users search both locally on their devices and on the web. It's also targeted Samsung for infringing on four of its other patents in more than 37 million devices sold since 2011, and wants $2.191 billion in damages as a result. Despite that, Google is not named as a defendant, something Apple's lawyers have been keen to point out.

Google's name is not on the lawsuit

Even though its name is not on the lawsuit, a number of Google employees have appeared for testimony as part of the case. That includes Hiroshi Lockheimer, the company's current VP of engineering for Android. Lockheimer took to the stand earlier this month to describe the beginnings of the Android program, and back up Samsung's claims that background synchronization (one of the things Apple's suing over) was part of the original Android specifications. Samsung also brought up Diane Hackborn, a principle software engineer on Android, to convince the jury that the functionality described in Apple's "quick links" patent was a "core" part of Android.

Google's made these MADA agreements with other hardware manufacturers, though many of the details have remained a secret. That changed this past February, with a 2012 copy of the agreement surfacing as part of the legal spat between Google and Oracle.