"Snapchat for business" was a joke that was always bound to become reality. It's not just texting-crazy teenagers who benefit from avoiding a paper trail — grown adults already go to great lengths not to put things in writing. The fact that we respond to texts and emails by saying "call me" reflects our anxiety over having our words come back to haunt us. And that could be a business opportunity.

At least, that's what the team behind Confide thinks. What LinkedIn is to Facebook, Confide aspires to be to Snapchat — a grown-up, professional alternative for business users. It allows you to send text messages to your contacts that disappear after being read, with end-to-end encryption and some clever design touches designed to thwart screenshots. And as of today, it's officially a cross-platform messenger: Confide is now available on Android, 100 days after it debuted on iOS. And it includes some platform-specific features likely to make iPhone users jealous.

Confide isn't the first app to embrace self-destructing messages in the workplace. TigerText, which was founded in 2010, offers paid self-destructing messaging and markets itself to healthcare professionals and other businesses whose communications are strictly regulated. More recently, Peek arrived in December with another take on messages you read only once.

But Confide stands out for the way its design marries a beautiful interface with practical considerations for keeping your messages secure. Messages appear on your screen only when you swipe over them, and even then they appear only one or two words at a time. If someone takes a screenshot, the app alerts you — but given the way messages appear, a screenshot would only grab a few characters of the message. And after you close the message, the little gray bricks obscuring your message fall away like you're playing a game of Brick Breaker. There's no going back — the message is gone forever. 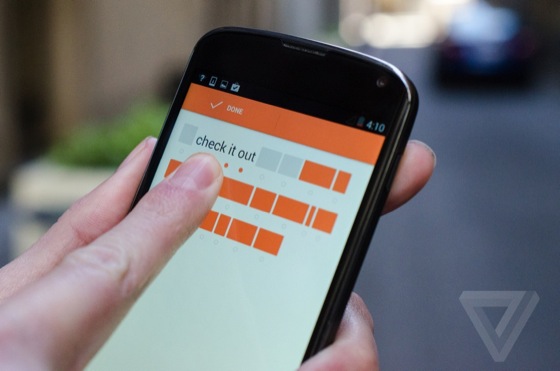 The Android app is largely identical to its cousin on iOS, but there are some key differences. Most prominently, Confide integrates with Android email so that you can share an email without worrying the recipient will forward it to someone else. Highlight some text in an email, and you'll see an option to share it through Confide. Founders Howard Lerman and Jon Brod say that kind of system-level integration points to what their product will ultimately become. "Any surface that a professional uses in their daily life, we want to bake Confide into that thread," says Brod. "What if you could Confide a document? Anything on desktop? We're not just a mobile messaging app — we consider ourselves a core service."

For now, it's a core service without revenue. The company, which raised $1.9 million in February, says its free app will eventually charge for additional services. For now, its major challenge is growth — there are already a glut of messaging apps in the marketplace, and persuading millions of users to download yet another one is going to be an uphill battle. But enough people have suffered from one of their private messages being exposed to make Confide worth at least a look. In an era defined by fears over surveillance and data theft, a message that disappears seems more valuable than ever.