Designed for the future: Leica's new camera borrows from Audi and Apple

Leica is best known for being a traditionalist camera company. It took years for it to release a digital version of its revered M rangefinder, and it's one of the few camera companies left that still produces film cameras, the designs of which have gone largely unchanged for 60 years. But today Leica is launching a new line of cameras that are exceptionally modern, from their design to their technology. The Leica T is the company’s first line of mirrorless, non-rangefinder cameras, with a completely new industrial design and an all-new lens mount.

Leica partnered with Audi’s design team to come up with the T’s stark, modern look. (This isn't the first time the German companies have joined forces: Audi was responsible for 2013’s Leica C point and shoot and the stunning, limited-edition titanium M9 from 2010.) It’s the first interchangeable lens camera to have a true unibody aluminum frame, which Leica machines out of a single block of metal. It’s not unlike Apple’s manufacturing process for the MacBook, though the Leica T is being manufactured in a brand-new factory in Wetzlar, Germany built specifically for it. (And in true, hand-built Leica fashion, each T chassis is subjected to 45 minutes of polishing by a skilled Leica employee before the electronics are added to it. By hand, of course.) 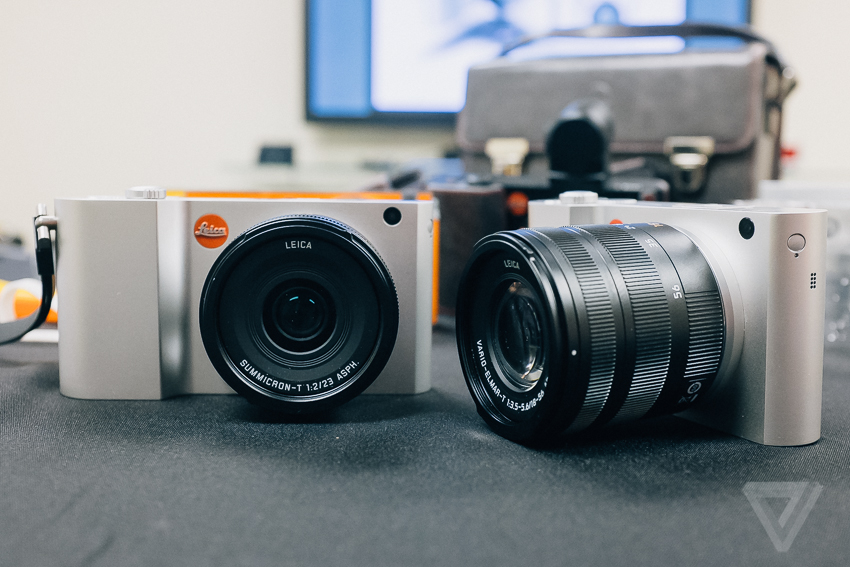 The T features a unique lug attachment system for straps and other accessories, and it has a pop-up flash that seamlessly hides into the camera’s chassis. It’s all very modern and offers more than a passing resemblance to the one-off Leica M auctioned off late last year that was designed by Apple’s Jonathan Ive and Marc Newson. The T is very solid and the cold touch of the aluminum feels great in your hand, though it’s a much different experience than one gets from a traditional Leica rangefinder.

Aside from its clean lines and all-metal construction, the other thing that separates the T from the rest of Leica’s lineup is its lack of buttons and physical controls. There are two thumb dials, a shutter key surrounded by a power toggle, and a movie-recording key on the top of the camera. Everything else is handled by the T’s 3.7-inch 854 x 480-pixel touchscreen panel. The only viewfinder option is an external EVF, and unlike Leica’s rangefinders, the T has autofocus and comes with built-in Wi-Fi, which pairs to Leica’s new iOS app for remote control and image transfers.

Inside, the T has a 16-megapixel, APS-C size CMOS image sensor built by Sony and 16GB of internal storage to go along with its SD card support. It lacks an anti-aliasing filter and can shoot at ISOs up to 12,800. For video, the T records 1080p video at 30 frames per second and records stereo sound. Leica says the rechargeable battery is good for about 400 pictures between charges, which compares favorably to other mirrorless cameras. 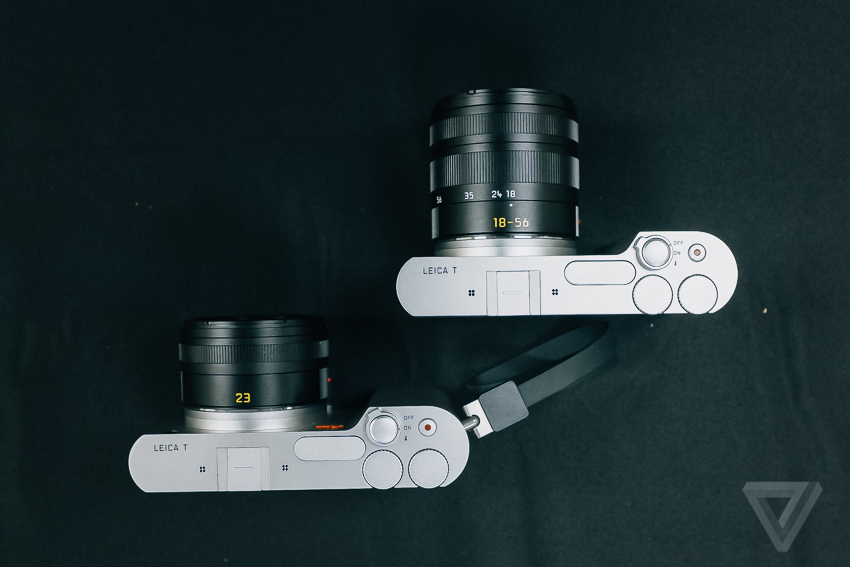 The new lens mount is a Leica-specific design and supports two lenses at launch: an 18-56mm (28-85mm in 35mm equivalent) f/3.5-5.6 Vario-Elmar zoom and a 23mm (35mm in 35mm equivalent) f/2 Summicron prime lens. Leica says that a 17-35mm equivalent wide-angle zoom and 80-200mm equivalent telephoto zoom are on the roadmap for the T. Though the T itself is made in Germany, its lenses are made in Japan to, quote, "Leica specifications." In the few minutes I spent with the new T system, there was a noticeable difference in feel and quality between the T body and the mismatched lenses that pair with it, but they are made of metal and have a level of heft lesser lenses lack. Leica is also making an M-mount adapter for the T, so virtually any Leica rangefinder lens from the last 60 years can be used with it. (Recent lenses that have Leica’s six-bit coding system will pass exposure information to the T, but all M lenses remain manual focus and manual exposure when mounted to the new camera.)

Leica’s decision to forgo lots of physical buttons and switches and condense the T’s controls into its touchscreen is a bit surprising, but the system seems to be thoughtfully designed and functioned well in the brief time I spent with it. The interface offers big, smartphone-like icons for switching settings, and it makes use of swipe gestures and pinch-zooming when viewing photos. The T’s system will never really replace the tactile feel you get from manual controls and switches, but Leica is confident that even longtime rangefinder shooters will adapt to it quickly.

The Leica T will be available worldwide in silver on May 26th for about $1,850. (A black model is planned for launch later this year.) Its lenses are expected to sell for $1,800 (zoom) and $1,900 (prime), as well. Those prices aren’t nearly as high as the company’s M line retails for (the M currently sells for almost $7,000 just for the body), but there’s no mistaking that the T is not a run-of-the-mill camera for casual snap-shooters. Despite the price, Leica is expecting a lot of demand for the T (hence the new factory), and it will support the new system with a host of accessories, ranging from leather holster cases to colorful wrist straps and snap-on covers.

Leica doesn’t launch new cameras often — the last time it refreshed its flagship M was in 2012 — so an entire new line is a pretty big deal for the company. The T represents the next Leica, the Leica that will have to continue building cameras and a expanding its loyal fan base for the next hundred years. While it’s a markedly different camera than what Leica is traditionally known for, the T still holds on to the company’s values of build quality, image quality, and of course, exclusivity. It’s just slightly less exclusive than before.