More than a social network: Facebook aims to be the source for breaking news

Share All sharing options for: More than a social network: Facebook aims to be the source for breaking news

Facebook has always been filled with "news," just not the kind you’d find in a daily newspaper.

Recently, however, Facebook had made several moves to shift the content of your News Feed towards hard news — towards providing the RSS-like news experience people never knew they wanted. Facebook started with juicing the popularity of breaking stories by its favorite publishers inside the News Feed and Paper, its news app, but today, the company is taking its news efforts one step further. Facebook is announcing Newswire, an official Facebook page you can follow that aggregates the best original content posted on the site. If you’d like, you can even follow the channel on Twitter — which is precisely the service Newswire seems designed to compete with. 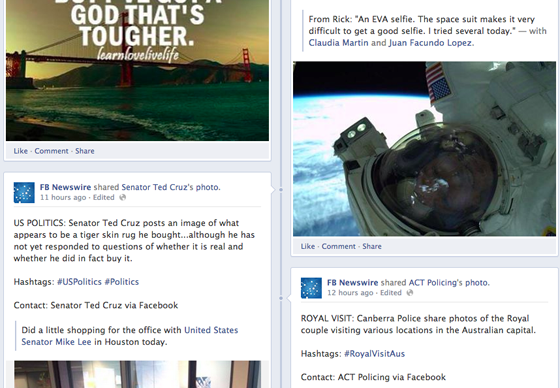 Newswire is positioned as a tool for journalists looking for primary sources about current events, but could also be useful to the average Facebook user. Newswire will be publisher-agnostic, so following it will yield popular stories posted to Facebook by users and groups like Ellen DeGeneres, Kobe Bryant, Ukraine's interior minister, or any citizen journalist posting a public status update or photo. These stories will show up in your News Feed as stories shared by Facebook Newswire, or you can visit the Page directly to see them.

Newswire is like Facebook’s own Breaking News profile, Reddit front page, or Twitter Discover page. But in the absence of a "front page" of its own — like Reddit’s, where the best content bubbles up naturally — Newswire aims to highlight what you might have missed. Building out Newswire as a page you have to follow will likely hinder its growth, however. Facebook has created a glorified page staffed by news editors, not a one-stop shop for breaking news. Newswire won’t delineate between categories like Entertainment, Sports, or Politics, and will only display posts chronologically like every other Facebook page. On the other hand, you could imagine a News tab in Facebook’s left navigation bar filled with all the best public content shared on Facebook, with a sidebar listing news sections.

"It’s all about thinking of Facebook as a primary source of news content, formatted so journalists can easily scan content and pick out what’s newsworthy," says Andy Mitchell, director of news and global media partnerships at Facebook. "But it’s not just for news breaking," says Mitchell. "I would also look at it as complementary content to big stories of the day." Mitchell says that Newswire aims to highlight content posted exclusively to Facebook. Facebook recently launched an embedded posts feature — and now Facebook is showing journalists and users exactly what to embed in the stories they’ve already written.

In order to find trending stories, Facebook partnered with Storyful, a social news aggregation company with access to the massive number of public posts being shared on Facebook each day. "The social web is incredibly noisy — when you look at Facebook alone, something like 684,000 pieces of content posted every minute," says Storyful managing editor Áine Kerr. "We bring in Storyful’s ability to find news from that incredible volume of content, find it, verify it, and curate it into one manageable place." Ordinary Facebook users, in comparison, can’t even search for "Ukraine" and see popular results like they might on Twitter.

Storyful is an expert in the news space, employing its own group of journalists to track down and verify the stories its algorithms pop up, but Facebook’s partnership with the company seems to indicate that its own search and analytics tools could use some work. Twitter recently acquired a social data analytics company of its own, and perhaps Facebook will eventually do the same. Facebook wouldn’t comment on the exact terms of the agreement with Storyful.

Newswire is aimed squarely at Twitter, but Facebook’s real battle will be to convince content producers like reporters, celebrities, and citizen journalists to post their stories on Facebook instead of Twitter. Facebook has been waging this battle for some time now, and has had some success. One post by Kobe Bryant, for example, made headlines in the sports world and yielded 440,000 Likes and 88,000 Shares. If you needed any proof that fans care more about what they find versus where they find it, that’s one good indicator. If Newswire can directly or indirectly help grow traffic to these sources, they might be more likely to post their next scoop on Facebook instead of Twitter.