Over 3 million children in total

Share All sharing options for: American kids are more likely to be medicated for behavioral problems if they're in poor or military families

An estimated 7.5 percent of American children age 6-17 were prescribed drugs to treat behavioral and emotional difficulties in 2011, according to a CDC report published today. That estimate is equivalent to roughly 3.2 million children. Furthermore, the CDC reports that nearly 8 percent of children whose parents are members of the US military and 9.2 percent of children from families with incomes below the poverty line take prescription drugs for these same problems.

"difficulties with emotions, concentration behavior, and being able to get along with others."

Unfortunately, the report does not state what these medications are. "The survey doesn't ask questions on specific types of medications, so we don't know the types that they are using," says LaJeana Howie, a CDC statistician who worked on the report. The survey defined behavioral and emotional difficulties as "difficulties with emotions, concentration behavior, and being able to get along with others," Howie explains. It's therefore likely that drugs that are used to treat ADHD, anxiety, and depression represent a large percentage of these medications.

The study also makes it difficult to determine whether the overall percentage of children on prescription drugs is higher, lower, or equivalent to previous estimates, because the last such report — a 2005 study that estimate that 5 percent of kids were taking prescription drugs for these same problems — also included four- to five-year-olds. This change in age brackets, Howie says, means that "we don't have a direct data comparison for previous years."

But Christopher Bellonci, a child psychiatrist at Tufts University who did not participate in the CDC study, argues that "the trend is that the older kids are on more medication, so you would expect that there would be a lower prescribing rate in the four- to five-years-olds." Taking these younger children into account might therefore lower the overall percentage. But given that the diagnostic rates for these conditions have been increasing in recent years, Bellonci says, it might not bring the overall percentage down to the previous 5 percent. 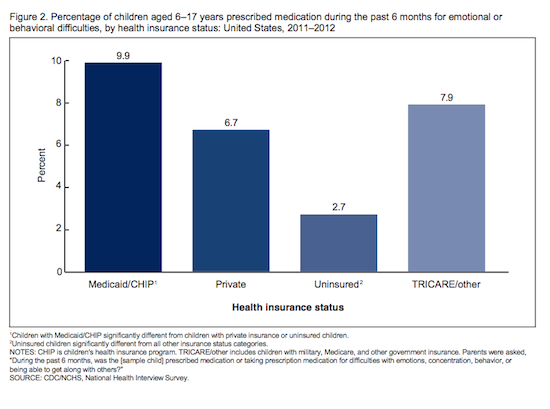 The report also raises questions about children of military service members. According to the survey, nearly 8 percent of children on military healthcare, called Tricare, took prescription medications for behavioral difficulties in 2011. "The military insurance — that's a pretty high rate," Bellonci says. "There is growing concern about the impact of two wars, extended deployment, and now trying to incorporate people who were in war zones back into society." These parents carry a significant burden of trauma, Bellonci says, "and this has an impact on their children."  Bellonci's claims are backed by numerous studies that have reported that children whose parents are in the military face increased risk for a number of emotional and behavioral difficulties, including those that can lead to suicide.

Parental satisfaction with the medications was included in the survey as well. "We found that over 50 percent of the parents perceived that this medication was helping a lot," Howie said, "I think that's good news." But William Graf, a pediatric neurologist at Yale University who did not participate in the survey, sees things differently. Looking at the results for children below the poverty line, Graf pointed out in an email to The Verge that only 43 percent of parents said they thought the drugs were helping their kids. So, if parents are the best judge of their children, and their satisfaction with the treatment implies that the medication is effective and the diagnosis is accurate, he said, "then these data would suggest over-diagnosis and medication overuse in low-income children and adolescents compared to higher income populations." 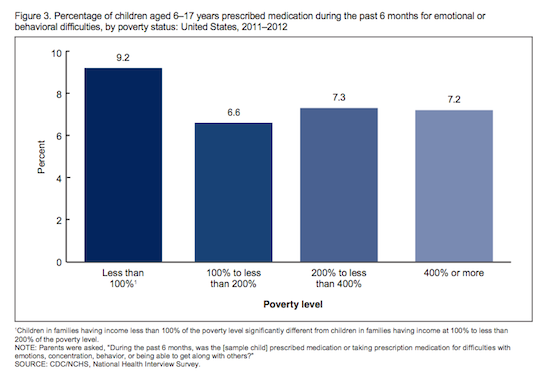 "medications are being prescribed in lieu of other social interventions."

"It not just overprescribing though, it's also under-treating," explains Bellonci, "because you have kids where medications are being prescribed in lieu of other social interventions" or non-medicinal treatments, he says, such as therapy. When asked about this interpretation of the results, Howie answered that based on the information in the report, she could not "speculate on that."

Despite the numerous questions that this report leaves unanswered, researchers are pleased that the CDC has updated the data on pediatric prescription rates for behavioral and emotional difficulties. "I do a lot of presentations on psychotropic medications, particularly for children in the child welfare system, and I'm still having to quote a study from 2002," Bellonci said. "I was really pleased to see somebody updating the general population prescribing rates." To obtain these results, CDC researchers surveyed close to 17,000 children and their parents. "One of the great things about this study," Howie says, "is that you really can say that this study is nationally representative."