The history of Microsoft's new Outlook for iPhone app

The history of Microsoft's new Outlook for iPhone app

Less than two months after acquiring Acompli, Microsoft is releasing an Outlook for iOS app today. Microsoft's new app is simply a rebrand of Acompli's existing app, but the company is promising new features in the future. Read our original report below on how Acompli, and ultimately Outlook for iPhone, came to be.

For all the advances the smartphone has brought us, our email is still largely chained to the desktop. Stock email apps have never had half the features of their desktop counterparts, and they’re all but useless when it comes to scheduling meetings or finding your files. They were built under the assumption that you would rarely want to do more than check your messages and send the occasional reply while on the go, saving the real work for when you were in front of a larger screen and physical keyboard. And in the early days, that assumption was right.

But since the dawn of the App Store, developers have been trying to break email free of the desktop. Last year the stylish Mailbox arrived in the App Store, drawing cheers for the way it made inboxes easy to process even on a smaller screen. Swipe gestures made it fun to archive messages by the dozens, and a lightning-fast infrastructure made sending messages feel as fast as texting. Nearly 400,000 people signed up to use the app before it was even available. A month after launch, Mailbox was acquired by Dropbox, and its team has continued to build features aimed at making the unending burden of email more bearable.

But over the past month, a new buzz has emerged from some of the same early adopters who first fell for Mailbox. They're saying that Acompli, a new free email app launching today on iPhone, represents the next step in unchaining email from the desktop. It’s a professional-grade email solution with a host of features that should appeal to office workers: Microsoft Exchange support on day one, one-tap integration with your calendar, and a dead-simple way of accessing recently emailed files and people. In short: it’s the Outlook for iPhone that Microsoft hasn’t yet built.

Javier Soltero didn’t start off wanting to do email. A former chief technology officer at VMware, he quit at the end of 2012 to become an entrepreneur in residence at Redpoint Ventures. Like many developers, he hoped to create an app his users would return to every day. Satish Dharmaraj, a partner at Redpoint, encouraged him to think about email. Soltero says he was skeptical at first — another email app? But the more he researched it, the more discontent he found with mobile email — particularly from people whose offices use Exchange servers.

When it comes to alternative email clients for their mobile devices, Exchange users have been underserved. Silicon Valley, where many email apps are built, tends to view Exchange users with derision, Soltero says. (You still can’t add an Exchange account on Mailbox, for example.) "People here do not fathom the possibility of anyone using Exchange," he says. "Next thing you know you’ll be wearing sweatpants and a fanny pack! But we know, because we looked at the data, that there are close to 800 million Exchange inboxes out here. And curiously enough, it continues to grow at a 6 percent clip. Exchange is planet Earth’s preferred email delivery system. And that’s perfectly fine!" (Acompli also supports Google accounts.) 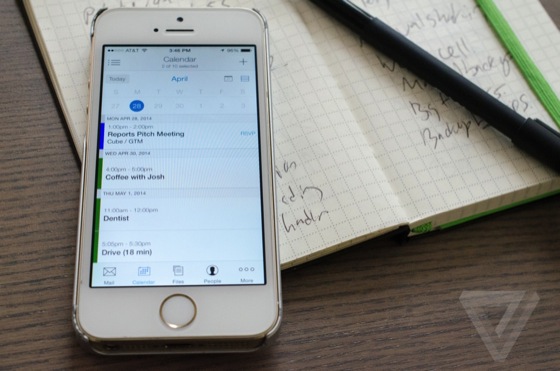 With stock apps limited largely to sending and receiving messages, Soltero saw a business opportunity. Acompli helps you avoid desktop email in two ways, both of which get their own tab at the bottom of the inbox. First, an integrated calendar lets you scan upcoming appointments and set meetings without ever leaving your email app. The calendar also appears in the message-compose window, and tapping it will pull up two options: you can either send your availability, highlighting times with a couple taps, or create a calendar invitation for a specific time. All of it can be done in seconds, with your thumb, while you’re eating a salad.

Acompli’s second move away from the desktop lies in its approach to files. A significant number of the files we need for work are already sitting on our email servers, but good luck finding them with a stock email app. Acompli puts your recent files in a tab, letting you scroll through them quickly and attach them to messages with one tap. It takes a similar approach to your contacts: instead of making you look them up in a separate app, it has a people tab that keeps a rolling list of your recent contacts. In effect, it’s a dynamically generated list of your most important contacts, and when it works it’s great. (Unfortunately, it considers marketing emails from e-commerce sites and social media to be "contacts," and includes them in the people tab, making it less useful.)

Setting up meetings with a couple of taps

Taken together, Acompli’s design encourages you to start thinking of your iPhone as a workstation in its own right. There’s something highly satisfying about responding to an emailed request for a meeting with a couple of taps. No more switching between several apps and exchanging multiple emails to find a time that works — now you can do it in a single place. And anyone who emails lots of files will likely appreciate having them available at their fingertips.

After a month testing Acompli, I’m still not sure it’s the email app for me. I do three things with mobile email, and three things only: check for crises, fire off quick replies, and aggressively archive anything that doesn’t need a response. Mailbox’s big buttons and ridiculous speed make it ideal for my needs. But there are almost as many ways to do email as there are people receiving it, and my hunch is that a good chunk of them will see Acompli as the email app they've been waiting for. For those who use complex labeling schemes and filters, mobile email is still a long way from replicating the best desktop experiences. But it’s finally starting to catch up.