MIT algorithm predicts how popular your Instagram photo will be

MIT algorithm predicts how popular your Instagram photo will be

If you want more Instagram likes, don't take photos of spatulas, golf carts, or space heaters. That's a bit of advice from Aditya Khosla, a PhD candidate at MIT's prestigious Computer Science and Artificial Intelligence Lab. Khosla, who previously came up with an algorithm to help actors tweak their headshots to make them more memorable, has crunched through 2.3 million Flickr photos in order to isolate the factors that make a photo popular.

Khosla says his algorithm allows him to predict how many views your photo will get before you even upload it. The algorithm considers social factors such as how many followers a user has, the number of tags on the photo, and the length of the title. It also measures content factors such as texture, color, gradient, and objects present in the photo. (Miniskirts, bright colors, people instead of scenery = good. Plungers = bad. Pink and yellow miniskirts, even better. Green plungers, horrible.) 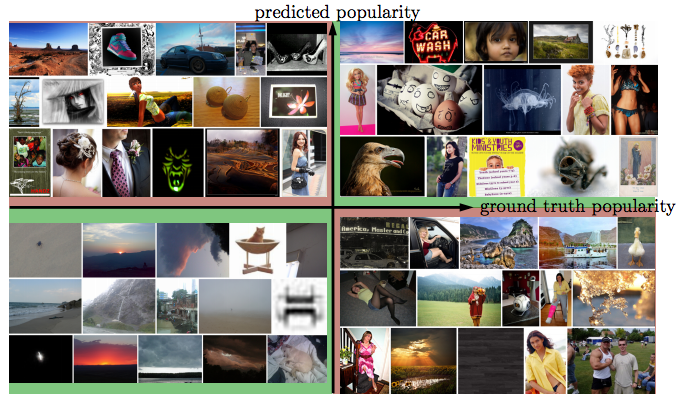 You can assess your unpublished photos using a rudimentary tool on Khosla's website that measures the potential popularity on a relative scale from one to 10. "It actually represents how many views are expected on your image per day, on average, but in a log scale," Khosla tells The Verge. "What this means: if the score is 5, we expect roughly 2^5 = 32 views on your image per day, or if its 6, roughly 2^6 = 64. However, this metric is not entirely accurate, and the most important thing is the relative score i.e. if A has score higher than B, it's likely to receive more views."

Right now the algorithm is much better when social factors are included, but Khosla hopes to improve it. He also plans to create a tool that can automatically edit your photo to make it more popular.