Apple and Samsung got their last chance to get testimony in, just days before a jury will begin deciding a case where billions of dollars potentially hang in the balance. The evidence portion of the month-long trial between the two companies wrapped up today with just a single witness from each company. As soon as Monday next week, both sides then present their final arguments, which will be one last time to try and sway the jury. One wrinkle in that plan: a new decision from a Federal Appeals court in a related case between Apple and Motorola that could mean more testimony.

On the docket today were just two witnesses: University of Canterbury professor Andrew Cockburn for Apple, and MIT professor Martin Rinard for Samsung. Both are experts in computer science, and were called upon earlier in the trial to discuss the validity of key patents in the case.

Cockburn spent his brief testimony both targeting Samsung for infringement, as well as thwarting off its effort to invalidate Apple's patents. Citing a Samsung internal document for a phone codenamed "Victory" dated May 2010, Cockburn reiterated claims Samsung had copied the specific way the slide-to-unlock feature worked. He also discussed Apple's autocorrect patent, attempting to show how it differed from a third-party patent on keyboards Samsung's using to suggest Apple's invention is not so novel.

Samsung's Rinard was brought up to discuss (once again) WAIS, server technology that Samsung's trying to use to prove that technology for searching for data both locally and on the internet existed years before Apple patented the feature.

In the lead-up to the close of the trial, both companies got 25 hours each to make their case, as well as defend against one another. The majority of that was spent on Apple's case, which accused 10 Samsung products (all but one of them smartphones) of infringing on five of its patents. Samsung's side was spent arguing that those five patents should be invalid based on prior inventions from other companies and inventors. Samsung then went after Apple with two of its own patents, one covering data compression, and another for arranging photos and videos into a gallery. In its own complaint, Samsung's targeted every phone, tablet, and iPod touch Apple released between 2010 to late-2012, asking for $6.9 million in damages. Apple, meanwhile, has asked for $2.191 billion.

Two factors that could change that large damages number is whether one of Apple's patents still ends up in play, as well as which devices get targeted for specific patents. Apple's ‘647 "quick links" patent — which highlights phone numbers, addresses, and other data — was involved in a separate case against Motorola. In a decision earlier today, the US Court of Appeals for the Federal Circuit noted issues between the scope of that patent between this court and the other. Judge Lucy Koh told both sides they'd get additional time on Monday to clarify that to the jury before wrapping up. The two companies are also at odds over whether four Samsung devices are infringing on four of Apple's five patents, something that still needs to be decided ahead of next week. 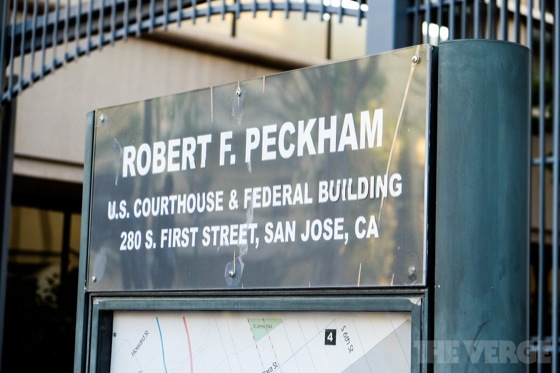 Judge Koh urged caution to both sides, though especially Apple following the Appeals decision, saying she didn't want the issue fail a closer review after the jury had made its decision.

It's up to a jury of eight to decide which devices infringed, and didn't, as well as how much to award each side. In a similar trial between the two companies two years ago, a jury sided almost entirely with Apple, awarding it $1.05 billion in damages in a case that involved far more products and patents. That figure was later trimmed to $939.8 million after the judge pointed out errors in the way the jury did its math.

The closing arguments next week present a chance for both companies to wrap up the 50 combined hours of testimony and evidence into a tidy, compelling package that will be easy for normal humans to understand. The jury, which took a full day to assemble earlier this month, consists of a diverse group of eight people, trimmed down from an original 10, two of whom dropped out in the very first day of the trial, citing personal illness and financial hardship, respectively. Among those that remain are a former IBM manager, police officer, and executive assistant, alongside accounting and store clerks.