Spec Sheet: OnePlus' One smartphone shows what hardware startups are capable of

Share All sharing options for: Spec Sheet: OnePlus' One smartphone shows what hardware startups are capable of

Do you have to be an established manufacturer to make a great smartphone? A number of small brands are starting to make big bets that you don't, and they've been turning out some interesting new devices to prove it, often with unlocked prices that well undercut the competition too. That movement got a big boost this week from OnePlus with the reveal of its first smartphone, the One. We're taking a close look at its specs to see how they compare to the devices it's facing off with. 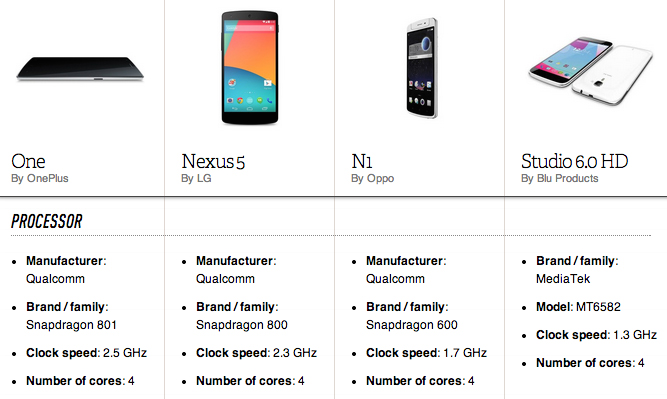 Click above for full specs on all four phones.

Impressive specs at any price

The One — not to be confused with HTC's smartphone line of the same name — appears to be a surprisingly capable smartphone for $299. Inside it is one of Qualcomm's new Snapdragon 801 processors along with 3GB of RAM — both top of the line details. It's not an overly large or heavy smartphone for its size either, though that's assuming that you're OK with a big 5.5-inch display in the first place. It has a 1080p resolution too, so if that's what you're interested in, the phone has just about all of the basic specs you might ask for.

Google's Nexus 5 is the only particularly high-profile example of a lower-cost smartphone that can match the One on specs and get near it on price, selling for an impressively low $349. The Nexus 5's specs are basically a half step behind the One's, and seemingly only because it came out half a year earlier. In fact, perhaps the most interesting difference between the two is their software: while the Nexus 5 is of course using stock Android, the One runs CyanogenMod — a lightly modified version of Android with helpful tweaks and plenty of features for power users. It's an Android modification that you might actually like and that plenty of people have even sought out on their own.

That's part of what makes the Oppo N1 a really interesting competitor to the One as well. For starters, the N1 runs CyanogenMod — in fact, it was the first phone to ship with it. But more intriguingly, one of the people behind the effort to bring CyanogenMod to the N1, Oppo's then-VP Pete Lau, is the founder of OnePlus, making the One something of a spiritual successor to it, if not the phone that he's been really working to make.

The N1 has a larger display and a taller body, and it actually falls behind the One just a bit more than the Nexus 5 does on specs, with only a Snapdragon 600 processor on the inside — by no means bad, but not what's been shipping in recent high-end smartphones. There are also two other major sticking points: First, its price. At $599, it's double the cost of the One. And second, it doesn't include LTE, unlike the One.

Lack of LTE on unlocked phones is still an issue

That leaves a big difference for Oppo to explain. The N1 has a great build quality and some clever hardware features to help, including one that allows its primary camera to rotate 180 degrees so that it can face either forward or backward. OnePlus is promising some really interesting hardware features on the One too, giving it swappable backplates that will come in wood, kevlar, and denim. Even if those don't feel as good as the N1's rigid plastic body, it'll be hard to warrant spending so much on a phone with notably lesser internals. Of course, the One's body will still have to hold its own if it wants to stand out, and we haven't gotten a chance to see how it feels just yet.

OnePlus wasn't the only small manufacturer to reveal a new phone this week either: Blu Products did too, launching the Studio 6.0 HD for $250. Blu has a wide line of smartphones already — including some that pair up better with the One — but the 6.0 HD can give a good impression of what's available from a small smartphone maker at an even lower price. Blu's newest is distinctly midrange, with its hardware including a quad-core processor from MediaTek, 1GB of RAM, and 4GB of storage. It also doesn't include LTE. That said, it has a 6-inch, 1080p display, supports dual SIMs, and has a stylish body, so there's still something there to like.

More than anything, that goes to show just how impressive a $299 phone with high-end specs and LTE is. Google has shown that low-cost and capable smartphones are possible — the question has always been whether a company that relies primarily on hardware profits could get by with prices as low as Google's. We haven't put our hands on OnePlus' One yet, but it's shaping up to be a very impressive effort out the gate.

If you want to learn more about any of the products mentioned above, all of our information on them can be found through the database box located beneath the article. For more on cellphones and just about every product around, you can check out the full Verge Database right here.