Share All sharing options for: Apple and Samsung will go into overtime to address key patent issue in court

Apple and Samsung will get a little more time in court than originally planned, after a California judge said both sides should be able to present additional evidence clarifying the wording associated with one of Apple's patents.

Earlier in the day, the two companies concluded the evidence portion of the trial following approximately 50 hours of testimony and cross-examination that was spread across nearly four weeks. But shortly after court kicked off, the US Court of Appeals for the Federal Circuit issued a decision effectively reviving a separate case between Apple and Motorola that involved one of the patents in this case. As part of that decision, the Appeals court said that it did not agree with Apple's interpretation of the patent claims that were used in that case, something that's now spilled over to this trial.

"I think it is only fair to do a reopening of testimony."

Given that new information, US District Court Judge Lucy Koh said it was too late to go through and rehash much of the trial, which was all but over at that point. Instead, she offered to give both sides an additional hour each on Monday to point out the patent claim construction's nuances to a jury with two expert witnesses on the patent: Carnegie Mellon professor Todd Mowry, and Kevin Jeffay, a professor of computer science at the University of North Carolina.

"I think it is only fair to do a reopening of testimony," Koh told the two sides late Friday. 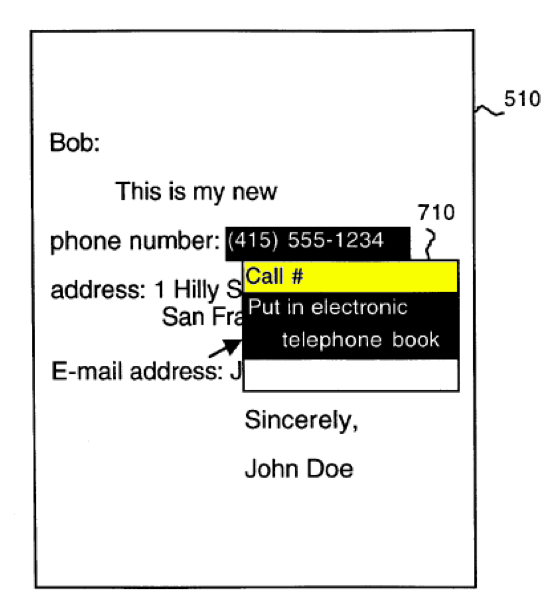 At issue could be millions of dollars in damages Apple believes it is due for alleged infringement on this particular patent. It's taken aim at 37 million phones and tablets Samsung sold in the US, saying they infringed on five of its patents, and is asking for $2.191 billion as a result. The patent in question is US Patent 5,946,647. It analyzes text for things like emails and phone numbers, and gives you contextual options when you tap them (see the figure from the patent above). Apple successfully used it on HTC before the two companies settled their legal spat, and it had taken aim at Motorola for it as well.

Both sides were originally scheduled to make their closing arguments on Monday, something that will now begin, in earnest, on Tuesday. Each company gets two hours to wrap the weeks of trial testimony and evidence into a concise and compelling package before an eight-person jury begins their deliberations.