Counterfeiting and adulteration is so rampant in the olive oil trade — one frequently cited study found as much as 69 percent of extra virgin olive oil in the US is substandard — that companies and distributors need a surefire way to verify the authenticity of product before it hits shelves. That's where new research from ETH Zürich comes in: chemists have found that they can dissolve synthetic DNA into oils to tag the product.

The DNA can be coded to reveal the producer and other key information about the oil, and with a technique detailed in a paper published earlier this year in American Chemical Society Nano, the double-helixes can be encased in a layer of silica to produce "synthetic fossils." These "fossils" protect the DNA from damage that could ruin the tag, and the researchers magnetized them with iron oxide so that they can easily be removed from the oil for testing. 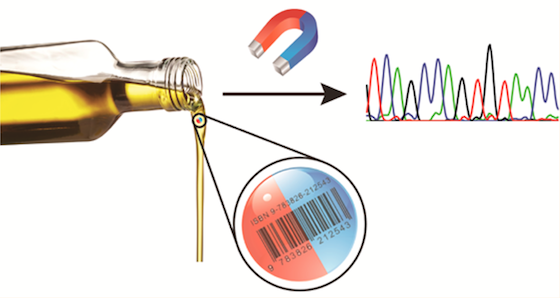 The primary benefit to this method is to make sure that products labeled extra virgin olive oil aren't just cheaper oils disguised with coloring and other chemicals to fool our senses. But the technique can also be used to check whether the oil's been adulterated. Olive oil fraudsters often cut expensive, difficult-to-produce extra virgin olive oil with cheaper oils, like soybean oil. Officials performing tests on olive oil would know exactly how much of the DNA should be in a sample, and if they found less they could safely conclude that the oil was adulterated.

In the paper, researchers say that the "synthetic fossils" would cost a maximum of 0.02 cents per liter, roughly equivalent to the cost of a traditional barcode. And in their testing, they found that the tags can sit in oil for at least two years before becoming damaged. The synthetic DNA also causes no change in the clarity or taste of the oil, according to the researchers, and it's safe to consume (though additional testing would have to be done before any product ships with the tags). Nevertheless, the prospect of making it easier to get high-quality  extra virgin olive oil onto tables is an appealing prospect for foodies — even if it means dissolving some synthetic DNA in the bottle.