A few months ago, this meeting would’ve taken place at a sprawling campus of anonymous office buildings in Libertyville, Illinois, about an hour’s drive north of Chicago.

But I’m in the heart of downtown Chicago at the Merchandise Mart, an imposing stone structure two city blocks long that has rested on the banks of the Chicago River for the better part of a century. Once owned by the Kennedy family, this architectural landmark is best known as the mecca of interior design: much of the building is occupied by cabinet makers, marble vendors, and flooring companies. It’s said the Sultan of Brunei furnished his entire palace here, because it was the only place where he could tick every box on this shopping list at once.

Motorola lives here now. The 40-mile move — an eternity in merciless Chicagoland traffic — poses both a logistical challenge and perhaps a bit of a culture shock for some of Motorola’s suburbanite staff. But it also represents just a sliver of the upheaval the company is going through this year.

Whether newly appointed president Rick Osterloh’s team can navigate the shifting targets that now lie before it is anyone’s guess: it’s no secret that companies not named Apple or Samsung have a hell of a time squeezing money from the brutal and fickle smartphone market. That dynamic alone precipitates enough stress, but Motorola is also in the midst of being traded from a comfortable home with Google to Chinese giant Lenovo, the biggest maker of PCs on the planet. And through all of this, it needs to keep delivering world-beating smartphones at a backbreaking pace without skipping a beat.

"We’re used to change," says Jim Wicks, Motorola’s senior vice president of design. He’s calm but energetic; this isn’t his first rodeo. "The last three or four years, there’s been a lot of change, and this has been another phase of it."

If there's concern over the future of the company, Wicks isn't showing it 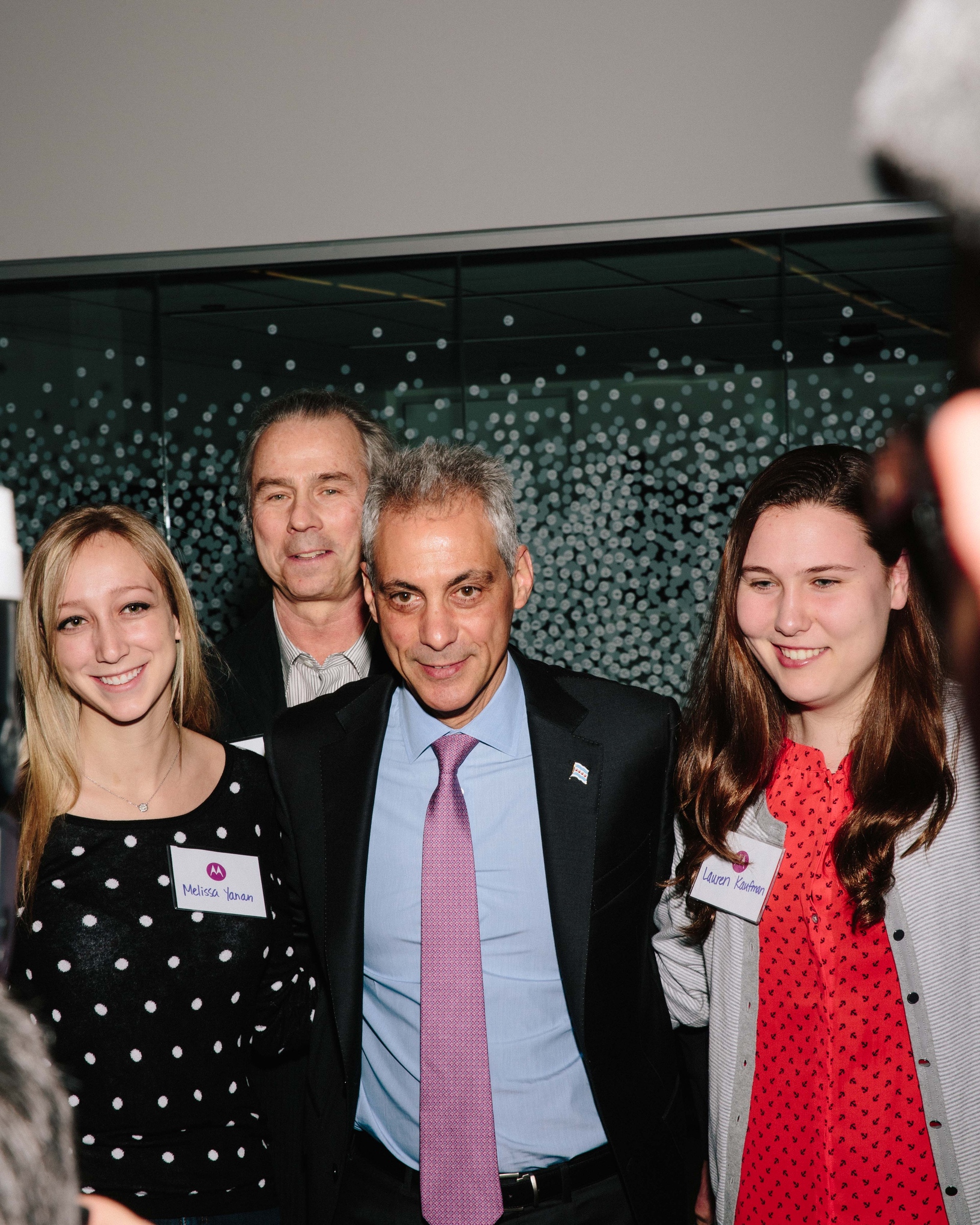 Indeed, Wicks — a designer at Sony in its golden years before joining Motorola in the early aughts — knows a thing or two about the high drama of upheaval. He’s weathered the rise (and fall) of the RAZR, the rise (and fall) of Windows Mobile, a multibillion-dollar corporate split, an acquisition, and now a second acquisition. "You know, change is good in so many ways. It gets you out of your comfort zone, has you challenge some things you typically wouldn’t. So the change actually is turning out to be quite good for us," he tells me.

His company’s new home is changing, too. In recent years, the Merchandise Mart has become the de facto nexus of Chicago’s burgeoning tech scene, serving as the home of 1871 — an enormous co-working space that’s garnered national attention with visits from Steve Ballmer and Ben Horowitz, among others. That partly explains why Google announced Motorola’s move from the suburbs to the city in 2012, just weeks after completing its acquisition: Osterloh and others inside Moto are quick to point out that they’ve partnered with 1871 on a number of initiatives. The symbiosis makes sense as boisterous Chicago Mayor Rahm Emanuel pushes to turn his town into a digital heavyweight, but at the time of the announcement, there were more pragmatic reasons as well; Google’s Chicago offices are just a few blocks away. And coming off rounds of layoffs in both 2012 and 2013, Motorola simply didn’t need the space that its suburban campus offered — a campus that the company had occupied through the heady RAZR days. The pre-iPhone days. The pre-Galaxy days.

Still, Wicks seems genuinely excited about the new digs; if there’s concern over the future of the company and its facilities under Lenovo’s ownership, he certainly isn’t showing it. "We're down here in the middle of the city, vibrant, a lot of people," he says. "Having everything here and re-laid out so that it works more effectively than it did before, and having the proximity to the engineering and design teams... it changes the speed with which we can communicate and make decisions." 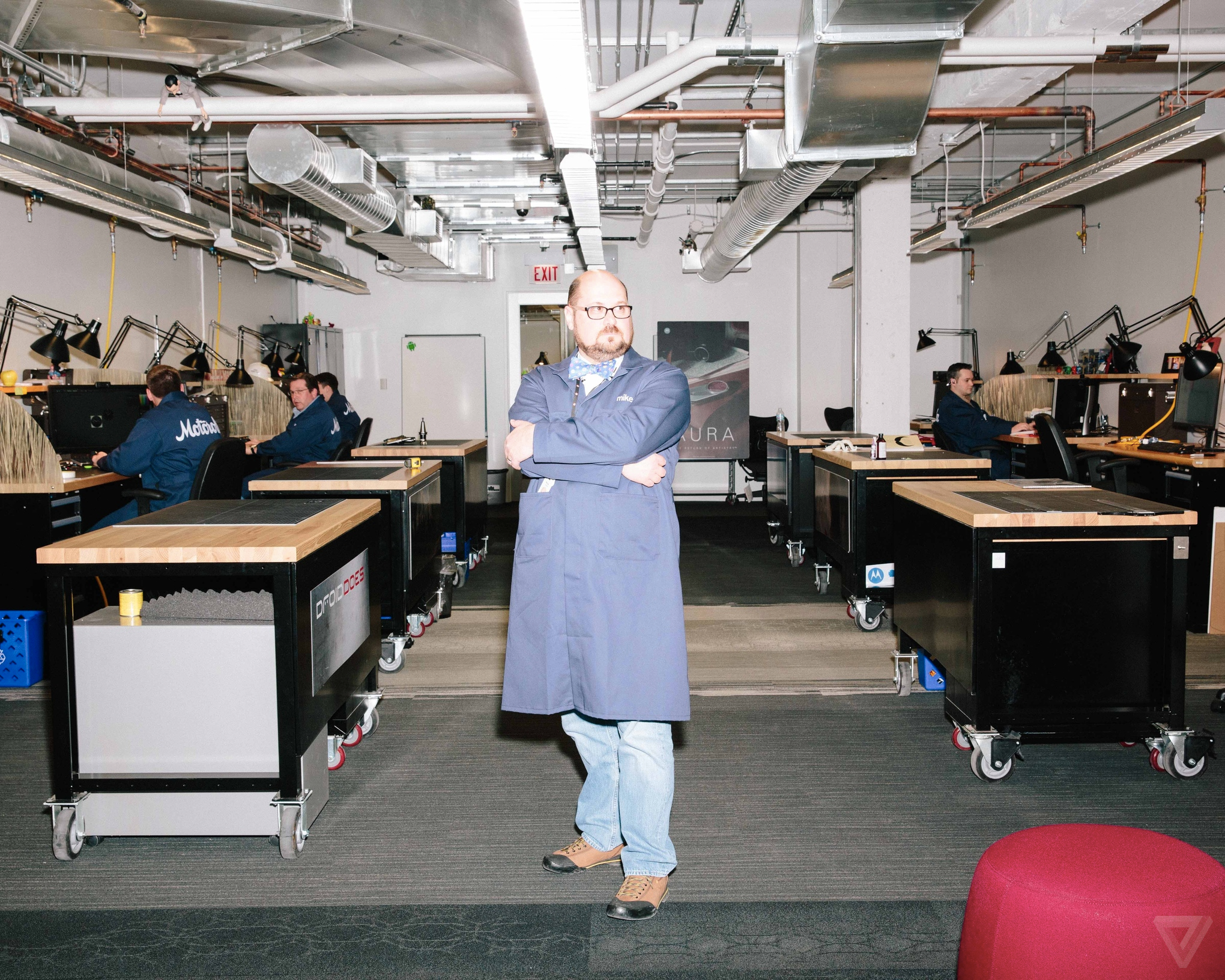 Employee Mike Jahnke stands at the entrance to his Consumer Experience Design (CXD) lab, an incubator for new designs — including the Moto 360 smartwatch.

Motorola’s architects — Gensler — have turned the upper floors of a building that was completed just as the Great Depression’s death grip took hold into a fun, modern, and beautiful place. It goes on forever: the sheer size of the Mart, each of its 18 stone-and-steel main floors, can’t be overstated. Every labyrinthian hallway leads to a room of employees who seem imbued with a sense of purpose (or at least have been told to look convincingly busy for the day of a media tour). In one direction, an enormous room with signal-proof windows houses engineers poring over camera components with microscopes. A few desks over, a staffer pops a circuit board into a shiny red case that could very well be a new smartphone model. Elsewhere, butt machines — my term, not Motorola’s — simulate the effect of sitting on a Moto X over and over and over again. A game room filled with TVs, arcade consoles, and basketball machines sits virtually empty. Everywhere, there’s an air of focus.

Everywhere, there's an air of focus 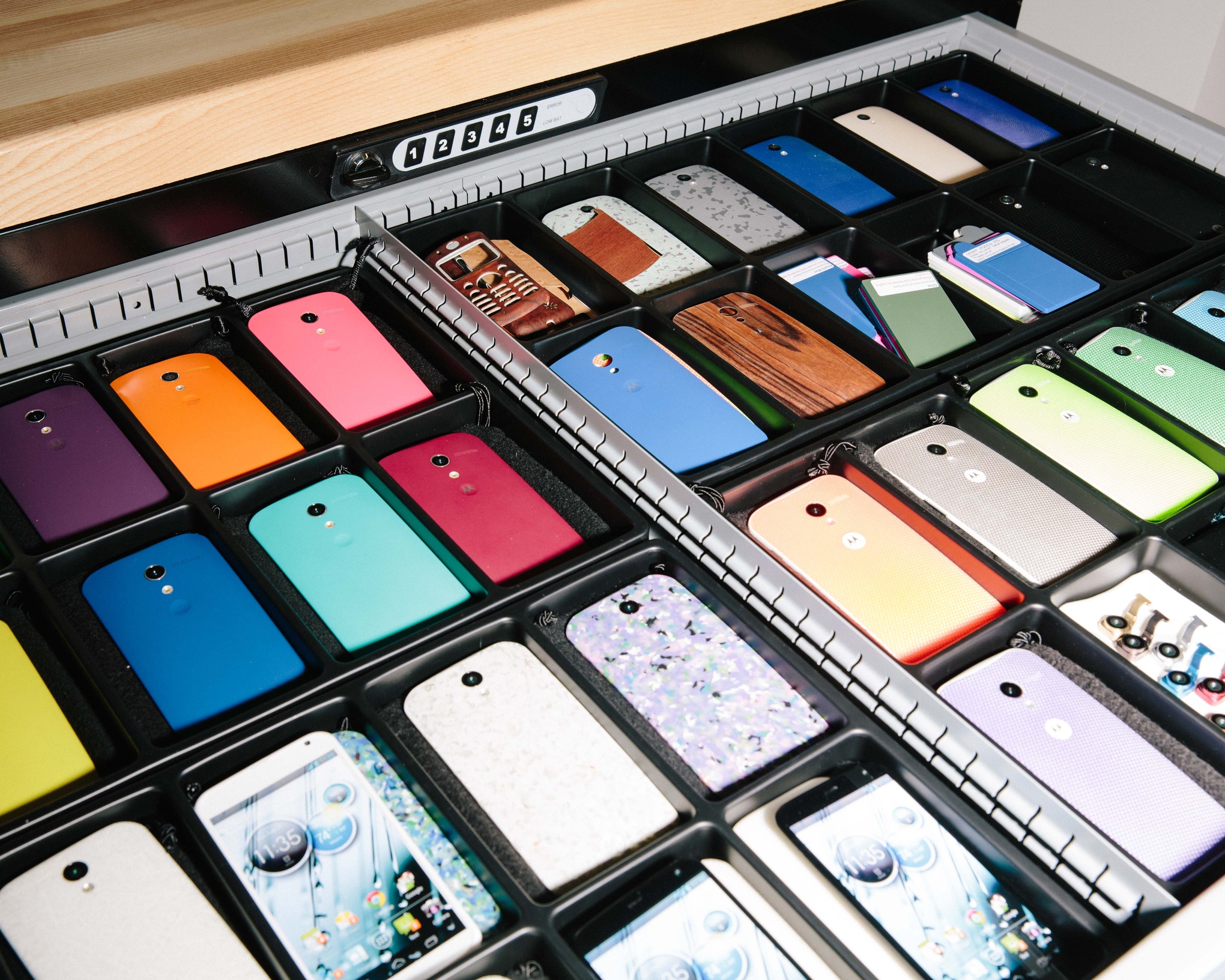 A drawer of prototyped Moto X designs; some have made it to production, others haven't.

Wicks and I are seated in the Consumer Experience Design (CXD) lab, a cozy space occupied by a handful of employees wearing navy blue labcoats with throwback Motorola logos from the late ’40s on their backs. Along one wall lies showcase after showcase of prototype phones that have been designed and assembled in the CXD. Some I recognize, others I don’t — unreleased design experiments that died on the vine. Next to the cases, a drawer opens to reveal dozens of unreleased Moto X case designs; my mind starts to wander, thinking about what Moto Maker — the company’s unprecedented built-to-order-smartphone program — could’ve been. On top of the drawer, Wicks is pleased to see that a whimsical table radio he’d designed while at Sony has made it from the Libertyville offices. It looks a bit like an alien with eyes on long, thin stalks.

This is a particularly important place among the new headquarters’ many spaces and corridors. It’s the incubator for Motorola’s next-generation products, a critical source of ideas — money-making ideas — and the means to execute on them. Mike Jahnke, a bespectacled CXD manager with an awesome bow tie, tells me a story of how he’d made a custom RAZR in pink and had it sent to tennis superstar Maria Sharapova. She happened to use it on television (unscripted, he says), prompting a call to Jahnke from then-CEO Ed Zander. "Did you make that phone?" It wasn’t long afterward that Zander and team signed off on a production run of pink RAZRs, which ended up being a massive seller.

But it’s the large room adjacent, the model shop, that has Wicks most animated. Row after row of rapid prototyping machines — industrial-strength 3D printers, mostly — spit out ideas practically in real time as they pop into engineers’ heads. That kind of rapid turnaround is of particular importance for a product like the Moto 360, Motorola’s hotly anticipated Android Wear smartwatch, which is locked in for a summer launch and could be the most attractive and functional device yet in the nascent wearables market. Time is of the essence now, and there still seems to be quite a bit of work to do. "The ability to go broad fast and get to something that will completely mimic what that product is going to be at the end is hugely important and often overlooked," he says. "Prototyping is something that needs to be completely woven into the fabric of how you create strategies and products. It's not an outsource thing, so we see it as an integral part of our business and a great part of how we design now." 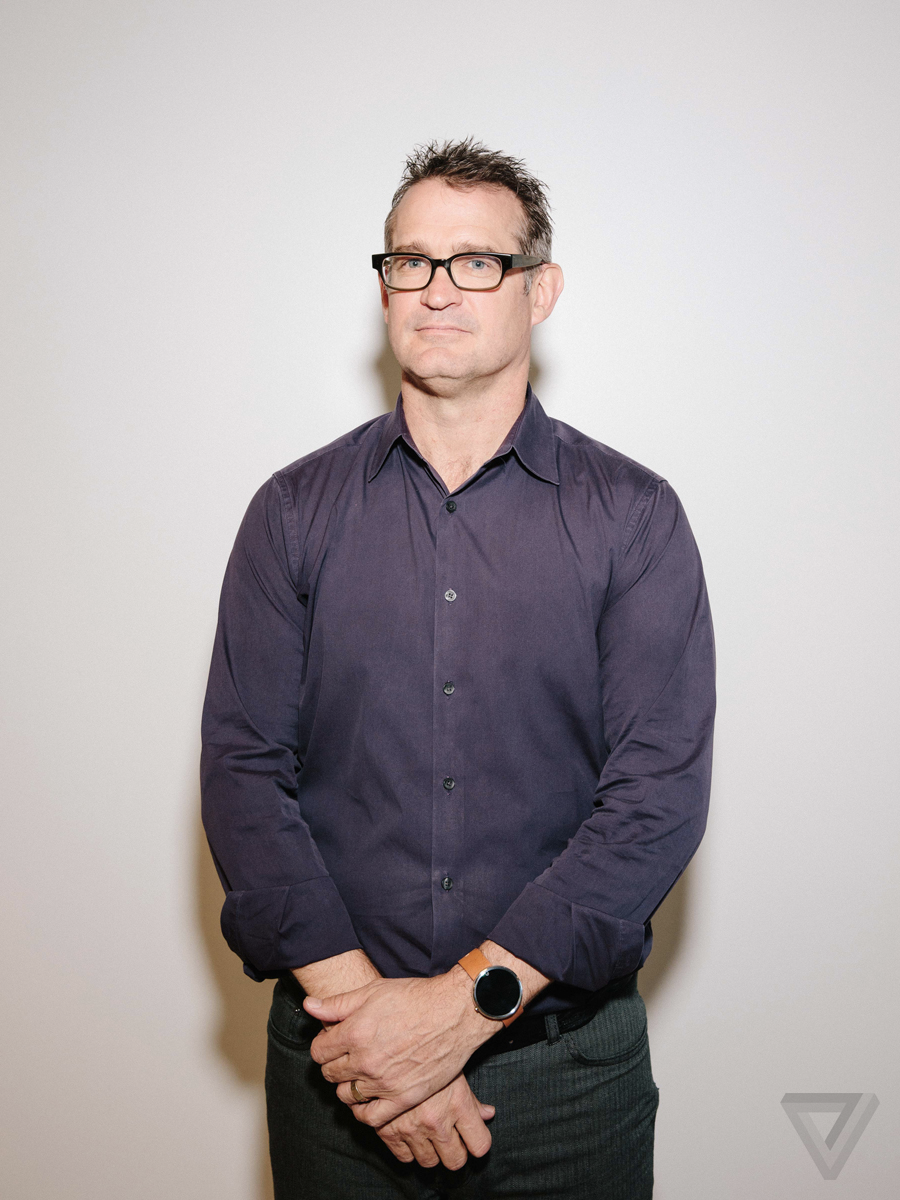 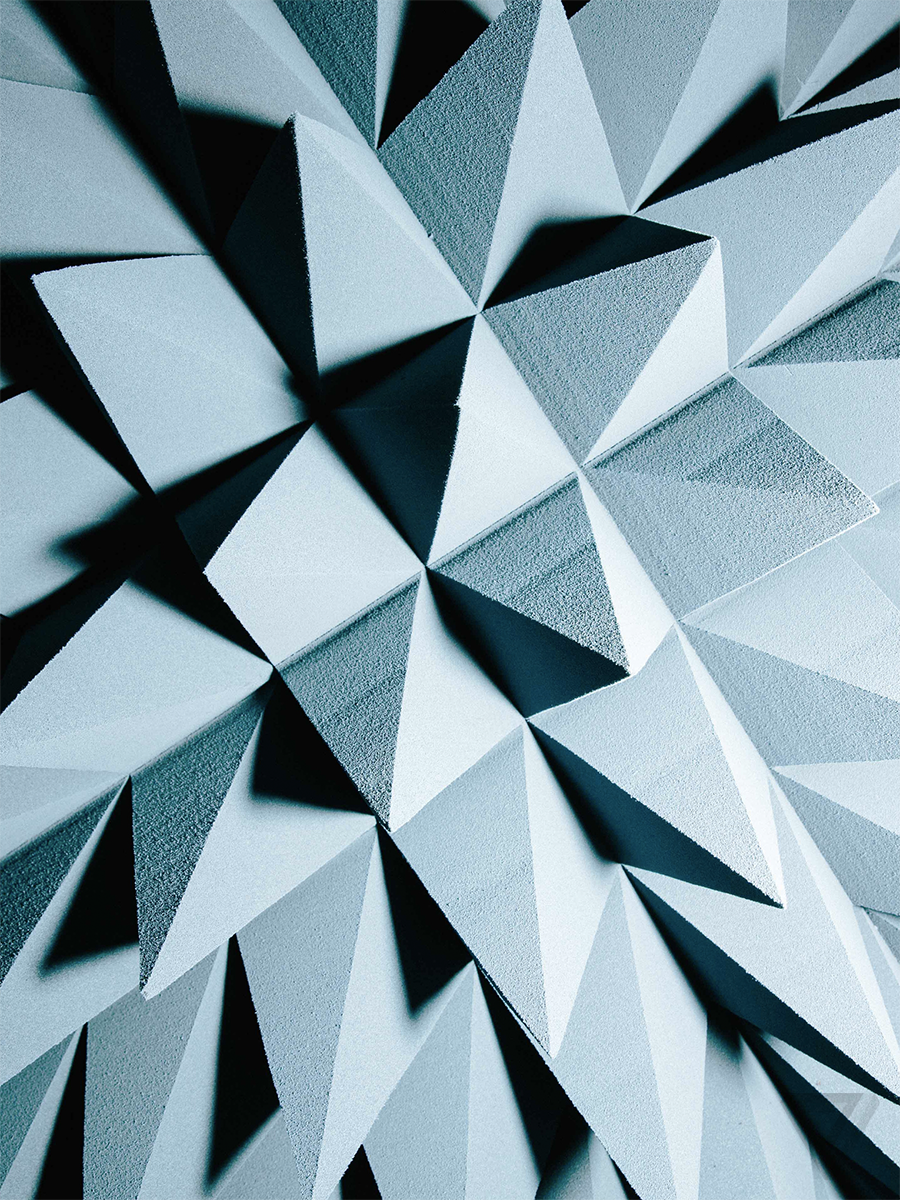 Left: Jim Wicks poses with the Moto 360 in the company's model shop.
Right: Detail of an anechoic chamber in Motorola's on-site testing facilities.

The model shop even maintains a table of consumer-grade 3D printers for employees who just want to mess around without going through the CXD team. A Makerbot Replicator 2 and a pair of Cubes — the kind you can buy at Staples for a grand — are all humming away on various parts. In fact, literally every machine in the room seems to be working on something. This is a busy company.

And it needs to be. While the Moto X and Moto G have been critically acclaimed, they haven’t vaulted Motorola back into its heyday; Osterloh notes during his opening speech that the company moved 6.5 million phones in the first quarter. That’s a 65 percent jump year-over-year, but Apple moved nearly 44 million iPhones in the same quarter. So while smartphones are a serviceable business, the fate of a Lenovo-owned Motorola may actually rest on its ability to pull off the 360 and establish itself as the most interesting, dynamic maker of wearables in the industry.

The MOTO 360 is simply glorious in person, but now, Motorola needs to ship it

From what I can see in my time with Wicks, Motorola has a fighting chance at pulling it off. As we chat, he’s "dogfooding" a beautiful 360 on his wrist in steel with a tan leather band, but declines to show it to me (after my desperate final attempt to get an up-close look, he hurriedly shuffled away). It’s as stunning in person as it looks in pictures. It sits perfectly on his wrist; if it weren’t for the blank circular display dominating the face, I’d swear it was a classic, premium watch — perhaps a Xetum. And although he wouldn’t let me play with it, the display turned on a couple times while we were chatting; it looked bright and crisp, the Android Wear UI simple and purposeful. Coincidentally, Wicks was around when Motorola released the $2,000 Aura phone, the first consumer product with an ultra high-pixel density circular display. I’d even told him the last time we spoke that such a display would make a perfect fit for a smartwatch.

It seems that he agreed. But if it’s such an obvious product, why is it just now happening? "Because it's really, really difficult," he tells me. "And I think we've gone through it enough that we knew if we really wanted to reinvent the timepiece, something with mass appeal and also high perceived quality, you can polish the other stuff as much as you want but you gotta do something that changes it fundamentally. Ship it three months later, two weeks later, whatever it is, do the right thing and do something that's meaningful rather than something you just put out there."

The only trick is, he has to do something that’s meaningful in the midst of Motorola’s most chaotic moment in its eight-decade history.