Selfie Alarm is the camera mode you've been waiting for

"This is a phone. With cool camera stuff." That's how Samsung's Philip Berne describes the Galaxy K zoom ("K is for camera... if you're German"), the company's latest attempt to figure out how to fully marry an excellent smartphone with an excellent camera. It's a technological achievement, with a retractable 10x zoom lens and 20.7-megapixel sensor crammed into the body of a smartphone. A thick, heavy smartphone more than twice as thick (20.2 mm) as the new Galaxy S5, but a smartphone nonetheless. And in addition to the camera hardware, the K zoom comes with a 4.8-inch, 720p Super AMOLED display, a hexa-core processor, and Android 4.4 plus all of Google's trappings. And it makes phone calls — this isn't just a camera that connects to the internet like the Galaxy Camera, Samsung says.

Of course, it's mostly just a camera that connects to the internet. A good one, at that: its 1/2.3-inch CMOS sensor is commonly found in mid-range point-and-shoots, and along with the 24-240mm lens that gets as bright as f/3.1, it appeared to take good, sharp photos even in poorly lit spots. The K zoom also shoots 1080p video up to 60 frames per second, and offers a nifty slow-motion video mode as well. 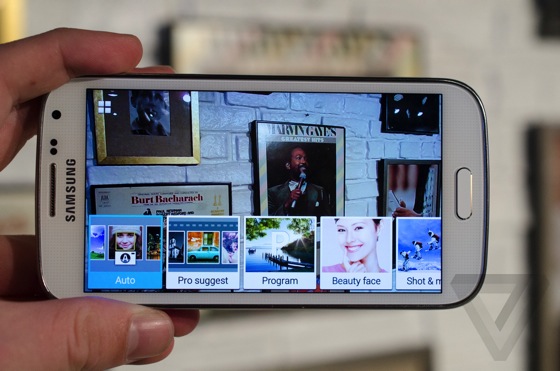 Most of Samsung's software enhancements for the Galaxy S5 are present on the K zoom as well, from the Ultra Power Saving Mode to the customized settings menus and S Health. The camera's been even further customized, though, and now includes everything from fully manual control to a new market for scene modes that users can set and upload for others to use. There's also Pro Suggest, which offers up to five such scene modes every time you half-press the dedicated shutter button; it'll suggest ways to fix strangely lit situations, or help you take the best landscape photo of your life.

Selfie Alarm is a useful feature with a truly perfect name

Then there's Selfie Alarm, the strangest and most aptly named feature of the Galaxy K zoom. Here's how it works: you turn on Selfie Alarm, then set the spot in the frame for where you want your face. Then turn the phone around and point the rear camera at your face — when you're in the frame, the K zoom beeps and then takes three pictures so you can select your favorite later. It works shockingly well, and lets you take full advantage of the camera's powers for your selfies. Every Samsung phone from now on had better have Selfie Alarm.

The K zoom won't be available in the US at launch, if ever. It appears to still be more a tech demo than a viable flagship smartphone — it comes in the same black, white, and blue dimpled body as the Galaxy S5, but it's big and thick and probably unappealing to anyone but the most dedicated photographers. Still, it's a huge step in the right direction for Samsung, a far more appealing product than the Galaxy S4 zoom. And it's another nail in the coffin of the point-and-shoot, because as soon as our smartphones have truly useful zoom there'll be no reason to buy a cheap camera ever again.