One last chance to sway the jury before they make their decision.

Apple wrapped up its side of a wide-ranging case against Samsung in court today, accusing it one last time of copying five features that it says ended up in millions of phones sold to US consumers.

"Let's remember how we got here."

"Let’s remember how we got here," Harold McElhinny, Apple's top lawyer told jurors. "We are here because of a series of decisions by Samsung Electronics." One of those was "month after month of frenzied activity" to copy features, he said, pointing to internal Samsung documents dug up during the trial that put prerelease Samsung devices side by side with the iPhone, and asked for changes to features and designs.

"We've tried to prove every fact from Samsung's documents," McElhinny continued. "They show what people at Samsung were actually thinking at the time. They never thought those documents would see the light of day."

The closing argument marks the last chance for Apple to make its claims against Samsung to the jury of eight who will decide the case. That group has listened to more than 50 hours of both companies calling up witnesses and lodging evidence as part of the month-long trial. Soon they'll be tasked with deciding which (if any) of the claims they agree with. That includes deciding a counter-suit by Samsung involving two of its patents against a number of Apple's iOS products. Apple wants $2.191 billion in damages, while Samsung's asking for $6.2 million.

Apple opened its case against Samsung earlier this month by asking jurors "where were you on January 9th, 2007?" (the day the iPhone was first announced). That was followed with a detailed narrative from Apple about how it believed the first iPhone came to shape the very existence of the modern smartphone market, and forever altered what came after it.

"Time changes everything," McElhinny told jurors at the time. "This may seem inconceivable to you ... but at the time, [the iPhone] was considered an extraordinarily risky project."

However, the thrust of this trial is about what Apple views as the second wave of phones and tablets (though mainly phones), that were sold beginning in August 2011, some four years after the original iPhone went on sale. That's an important distinction, and one that's made Apple focus less on the general look and feel of devices — which was the focus of the first trial — and more on specific features Apple says Samsung implemented without paying for.

"More than 37 million devices are at issue in this case. And unlike in fairy tales, we know Samsung's illegal strategy has been wildly successful," McElhinny said. "The only products that are selling today are Apple products ... and infringing Samsung products. It is literally a two-horse race." 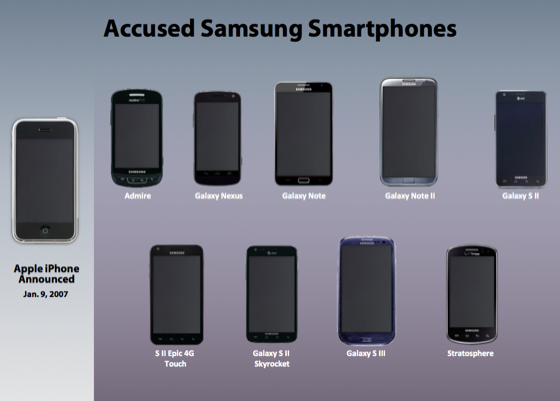 To make its argument over the past month, Apple brought in a mix of company employees, along with its top marketing executive Phil Schiller, to discuss how the iPhone and iPad came to be. It was a similar tale to the one Apple told in 2012, which swayed a jury of nine to award it $1.05 billion in damages. Apple then followed with expert witnesses who testified that they believed Samsung infringed on Apple's five patents covering slide-to-unlock, universal search, data synchronization, keyboard autocorrect, and a feature referred to as "quick links," which analyzes text for phone numbers and addresses and gives you contextual options when you tap them.

McElhinny took aim at Samsung for its choice of witnesses, saying the company had not called upon anyone involved with the creation of the accused features on Samsung's end.

"None of them were brave enough to come here."

"With the exception of one designer, every Samsung witness in this case works or worked for Samsung Telecommunications America during the relevant time period," McElhinny said. "Not one person to talk about how the infringing phones came to be ... none of them were brave enough to come here and face cross-examination."

Apple also used its closing arguments to address the very real conception that the lawsuit involves Google, a company that isn't named on the case, but has a deal with Samsung to back it over certain patents. Google's engineers testified on Samsung's behalf — something that did not happen in the first trial between the two companies. Samsung called upon Android engineers and leadership to explain features, which McElhinny dismissed outright.

"So much for the concept of a 'holy war.'

"So much for the concept of a 'holy war.' ... at the end of the day, Google should not be an issue. Samsung makes, issues, and sells," McElhinny said. "There is no claim Google makes any of these features. No expert came here and said they relied on it."

McElhinny closed by saying the lawsuit had come as a last option for the company.

"Bringing this lawsuit was Apple's last choice. Its last option," he said. "Apple cannot simply walk away from its inventions. Apple cannot do that to the people that you saw, and other people like that who worked so hard to work with such fabulous ideas. So we are here, 37 million acts of infringement later, and we are counting on you for justice."

Coming up next are Samsung's closing arguments. Just like Apple, the company gets two hours to make one last pitch to the jury to prove both that it did not infringe and that Apple infringed on two of its patents. Immediately after that, Apple gets one last chance to rebut those claims.