Samsung strikes back at Apple, saying it's really going after Android.

After being called a copycat and a coward by Apple earlier today, Samsung traded barbs of its own, saying flat out that it didn't copy, while once again arguing that the lawsuit between the two companies was really about Apple and Google.

"We didn't copy. Samsung didn't copy. They weren't told to copy. The engineers ... they didn't copy," said Bill Price, one of four attorneys presenting the company's closing arguments today. "Every patent which Apple claims is infringed in this case, is infringed with the basic Google Android software," Price continued. "They choose the Galaxy Nexus of infringing every one of their five patents here. And you heard [Google Android VP of engineering Hiroshi] Lockheimer say the source code was developed by engineers at Google."

That's a hot-button topic in this trial, which has stretched over the past four weeks and could be decided as soon as tomorrow. The complaint is only between Apple and Samsung, but Samsung's brought in a handful of Google employees involved with Android to help back it up on certain features. And according to Samsung, it would be remiss to think that Google wasn't the primary target for Apple.

"We know in October 2010 that Steve Jobs realized 'we need to start a holy war on Google,'" Price said, pointing to an internal Apple document about the company's plans for its ultra-secretive annual meeting with its top 100 employees. "Everyone was supposed to talk about Google and Android."

The closing argument marks the last chance for Samsung to make its claims against Apple to a jury of eight, who will decide the case. That group has listened to more than 50 hours of witness testimony and evidence over the past month. Beginning later today, they'll be tasked with deciding which (if any) of the claims by either company they agree with.

"Nowhere does it say 'lets make an iPhone.'"

Samsung began its volley against Apple today by picking apart documents — many that were its own — that Apple used to paint it as a copycat. Key among them was a memo between Samsung executives discussing a "crisis of design" at the company, and the need to change its mobile strategy. Apple brought out the same document in the 2012 trial with success, but Samsung said it had been misunderstood. "When you read about it, they are praising the iPhone," Price said. "Nowhere does it say 'let's make an iPhone.'"

Price also brought up a chart depicting Apple's own products which did, and did not practice the patents its using against Samsung as part of the case. He noted that you could go after another company for infringing a patent, even if it wasn't being practiced, but that "you can't copy something from the iPhone if it's not in the iPhone."

"There's nothing wrong with purchasing patents."

Samsung's core argument focuses on the value of software and features relative to the overall price of smartphones and tablets. Where Apple's argued that just five feature patents are worth $2.191 billion in damages, Samsung's gone the opposite route, saying that two of its own patents are worth just $6.2 million spread across millions of Apple phones and iPods sold during a two-year period.

After price went up, Samsung attorney Kevin Johnson propped up the company's patents and expert witnesses, pointing out that one of them covering video compression won an Emmy award, and helped TV stations stream video immediately following the Oklahoma City bombing in 1995. Johnson also played defense to Apple's criticism during the case that Samsung bought the two patents instead of buying them in house. "There’s nothing wrong with purchasing patents," Johnson said. "Companies buy and sell patents every day." 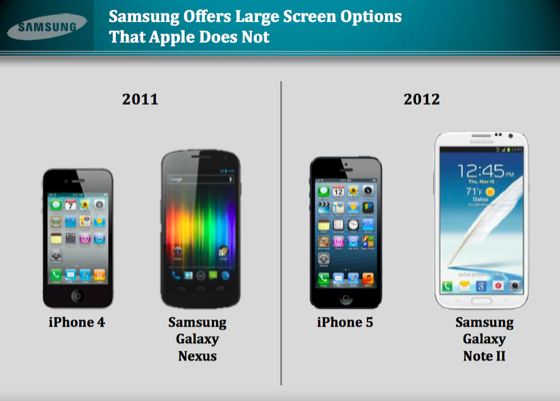 But just how much those patents are worth is one area where the two companies have dramatically different ideas. That's indicated in the damages amounts, but also how much Samsung's spent as part of the trial Apple, argued. In a rebuttal after Samsung's closing argument, Apple's attorney Bill Lee said that you just need to look at the $5 million the company paid a group of four experts considering its $6.2 million damages claim. "That was an intentional strategy," Lee said.

Throughout the trial, Samsung has instead talked up other features like screen size, removable batteries, styluses, and wireless technologies as key things consumers look for and use to decide their purchases. All along, it's hoped that will strongly contrast Apple's argument that these features help contribute to the core experience of using these devices, and — more importantly — why they buy them in the first place.

"We don’t think we owe Apple a nickel," Quinn added.

Money is what this is all about

Money and the companies consumers are spending it with are ultimately what this case is all about. Two years ago, in a similar case between the two companies over different patents and products, Apple went after Samsung over accusations it was making its phones and tablets look and feel more like Apple's. In the end, Samsung's argument, which fell on deaf ears, was that an Apple win would forever change the way competition worked in the US. That's still the case here, but more than ever it's leaning on features it's included that Apple hasn't yet, and relying on Google for help with that.

"I think what Apple needs to understand is the answer to that innovators dilemma — the one mentioned by Steve Jobs in that email — is not in the courtroom," Quinn said. Instead, he said, Apple should "come out with great products" like a watch, bigger-screened iPhone, and new set top box. "That’s what Apple should get back to doing."

Once today's arguments are out of the way, the decision about which patents were infringed on which products now to go a jury of eight men and women. After closings, that group will deliberate each and every weekday until they arrive at a verdict. It took a similarly sized group less than three days to do that following the 2012 trial between the two companies, something that could take even less time now given the smaller scope of this case.