Harman CEO Dinesh Paliwal says the technologies in the One can bring back the highs and lows lost during the compression required for streaming music, and it can better replicate the sound of a live concert through multiple channels. The phone also comes with a set of Harman Kardon headphones, said to be worth $249.

The carrier also revealed a new partnership with Spotify to offer its Framily plan customers with six months of free Spotify service. After the extended free trial, Framily plan customers with one to five lines will be able to get a discounted $7.99 per month rate for Spotify, while those with six to ten lines can get Spotify for $4.99 per month, half the regular price. Spotify CEO Daniel Ek called this partnership the "biggest deal we've ever made." The plans will be available to all Sprint subscribers starting on May 9th. 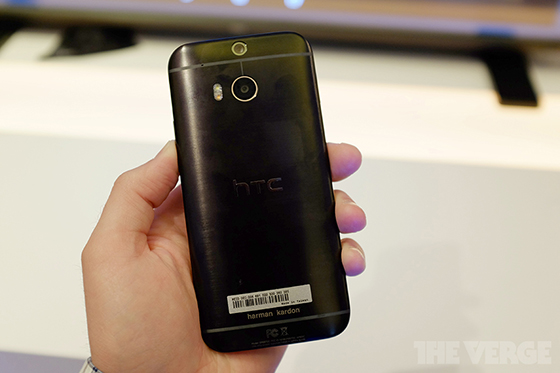 In a brief demo given to us, the two technologies in the special edition One did seem to enhance the audio in appreciable ways. Clari-Fi, the technology that is designed to restore the high-end frequencies lost during compression, did make the audio sound fuller and more dimensional without making it harsh or unpleasant. LiveStage is designed to simulate multiple channels of audio, which is most noticeable when viewing movies and other surround-sound sources. Importantly, neither technology muddied the sound or made it worse, unlike Beats Audio and other smartphone audio enhancements that tend to make the sound worse, not better. The One's 24bit/192kHz digital audio converter also supports playback of FLAC files, so audiophiles can load it up with completely uncompressed music if they wish.

The special edition One will be available on May 9th in all Sprint stores, as well as special audio retailers such as Crutchfield. Pricing has not yet been announced, though Sprint tells us that the special edition model will sell for about $30 more than the standard One.