Can a new approach to cervical cancer screening improve diagnosis, or will it jeopardize women's health?

The FDA last week approved a DNA-based HPV test manufactured by Roche Molecular Systems as a primary screening option for cervical cancer. Called the "cobas HPV test," the method detects DNA from high-risk HPV subtypes, and is already recommended for use alongside the traditional Pap smear.

But the FDA's new approval changes two distinct features of how the test is used and promoted: it permits the use of an algorithm that enables the HPV test to be used on its own, and allows Roche to market its HPV test directly to consumers. Combined, those factors could spell the end of the Pap smear as we know it — a move that opponents say adds unnecessary confusion to an already complicated screening process, and jeopardizes women's health.

Some cervical cancer cases don't start out with HPV

The American Cancer Society and the US Preventative Task Force recommend that doctors screen women ages 21 to 65 every three years using a Pap smear — a test that scrapes cells from the cervix. Alternatively, the groups recommend a screening procedure called "co-testing," which combines the Pap smear and the HPV test to screen women ages 30 to 65 for cervical cancer every five years. This is supposed to be more comprehensive, because a small percentage of cancer cases don't start with an HPV infection (caused by the sexually transmitted human papilloma virus) and another small percentage of cases don't present abnormalities detected through Pap smears.

Yet the new Roche algorithm, developed from a study that followed over 40,000 women for three years, disrupts the co-testing procedure. Instead of taking the cervical swab and putting it under the microscope as well as through Roche's HPV test, the algorithm eliminates the Pap smear in a majority of cases. Moreover, it introduces HPV testing for women age 25 to 30, a group that doesn't need to get tested for HPV under current guidelines.

This new process is supposed to increase early detection and stop more HPV infections from progressing to pre-cancer. But for the many groups who oppose the FDA approval, the possibility that some doctors might give up co-testing in favor of Roche's algorithm is disastrous because, according to them, this new screening procedure will cause confusion, yield unnecessary medical procedures, and could miss non-HPV cases of cervical cancer.

The FDA approval is a big win for Roche, because the company can now advertise the cobas HPV test to women 25 and up, as well as to their doctors. "Now that it's been approved, we are allowed to start talking about it with laboratories and clinicians," says Paul Brown, head of Roche Molecular Systems (which is owned by Roche), "so we can start to inform them about the new use for the test."

But last week's FDA approval does nothing to change current cervical cancer screening recommendations. Co-testing for women 30 and up is still the recommended procedure, and those recommendations won't change unless various medical societies decide to do so. So now that the HPV test has gained approval, doctors and patients who see Roche's new ads will be free to choose it over the Pap test alone or co-testing. "The practice of medicine is not regulated or controlled by the FDA," says Susan Wood, a former FDA official and current director of the Jacobs Institute of Women's Health, "what is controlled is the marketing of the product."

And it's the marketing of the product, combined with what many say is a lack of evidence regarding the test's effectiveness as a primary screening method, that's making so many experts and advocates uncomfortable. "We are not against the HPV test," says Diana Zuckerman, president of the Cancer and Prevention Treatment Fund. "We are just against it as a primary screen by itself, and as any kind of screening for women under 30."

The Pap smear and the HPV test seem exactly the same: both consist of a cervical swab. But unlike the Pap smear, which checks for abnormalities in cells taken from the cervix, the cobas HPV test pinpoints whether a patient is infected with one of 16 high-risk HPV subtypes — including two genotypes that are responsible for over 70 percent of cervical cancer cases. Under the new algorithm, women who test negative for HPV can go home without a Pap smear. Women who test positive for those two genotypes, however, go straight to colposcopy — a procedure that uses a magnifying tool to check a patient's cervix and vagina for abnormalities.

A patient would only undergo a Pap smear if she had any of the 14 other high-risk genotypes. In that case, a normal Pap test means that she will need to be tested for HPV again the next year rather than waiting five years.

But, according to a study published in 2004, about 4 percent of cervical cancer cases aren't HPV related. "If a woman has cervical cancer," says Marshall Austin, a gynecological pathologist at the University of Pittsburgh, "her HPV test will be negative about 10 percent of the time." In other words, the cobas HPV test doesn't catch everything.

Age is also a major area of contention. Prior the FDA's approval, the HPV test wasn't used for women age 25 to 30. "There is no evidence to support using the HPV test in women under 30, and a lack of evidence to support changing the current guidelines," says Nida Degesys, national president of the American Medical Student Association. At that age, Wood and Degesys explain, women often clear HPV on their own, so testing them earlier means that women risk undergoing a number of unnecessary and invasive procedures. "The evidence shows that persistent HPV is what puts you at higher risk," Wood says. "So the HPV test is recommended after age 30 — not earlier than that — because that's when persistent virus occurs, and that's when women start to see cervical changes." 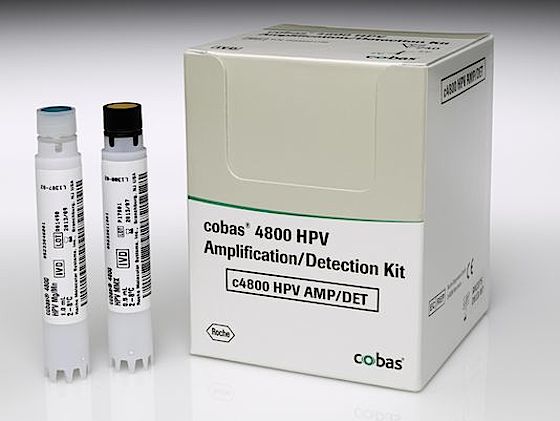 "an improvement in detection"

But a letter issued by the FDA on April 24th in response to the approval's opponents states that screening women age 25 to 30 for HPV leads to "an improvement in detection of 44 cases per 10,000 women," which the administration described as significant. "Up until now, the cutoff has been 30, and there was good reason for that because there wasn't much available scientific data regarding younger women," Brown, of Roche Molecular Systems, explains. The Roche study, he says, "showed that there was a surprising amount of women in that age group who had pre-cancer."

Opponents of the approval also argue that the new primary screening procedure will cause confusion among medical professionals. The screening guidelines are already "pretty complicated," Chelmow says, "and that's just with two choices: Pap testing by itself or co-testing." By introducing a third option, some patients may end up switching back and forth. "You will have the circumstance where a patient moves from being cared for elsewhere and can't get the records," he says, "and you can't really tell what tests they had, so you don't know exactly when to do the next one."

Of all the arguments against the HPV test, the most controversial is that the new procedure will cause more women to undergo cervical biopsies — a procedure that, in serious cases, can cause women to experience complications during future childbirths. The FDA refutes that argument, noting that under the current guidelines, 4.7 percent of women are referred to colposcopy — the procedure doctors use to decide if a biopsy is necessary. With Roche's algorithm, that number is 4.6 percent. "HPV primary screening is better than ‘current practice,'" the FDA wrote, "because it has the same percent of women being referred to colposcopy, but has an improved positive predictive value and similar negative predictive value."

"There is a level of subjectivity in reading Pap test slides."

And according to Roche, their HPV test is more reliable than a Pap smear: it uses a computer to detect specific DNA markers of certain HPV genotypes, whereas Pap-test slides are read by a pathologist. "There is a level of subjectivity in reading Pap-test slides," Brown says. The DNA test, he says, lowers this risk of a misread result because "the test runs on a fully automated instrument."

The medical societies will decide

Like the HPV test, studies have shown that the Pap test falls short in some cases. "We were able to show that 1 in 10 women who had a normal Pap had already gotten pre-cancer with HPV 16 and 18," Brown says. But given the current co-testing guidelines, some doctors argue that using both should identify risky and persistent HPV cases that come without cervical abnormalities, as well as any abnormalities that aren't accompanied by an HPV infection. "I tend to be a fan of co-testing," Austin says, "because you use HPV for its sensitivity and you use the Pap for its specificity."

Now that the approval has gone through, Austin thinks the medical community will simply have to wait and see how patients react. Unfortunately, he says, the approval will make it hard to decipher if the new procedure is really effective, because it's likely that most women will go through each screening procedure interchangeably. "I don't think the new test is a bad test," Austin says. "I just think that there is a lot we don't know." In the meantime, the Society for Gynecologic Oncology said it was developing an interim guidance document that will help doctors incorporate primary HPV testing into cervical cancer screening.

If medical societies do decide to change their guidelines, most women won't notice a difference; the cervical swab to which they're are accustomed will still take place. But under Roche's algorithm, the vast majority of swabs will be discarded after going through the company's machines. "Because the specimen was collected in a cytology vial, you still have the sample," that pathologists use to perform the Pap test, Austin says. The difference is that by using Roche's algorithm "you are just electing not to do a second FDA-approved test."