Dogecoin has its day: the unlikely success of a joke cryptocurrency

At the first DogeCon, enthusiasts celebrate 138 days of charity and community

Share All sharing options for: Dogecoin has its day: the unlikely success of a joke cryptocurrency

When dogecoin arrived on the cryptocurrency scene in late 2013, it was little more than a Twitter joke come to life — a play on bitcoin and the doge meme, two of the most successful internet trends of the year. However, just under five months after dogecoin officially launched, its creator Jackson Palmer and hundreds of members of the dogecoin scene gathered in San Francisco last Friday for the first-ever DogeCon: a way to celebrate the achievements of an unlikely community that’s sprung up around an online currency whose logo is a bewildered dog on the front of a coin.

Speaking to a packed room filled with several hundred dogecoin enthusiasts, Palmer took the stage to kick things off and look back at a "crazy" 138 days in a quick 15-minute keynote that touched the things that make dogecoin so unique in the cryptocurrency sphere: a community that doesn’t take things too seriously, a strong sense of charity, and a low value that makes it easy to spread hundreds or even thousands of dogecoin to strangers wanting to see what the currency is all about.

Investing in Dogecoin, pretty sure it’s the next big thing. http://t.co/yHR4bNv6OD

There’s no doubt that dogecoin has real value — its market cap has reached as high as $100 million. While its value has dropped since hitting that high, its current value of $37 million still marks it as the fifth-largest cryptocurrency in use. However, one dogecoin is still only worth $.000494 as of this writing, far behind the value of cryptocurrencies like bitcoin, litecoin, and peercoin. At this point, dogecoin is essentially like real-world Reddit karma — internet points that are nearly valueless in a vacuum but people still want to collect.

"We need to never lose sight of the fact that this is a dog on a coin."

That’s not something that appears to concern Palmer or the dogecoin enthusiasts attending the conference. When talking about where he sees dogecoin going in the future, Palmer stressed that it’s not about making people rich — at least not in dollars. "One doge[coin] really means one doge. The viability of a digital currency shouldn’t be pegged to what you can cash out." Dogecoin is looking to attract those who want to truly create an internet-native currency and have fun doing it rather than cash in on a fad. "You shouldn’t wake up every day and wonder what bitcoin or dogecoin is worth in USD," Palmer said.

"You shouldn’t wake up every day and wonder what bitcoin or dogecoin is worth in USD."

That low value plus Reddit- and Twitter-based "tipbots" (tools that let you send and receive dogecoin with a simple tweet or Reddit post) mean it is incredibly easy for dogecoin users to spread their currency around — Palmer announced that over $150,000 had been tipped via Reddit’s doge tipbot. Compared to bitcoin, it’s incredibly easy to start sending and receiving dogecoin (though cashing it out and converting it to USD is a more complicated process). That ease of use means that users are "strongly incentivized to keep it in the system and pass it along," says Jon Leland, a Kickstarter employee and dogecoin enthusiast who previously built a startup that lets you pay in dogecoin.

While one single dogecoin may not be worth much, the dogecoin community has proved to be surprisingly adept at rallying around causes and raising significant money. At the top of Palmer’s presentation, he recounted the notable charity donations that have taken place in the last few months thanks to dogecoin: the Dogecoin Foundation raised $30,000 for the Doge4Kids program, which aimed to send service dogs to families and kids in need, and another $30,000 worth of dogecoin was donated to help the Jamaican bobsled team reach the winter Olympics. Eric Nakagawa (co-founder of I Can Has Cheeseburger) started his own charity Doge4Water, which raised 40 million dogecoin that’ll be used to build clean water projects in Kenya, and the community even decided to sponsor a NASCAR driver to get him to Talladega next week.

"The projects I’ve done with dogecoin have been some of the most fun and interesting I’ve done in my life," said Ben Doernberg, a board member for the Dogecoin Foundation, the official charity arm of the currency. In May, Doernberg and Nakagawa will be releasing more details around future charity initiatives and how the community can take part in shaping where their dogecoin goes. "We’re working on making things as transparent as possible and we’re working on creating a more structured way for people to give us feedback," Doernberg said. 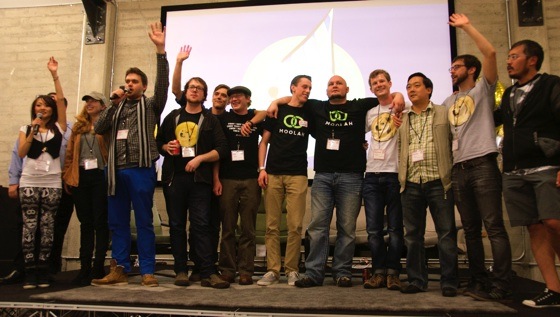 The generous community spirit is something that Palmer considers a key to the currency’s success. "I think one of the things that really stands out about dogecoin to pretty much everyone that I talk to is that ‘you’re the guys sponsoring all those cool charities,’" Palmer said. "Let’s keep doing it." That spirit of giving — whether it’s small tips, big charity donations, or simply helpful advice on the highly active dogecoin Reddit page — is a big part of the community’s desire to keep things fun. "We need to keep up the fun community spirit that we have," he said during his keynote. "We need to never lose sight of the fact that this is a dog on a coin."